Mike Rimmer met up with the pop punk rockers from South Carolina, ELEVENTYSEVEN 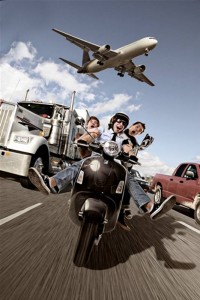 Hailing from Greenville, South Carolina, Eleventyseven are the latest American band to emerge purveying a brand of power pop punk already popularised by Relient K and Hawk Nelson. Their album 'The Land Of Fake Believe' is selling well in the States while in the UK tracks from it, "Teenage Heartbreak" and "More Than A Revolution" have been featured on Cross Rhythms Radio. The band are a three piece comprising Matt Langston on guitar and vocals, Caleb Satterfield on bass and Jonathan Stephens on drums. Originally Matt and Caleb played together in a praise band in church which eventually fizzled out and from the ashes emerged Eleventyseven.

If it hadn't been for a girl who drummer Jonathan fancied, he'd never have ended up in church. "Honestly," he admits, "she was the only reason I went. I wasn't a Christian at the time. But it was a good experience because actually, by going to that church and joining this band, although I was pretty much faking my Christianity to the people I needed to, I was actually able to really come to Christ in the whole experience."

I guess he isn't the first guy to attend church because of a girl! And it all ended well! "I got suckered into doing this Bible study. I was in the praise band so they thought that I should do the Bible study. The youth pastor just said one night, 'People are so confused about Christianity. They think it's a list of do's and don'ts and wrongs and rights. And it's not. It's just about a personal relationship with Christ.' And when he said that, like a lightbulb went off in my head. I started crying! It was really embarrassing. I was like, 'I'm sorry guys, I've been lying. I need to pray. I'm not saved. I need to get saved right now.'" And so he did.

Maybe 'The Land Of Fake Believe' is an apt title for their debut album, then. Matt shares, "I usually come up with all the song titles and a lot of times there's not really any relevance to the song in the title. It's just meant basically to be thought-provoking so that people like you will say, 'What does that mean?' It's just a reminder to keep imagination in what you do. But at the same time it's also a reminder to us to not be living there. To not be putting on these masks that we wear around other people or these personas that we identify ourselves with and just being true to what we know and what we believe and what our callings are."

The band have developed a sound which is reminiscent of other bands. Do they get frustrated with the Relient K/Hawk Nelson comparisons? Matt responds, "Those bands are doing well and even if they weren't, people are going to draw comparisons. I guess we're just thankful that people are thinking about our band long enough to form a comparison in their mind about it. So I mean, we're grateful for it."

Listening to this band play reminds me of all those old UK punk bands of the '70s. In America there still seems to be a huge market for punk-tinged rock. Matt agrees, "Yeah there definitely is. I think that when we first started out we became a punk band because we couldn't play our instruments that well! But we've hopefully gotten a little bit better at what we do. We enjoy writing music and writing fun, catchy music to just have fun or to uplift your spirit. So that's what we do. It's not like we're breaking any boundaries in music or doing anything that hasn't in some form been done before but we feel like there's a certain heart and passion about what we do that other people probably couldn't."

Caleb joins in with this theme, "The band has somewhat evolved and grown a lot because when we first started playing we were more concerned with being punk rock than we were at being good musicians or whatever. Two years ago if you'd have called us a pop/punk band we'd have probably fought you because we were 'hardcore'! But that was actually just, we were just teasing ourselves! Anybody can listen to our record a realise how un-punk we are and our vocals sound like a boys' choir." Jonathan adds, "We like punk rock but we're just not good at being it!"

What confession! So what is it that Eleventyseven are trying to do as a band? Matt explains, "We're a band and we just like to remind people to enjoy life and not focus on the negative aspects that so much music brings today. Not to be sad but just to be happy. To be alive. So if we have a 15-minute set we just want for 15 minutes for people to forget about all their trials and sorrows and everything and just have a good time. We're not here to be rock stars that put on a rock show, we're here to rock out with our friends and 'family'." I was waiting for something deep to come out of their mouths but that's it! Matt agrees, "That's it man! That's it. Sorry, we're not deep."

Well, I suggest, most Christian bands have some sort of idea, deeper than that, of what they want to do. Jonathan explains, "Well, it's just that there's such a massive movement now. I don't know what it's like in the UK but in America there are so many hardcore-screamo-emo bands and it's so depressing because it's just over-exaggerated emotional instability, basically that is what the music represents more often than not. And we're friends with hardcore bands."

Matt speaks up, "And we listen to it every now and then. But it's just like, there's too much negativity and focus on self in the music when it really comes down to it lyrically. I feel like it's got this wave of depression that's kind of darkening the music scene. We just kind of hope that somehow the Lord can use us to be a bit of a spark, or a bit of a brighter light than everything else; to try and put joy and happiness back into the music scene before it's stolen by emo forever!"

The band confess to being so busy that they don't have time to rehearse! "No," confides Matt. "We never rehearse! That's the thing, we don't have time. I'll give you an example: we've been on the road for two months now. We left our last show on the tour and went to Tulsa to shoot a video and left Tulsa to come straight here. We got here about two o'clock yesterday morning and we've been going non-stop. We still haven't been home to South Carolina. We're all very homesick and we're gonna go home for three weeks and then do it all over again." It's a hard life being in an up and coming pop punk band, eh?

I really like their music. I just saw them at Ocean City Tabernacle in Ocean City, NJ. It was awesome. My parents didn't like them, but parents never have good taste in music.

These guys are greattt!!!!
I wish that they would come to NJ or NY!!!!!
You rockkkk!! I love emmm!!
but also pensillvania (excuse my poor spelling) would be great!! I was going to go to the punk hall tour but i can't make it =( tty guys laterrr..

hahah these guys are amazing and its nice to have a band out there that wants to bring uplifting spirits not depressing music.

I love them so much.

oh gosh i've always loved these guys. there's just something about them that i can't quite put my finger on. they'll pretty much always be my favorite band though.