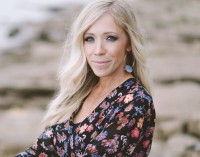 As followers of Nashville CCM well know, after years of relative obscurity as a member of her husband's Americana band Drew Holcomb And The Neighbors, Ellie Holcomb suddenly and unexpectedly became a major Christian music hitmaker. After a successful EP in 2011, her 2014 album 'As Sure As The Sun' became a major hit (number two in the US Christian charts and number 34 on the Billboard 200 album chart). Now the most delicate and expressive singer/songwriter has surprised her legion of supporters by releasing a children's book with an accompanying seven-song mini-album.

The book Who Sang The First Song? uses a lyrical tale to explore how God made the earth but also more importantly, why he created the earth and everything on it. On the accompanying mini-album 'Sing: Creation Songs', every song is tied to a specific Scripture and is inspired by God's creation-nature. On her website she said, "I was completely inspired by creation's song, whether it was birds, or the stars, or the trees reaching high towards the heavens, or flowers blooming so colourfully that they looked ready for a party." She added, "I wrote most of the songs for this record during the spring, and I'm pretty sure I ended up moving outside each time I wrote." The mini-album is true to her current style and lyrics, so unsurprisingly it is already the top-selling children's release on Amazon.

The reason she wrote the book in the first place was because of her four year old daughter who asked, "Mom, who sang the first song?" On her website she wrote, "I love how kids are always asking questions and how their questions often make me slow down and think about things in a different light. And I loved her question so much, I decided to not answer it in the moment, but do some research and write a book instead!" Throughout the process of writing the book and the music Ellie would test what she had done so far on her own children. She told fans on Facebook, "As I was writing the book, I realised I had a little test audience in my very own home. And I would come home from working on the book and read what I had written to the kids to see if they would respond and how they would participate. And if they didn't react or sing along I would just think to myself, 'I need to do better. I need to do better.'"

The opinions expressed in this article are not necessarily those held by Cross Rhythms. Any expressed views were accurate at the time of publishing but may or may not reflect the views of the individuals concerned at a later date.
About Alex Broad

Alex Broad is currently studying for a Masters degree in journalism and loves running.