Eoghan Heaslip: Grace In The Wilderness 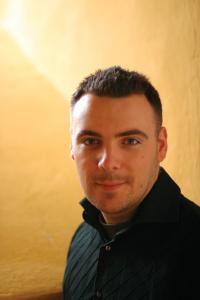 When the old Christian Retailer magazine wrote about Eoghan Heaslip in its May 2001 issue, he was a "new-to-the-CD-racks" artist. Since the release of Eoghan's 'Deeper Still' by ICC the worship leader has come a long way with albums for Vertical Music (released here by Fierce! Distribution) and regular appearances at events like New Wine. I caught up with the Dublin-based worship leader and songwriter after he'd returned from a ministry trip to South Africa and just before he threw himself into a worship conference.

Tony: Can you give me a bit of background about yourself?

Eoghan: I became a Christian on one the first Alpha courses our church ran about 10 or 11 years ago. One of the church staff at the time who was doing work with the youth, took me under his wing and while mentoring me taught me how to play the guitar and also started teaching me some new worship songs that we were learning as a church, Vineyard and Cutting Edge stuff (now Delirious?). In a month or so I was leading worship in a cell group for the youth. After a year or so I was given the opportunity by some church members to attend a worship training school Vineyard in Canada was running. From there I was given the opportunity to do a year's further training with a Vineyard church in Winnipeg, Manitoba, Canada. From there my wife and I were invited back to Dublin to be a part of the staff team here at CORE church.

Tony: How did you get involved with New Wine? What is special about the event?

Eoghan: As an Anglican church in renewal we found ourselves very naturally relating and belonging to the New Wine family of churches in the UK and beyond. I was first invited to lead worship there for the youth in 2000, then in 2002, 2003 and 2004 I was asked to lead some of the worship for the main stage celebrations during the summer events in Shepton Mallet. What I think is special about the NW event is their heart for God and love for the Church, for all people. The vision of the events run throughout the year is "Equipping churches to see Jesus' Kingdom grow" and when you're there at the events, all that they do and communicate point towards exactly that. The NW leadership team are an inspiring group of church leaders to be around.

Tony: How did you come to sign with the American company Vertical Music?

Eoghan: Four years ago I was involved with ICC. ICC's distribution overseas was done by Hosanna Integrity. They had heard some of the songs featured on the record I had released with ICC and asked if I would be interested in doing an album with them in the future and I said yes! Vertical Music is a part of the Integrity label group.

Tony: The press release for 'Grace In The Wilderness' suggests that the album has "a harder, rawer sound than its predecessor" while elsewhere in the same press release it talks about a Coldplay influence. Give me your take on the album and what you set out to do with it musically.

Eoghan: The sound of this new album is quite different to the previous release 'Mercy: Live From Dublin'. This time through I was able to be much more involved in the sound and arrangement side of things and I also chose the band I wanted to record with. With so many of the "first time through" things behind me I was freer to experiment and be myself. This had quite an influence on the sound. The previous release with Integrity was also mixed and prepared a certain way for the project to be an appropriate Hosanna release. Vertical is able to be a little rougher around the edges. So 'Grace In The Wilderness' really reflects what worship here in CORE church is like.

Tony: I understand the title song was co-written with Matt Redman. How did you come to work together?

Eoghan: Though I had met Matt before a number of times it was really this time last year where, while I was attending a songwriters retreat, I was lucky enough to spend more time with Matt. I was at a crucial, last minute phase with the album songs and I needed an experienced ear to help me finish off the project. After an evening together, he invited me to his home town to do some more hanging out and the song "Grace In The Wilderness" is the fruit of that time together.

Tony: There seems to be a never ending marketing push behind worship music. As a worshipper how do you view the praise and worship industry?

Eoghan: This is a difficult question, though vital to ask. I'm not completely sure there's a straight forward answer either. I am aware of the "marketing push" you mentioned. But on the other side of that I have found a genuine desire on behalf of the record companies to resource the Church. A lot of my closest friends are involved in working for and/or with record companies, and while some of what has gone on in the past has lacked integrity, direction and appropriate vocabulary there is I feel a new challenge that has been brought to the record companies by the present state of the music business around the world that has shaken things up. And people find themselves being returned to their core principles and values, things that may have been dropped or forgotten along the way.

Tony: Of all the songs you've written so far, which one would you say has made the most impact in the churches and why do you think that is?

While doing some ancestry research I discovered this man and his music. What wonderful music! In a sense I guess it was like finding a long lost brother. What a gift! May the Lord help you prosper in all you do.

It was a blessing to learn more about Eoghan. I have been blessed by His God given style and the words of the songs He sings expresses such Glory to our God.

I use American Sign Language to "sing" special music in our church. I am praying about two songs from Grace In The Wilderness and which of them God will lead me to sing. They are "How Majestic " & "You Are Enough". Bot brought me to tears and my knees in worship and grattitude to my Lord.

Thank you Eoghan for blessing me with the gift God has given you.