Esther Alexander: Our Best Gig... So Far, described by the pop/R&B singer

We ask bands and soloists to pinpoint their most memorable live performance. This issue British pop and R&B singer ESTHER ALEXANDER recalls a special pub gig in Birmingham. 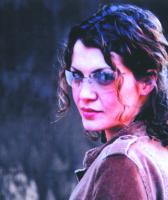 The most memorable gig I've done was in March this year at a pub, The Slug And Lettuce, in the Chinese Quarter in Birmingham. I had my producer Phil Baggaley playing guitar with me and another guy, Keith Dollinson, who was playing keys. So it was a pretty intimate thing. It was very much a home crowd. I think you get a bit more nervous when you've got a lot of your friends and people who've walked a long while with you in the audience. But it was amazing. There were loads of people there who wouldn't have normally gone to a pub gig. I just remember coming off stage and the barman, with tears in his eyes, saying, "I don't know what it is about your music but that was amazing," . just inches away from giving his life to the Lord! It was a really, really lovely gig.