You've heard her on Matt Redman albums. You've heard her on Vineyard and Spring Harvest projects. You may even have seen her at Soul Survivor, Re.vive or the Here And Now musical. Surely Christian music fame isn't far off for ESTHER ALEXANDER. Tony Cummings reports. 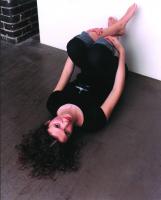 Esther Alexander's voice is one well known to Christian radio listeners. It featured on the Cross Rhythms radio turntable hit version of "As Sure As Gold Is Precious" on 'Spring Harvest Praise Mix '99' and is currently heard every day on UCB Inspirational who are giving mucho airplay to "Let My Heart Be Your Home" from the Vineyard UK album 'Holy'. Yet despite a few years of excellent recordings, until now Esther Alexander remains obscured by the anonymity of the praise and worship album even though festival appearances doing BVs for Matt Redman and a recent UK tour as one of the cast of the Paul Field musical Here And Now has surely alerted a sizeable Christian audience to the stunning vocal ability to the tall, willowy beauty who is Esther Alexander. Now with the release of the first recording where she gets full billing, an excellent R&B-orientated EP 'Esther Alexander', now seemed a good time to quiz a singer possessing one of the finest voices in UK Christian music.

I began by asking 26 year old Esther what, after her numerous recording sessions, did she rate her best three performances. "One of my favourite songs is on the 'Spring Harvest New Songs' album for 1999. It's by a guy called Jarrod Cooper called "King Of Kings, Majesty". For me it's not so much the performance but the situation in which I sang it that makes it special. We'd basically recorded the rest of the album and this was one of the last songs we had to do and that morning I'd found out that my husband had failed an exam by one percent and it was likely that he would get the sack. I was in bits and all the guys at the studio were totally gutted for me but we were all aware I still had this song to sing. This may seem like quite an over dramatic thing to say but I really felt a bit like Job in the Bible when God lets all this bad stuff happen to him. I remember thinking, 'I want to be like Job - God is still worthy of praise even in this situation.' But it was so hard to sing this song but at the same time it said everything: 'Your majesty I can but bow/I lay my all before you now/In royal robes I don't deserve/I live to serve your majesty.' I knew that even though this was so frightening that the only option was to say to God, 'OK, I'm really trying to trust you here and I want to serve you even though I don't understand what's going on.' Even now when I hear that song I can hear in my voice this kind of desperation for God and I guess the song just captures some of the reality of the situation.

"Another standout for me was when I was asked to sing on the 'Holy' album. I was even more excited when they asked me if they could put my song 'Let My Heart Be Your Home' on there too. However, more than singing my song I loved singing Vicky Beeching's song 'Awesome God'. The night we did the live recording was amazing - God was totally there. I'd taken a friend from work and it was so cool to see him wowed by this music, which he could relate to and yet it was about God! Also the guys playing in the band on that album are seriously talented and I felt really privileged to be involved and I just loved singing that song, worshipping and having this amazing sound that the guys produced all around me. It's pretty full on and although I naturally sing a lot of pop, to rock out now and again is a very good thing!"

"Of course I would have to say my best performance on CD to date is on my own debut EP, which came out in 2002. I have had the enormous privilege of working with Phil Baggaley and Mark Edwards who between them produced the four-track CD and they really pushed me - getting me to try things vocally that I hadn't really explored before. I can honestly say I couldn't be more thrilled with the result."

In view of the vibey, R&B-tinged sounds on 'Esther Alexander', I asked Esther whether she'd call herself an R&B singer. "I wouldn't class myself as an R&B singer of the traditional type by any stretch - I think of myself more as a pop/R&B singer because R&B now is so different. Having said that I am lucky to have quite a versatile voice so I'm not totally restricted to one style."

Born in Watford, Esther grew up at Chorleywood, Hertfordshire. Her parents were Christians and she attended St Andrews, Chorleywood, first the Sunday school then the youth group. She remembered how music took a hold of her. "My parents always tell of how at the age of five my primary school teacher told them that I could sing in tune and asked them whether they had ever considered getting me singing lessons. Thankfully my parents were very laid back about the whole thing and never pushed me into singing at all. They just felt they should wait and see what I was into when I was older. I am very fortunate to have parents who have always been into music and I really grew up with all sorts of music in the house - anything from classical to rock 'n' roll to jazz."

It was while a teenager that Esther found herself playing her first gigs. "I'll always remember my GCSE year as a great time for me and music. I was in a band with guys who were very into music but quite liked to use it as an excuse to bunk lessons! Somehow, although I wasn't really that naughty, I found that being with them in the band meant that we had a lot of respect for each other and that I could chat to them about God and they listened. For me this was so exciting and many were the times when they'd come over to my house and sit on my parents' patio smoking, having a few beers, and we'd talk about God and spiritual stuff. At that time not only was I involved with the guys at school but also I had just started to sing at church with this guy called Matt Redman who'd been in my youth group for ages. He'd just started to lead worship and I ended up singing with him. I went on to sing with Matt for a number of years and I just learnt loads, it was an amazing time!"

I asked Esther about her experiences touring with the Here And Now musical. "I had a really good time. I was singing with two guys - Paul Field and John Perry, and working with a cast and crew of about 25 and I really enjoyed it. We toured around the UK for five weeks and went to about 25 different venues in that time so it was busy but a lot of fun. It was great to meet so many people from all these different churches and because we had a local cast as well as a touring cast at every venue, every night was really different. Performing to anything between 500 and 2000 people each night was a really good experience for me and I managed not to lose my voice!"

So what, I asked, were Esther's hopes for the future? "I think that something that I learned right back when I did my GCSEs, playing with my pot-smoking mates, was that music reaches everyone and somehow it gives you an opportunity to say things through song that you could never say in a conversation. I guess I feel that what I want to do is get my music out there, outside the Church, to sing songs over people while they're having a beer or whatever. What I'd love to see, and this may sound a bit mad, is somehow for God to speak to people through these songs and spark a hunger in them for him. He would have to do it because I know that my songs alone are not powerful enough. One of my favourite stories in the Bible is when Jesus feeds the five thousand - because Jesus took the little the disciples had and made it something amazing and that's what I'd love him to do with me."