Reggae isn't all spliffs and Rastafarianism. And neither is reggae all made by musicians from Jamaica. Jan Willem Vink journeyed across Europe to talk to Germany's Heaven Bound and Holland's The Movements. 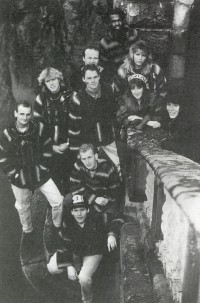 As shown in our recent article on Reggae Gospel (CR20), our interview with Marky Rage (CR23) and our soon-to-be-published feature on American sensations Christafari, reggae, for so many years the musical no-go area of the Christian musician is at last being embraced as an appropriate vehicle to communicate the message of Jesus. Extraordinarily, this latest development has not been limited to Jamaican-born musicians. Although Jamaica remains the obvious creative home for the sinuous rhythms of reggae it is now European musicians who are taking up the gauntlet, thrown down by decades of reggae's negative associations - with the cult of Rastafarianism and marijuana use - to create exhilarating variants of gospel. The development of Euro-gospel reggae has even taken Cross Rhythms reviewers by surprise. In CR23, Sammy Homer raved about Heaven Bound. "Get this - A GERMAN REGGAE BAND! These guys sound like what could happen if the Holy Spirit fell at a UB40 gig..." One issue later The Movements caught the attention of reviewer Tony Cummings. "Now hot on the heels of Heaven Bound comes a welcome UK release for The Movements from Holland who, like their German counterparts, know how to get a slinky JA-style groove." Here then are the stories of Europe's two ground-breaking gospel reggae teams:-

HEAVEN BOUND
Coming from the German Ruhr area is Heaven Bound, a band which is making quite some waves in the German Christian music scene, and even outside of it. I spoke with Jurgen Milkereit, singer and guitar player of the seven-piece band, which further consists of Rudi Pericki (bass), Thomas Meckel (keyboards), Sven Nowoczyn (drums, percussion), Heiko Nitsch (trumpet, keyboards), Henning Schneider (trombone) and Hans-Christian Rook (saxaphone). "The full horn section makes us something special," says Jurgen. "There is no other German reggae band with a horn section. Most of the German reggae bands make roots reggae.

"The members of Heaven Bound got their early influences when they were young," continues Jurgen. "Then there was the first big reggae wave in Germany, with artists like UB40 and Bob Marley. Those were our great influences. This was our music. We've been playing it through all the years. Out main influence is UB40, because we both have a very commercial approach. We are very interested in how the reggae scene is evolving. There have been a lot of new influences since Bob Marley died. There has been a lot of crossover between hip hop and ska and reggae. We use little bits of that. Especially live, we are stronger, we put in ragamuffin things and rap parts, there are lovers rock or roots reggae elements in our concerts."

Heaven Bound plays on a regular basis outside the Christian circuit as well. "There is a little scene in Germany with a few German reggae bands. We play a lot with these bands from this scene here in the Ruhr area. And we also played in the rock scene. Two years ago we won a special competition here in the area, in Nordrhein-Westfalen. That was good for us.

"Half our concerts are secular," says Jurgen. "Sometimes the other bands laugh a bit, but afterwards, when they hear what we say we get respect. Many people who listen to reggae are interested, because Bob Marley had a lot of religious elements in his music as well, like "One Love" and "Give Thanks And Praise To The Lord", so we also have one or two Bob Marley songs in our repertoire. In the German reggae scene, there are about 10 bands. Every band has been able to create its own style. There is no contrast between bands, because everyone has its own style."

A song which is very special to Jurgen is "Hey Little Man" which is based on the story of Zaccheus. "I read it very often. Everyone has heard it often since childhood and it struck me. Zaccheus took a risk. For me the picture of him climbing a tree is important, because I can identify with him, climbing a tree with everyone standing around and laughing and pointing their fingers."

A few of the songs on 'Reggae To Your Heart' carry political connotations. Jurgen comments: "Reggae always goes together with this element of 'stand up for your rights'. 'Solidarity' and 'One World' go along with that. I wrote 'Solidarity' for a national church day, which is organised in Germany. It was around the time right wing extremists were burning down houses of immigrants and other racist activities were on the rise again. Our musical style isn't white at all. If we were only able to use white influences, we wouldn't have anything left. So we combined in the song a lot of musical styles, like ethno samples, like the new reggae emerging from India, banghra, we took a little bit of that rhythm.

"'One World' basically describes how we have one world and should take care of it, because one day we have to give it back to God. Our music, with English lyrics, is suitable for the whole of Europe," concludes Jurgen. "In 1995 we are performing in Switzerland. We have played in France two times. We hope to tour with the Movements as well. We currently have one more CD to make in our contract."

THE MOVEMENTS
Coming from the north-east of the Netherlands are the Movements, a fairly new band, who released their first album, 'Running Out Of Time', before they had played any concerts.

There is a sense of urgency in the material of the Movements. The Movements boldly proclaim the return of Christ and don't refrain from making some social commentary as well. But that basically is the Movements' raison d'etre. Most members of the Movements became Christians in 1993. Peter Wezenbeek built a private studio and one after the other different members of the band came to him. Comments Peter: "Everyone came to us in a strange way, which can't be explained in human terms." Some were a part of bands that recorded in Peter's studio, others came because Peter put an ad in a national paper, in which he asked musicians to audition for a reggae band.

Peter enthusiastically shared his faith in Jesus Christ and the relevance of the book of Revelation for our time. "This book is as real as tomorrow's newspaper," explains Peter. "People can check it for themselves, with the way our world is evolving. People came here, stayed for different reasons and became Christians."

Peter's interest in reggae came in his early teens when a friend gave him a tape of a live Bob Marley album.. "I had never heard of him, but being a drummer I paid close attention to the rhythm. I was immediately sold. What this drummer did was unbelievable! This has such swing - I didn't know you could do such things on a drum kit. It was totally different from the blues and rock I played at the time. This music communicated joy to me."

It's especially Bob Marley's music that Peter are told all will be okay and Jesus loves them likes. "I don't like all different styles. I don't care about UB40. Drums and basslines are especially important to me. It's a more quiet kind of music, which is open and rhythmic and really joyful."

It is no wonder that the message of Christ's return, which played a main part in the conversion of most of the band members, is communicated from stage during The Movements' concerts. "The churches have destroyed quite a lot. It's no wonder so many churches are closing. It's an enormous work to convert a Christian. So many Christians are warning people for hell fire and damnation, but that really only puts people off. That's a real pity, because Christian life is so active and energising!

"As a band we don't want to chase our public away. But we confront them with what the Bible and Jesus say about our time, which usually results in a lot of questions. People are thinking about it and you can reach them with it. But we try to communicate it in a way that is not necessarily chasing them away immediately."

The book of Revelation is the book the Movements are trying to catch their audience with. Peter totally believes it is a message for our time. "If people become Christians, they are told all will be okay and Jesus loves them and they can be happy. That's it. Most of them never are told about the things which are to come. Everyone can see our world doesn't get any better. People are doing some strange things. Nations are fighting nations and the environment is polluted. But the church does not answer that. So most people who have become Christians have a hard time with that because they are promised a better life but don't see that reflected in our world. It's easy to lose faith if you don't get any answers, because you think the Gospel, which is the truth, can't offer you the peace you're looking for. Around the world, people are looking for the supernatural and the occult, because no one is giving them answers about the things that are coming, although everyone sees and feels it. That's why, on our first CD, we have put a lot of emphasis on this message."