Everfound: The pop rockers delivering the Gospel from Russia with love

Tony Cummings reports on a band from Pyatigorsk, now based in Denver, EVERFOUND 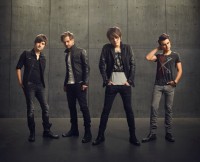 Recently Cross Rhythms radio added a track to its playlist "Never Beyond Repair" by Everfound. As it turned out, this signalled a little bit of radio history in that it was the first time a Russian origin band has made it to the heady heights of the CR playlist. Now based in Denver, Colorado, Evermore consist of four brothers, Ruslan (25), Nikita (23), Yan (21) and Illarion (19, also called Larry) Odnoralov. With US Christian radio as well as Cross Rhythms giving plenty of play to their Word album 'Everfound', now seemed a good moment to catch up on the band's history.

Everfound's Christian roots go deep. Nikita told New Release Tuesday, "We were born in Russia, in Pyatigorsk, that part of the country. That's where we were raised. I was six when we came over here, so I feel like as far as our heritage and our family, the way they raised us was still very Russian. In our house my parents really wanted us to keep the language, so you would speak only Russian at home. Hearing stories about how they suffered for their faith really inspired us and motivated us to make our music to be something that's deeper, something that's encouraging and something that's inspiring to our generation. When we hear stories like our great uncle spending 20 years in prison for owning a Bible and my great grandfather hiding and all these different things, it just really inspires us to dig into God's word, but to also have music that's bold about his Word".

Music making was always part of the Odnoralov household. Said Nikita, "Our grandparents were professional musical theatre actors in Russia and our grandmother taught us all classical piano since the age of six or seven. My parents are incredibly talented, and actually if you see us live, my dad is controlling the sounds. My mom helps with managing the band. When Ruslan was around 12 or 13, he wrote his first song and since then we've been writing and playing music."

By 2006 the brothers had formed Everfound. Nikita spoke about Everfound's name. "The name was made up by Yan and Ruslan one day when they were driving around town thinking about how much they disliked our old band name. The meaning came later. We like to say the name comes from the idea that Jesus expressed in John 10:29: 'For my Father has given them to me, and he is more powerful than anyone else. No one can snatch them from the Father's hand.'"

By 2007 the band had recorded their first EP, called simply 'Everfound'. Wrote IndieVision, "If you tire of music that sounds like it was birthed out of some mass-market factory, then you'll like - no you'll adore - Everfound. The indie pop-rock band goes far beyond uttering silly love songs set to a soundtrack of commercial clutter. They've created deep, contemplative and interesting music that relates to everyday living."

Another EP, the three-song 'Anticipation', followed in 2009. An enthusiastic review on the IndieVision site contained a quote from Ruslan, "We believe that a lot of people in the United States today have fallen away from the Christian beliefs and principles that this country was founded on and we are praying that the Christians in this nation may awaken and begin praying and doing something to reach the lost instead of forming business establishments. . ." Later that year the band's full length album 'Colorful Alibis & Scandalous Smiles' was released. At its release Ruslan said, "The process of recording this CD was very different from any of our previous recording experiences. We wrote over 50 songs for the album, 12 of which made the cut. We've been writing for over two years for the record and when it actually came time to record we did most of the pre-production work ourselves in our living room and our producer Tommy Collier helped out some when we went into the studio. When we began tracking we took a lot of time making sure we were happy with sounds and such. This was different from our previous recordings where there was typically a major time crunch. We had more time to work on this record and we've already began writing songs for the next album. We're hoping to have an even larger catalogue of songs written to choose from for the new record we're hoping to start recording this winter. We made it a goal to release at least one album every year. Record it during the winter, and tour with it during the summer months."

In 2010 came the last of the band's independent releases, the five-track EP 'Dawn In Our Eyes'. Enthused IndieVision, "The EP starts off with the very catchy 'Disappear'. That pulls you in with its entrancing melodies and hooks. This song is mainly piano-driven (like most of the songs on this album) but is backed up by a solid rhythm with both the guitar and drums."

Everfound were signed to Word Entertainment/Warner Bros in 2012. Said Nikita, "If we were just trying to be famous, we would have signed with a label a long time ago. But those labels didn't share the vision for our band. When Word came along, they got it, they let us be ourselves." When released in July 2013, Word's 'Everfound' album received hugely enthusiastic reviews. JesusFreakHideout wrote, "Destined to be a classic is 'God Of The Impossible'. With an arresting melody that rings in your head way after the song is over, 'God Of The Impossible' is an infectious prayer of faith. Utilising Isaiah 6:8 as their template, the quartet proclaims: 'I won't back down 'cause I believe/You are the God of the impossible/Here I am, send me.' Inspired by a friend who felt that she was beyond God's gracious grip, the current single 'Never Beyond Repair' is Everfound's response. And their answer is encouraging, Godly, Gospel-centred and such a delight to the ears. . . Among the slower songs, 'Take This City' is a highlight. Calling to mind lyrically Chris Tomlin's 'God Of The City', this Brit-rock beat ballad is a call for Christ to revive our cities. The cinematic effects, the use of auto-voicing, the crashing use of drums at its climatic moments, make this song a work of art itself."

In the same interview Everfound told the story behind their single "Never Beyond Repair". "We wrote the song after hanging out with a friend who had made some decisions in her life that hurt her and people in her life. She felt like she was too far gone to ever have hope and we realised that we all have felt like that at some point. However, Jesus promises us that he came to give us life and life to the fullest. We believe his forgiveness and love, which he offers to anyone who is willing to believe in him, is the proof that we are never beyond repair. After we wrote the song, we realised we were the ones who needed to hear that message of hope."

For more on Everfound visit the Everfound artist profile