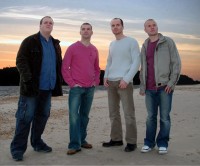 One of the most hard-hitting albums of recent years has been the 'Evilution' album by Hampshire-based rock band Glo. The band's lead singer Steev Jordan is grateful for the enthusiastic reviews but doesn't agree that 'Evilution' is a "concept" album. He emphasises, "Concept albums such as Queen's last (proper) release 'Made In Heaven' and more recently Mariah Carey's 'The Emancipation Of Mimi' have a common theme running throughout the songs. Much as we would have loved for this to be the case with 'Evilution', if we had done so then we'd have left ourselves with no platform to release our other songs! There are several songs on the album that support the theme of creation more directly, most notably the title track. Some might expect us to have 'got it out of our system' now and move onto other topics, but rather the battle against evolution has become fundamental to our ministry so it seems certain that we'll be writing more songs on this theme, perhaps delving into specific subjects. I would say rather than this being a one-off concept album, consider it a warm-up - the next album is likely to hit even harder."

A great deal has happened to Glo since the release of their 'Intense Expectation' EP in 2001. Explains Steev, "In February 2002 the Lord put a burden on our hearts concerning the current state of unbelief in the UK and how even the Church had defiled the word of God, by embracing the biased teachings of humanistic evolution. Whilst we recognised most outside the Church still believe 'science' proves there is no God, what was more disturbing was just how many within the body of Christ increasingly compromise the truth of the Bible to accommodate a belief in evolution. In fact the more we spoke to Christians about the issue, the more we realised the scale of the problem. In one vision, I saw a huge, heavy, dirty rug being ripped out beneath the feet of people in Britain. As they fell to the ground many were being caught by sure footed Christians and brought into the Church, as others staggered around and the dust of confusion began to settle, I could see other Christians moving amongst them, administering help and support which was now being recognised as a lifeline to those who had fallen. I believe the rug represents the thin but heavily soiled foundation of evolution, and the people are the millions of believers and non-believers who have trusted and based their lives on this Bible-crushing belief system. I understood from this vision that God was imminently going to remove this great deception from our culture and when he does his Church will experience a mighty harvest, as people everywhere will be desperately searching for somewhere else to anchor their lives.

"It has long been our passion to help restore the nation's confidence in the word of God, by showing them that it can be trusted in all areas and I guess this issue has now become the main focus of what we do. Reinforcing the efforts of our parent organisation RAID Media, our aim is to see the scientific 'facts' about life's origins correctly represented in education and the media, and evolutionary theories presented as such, rather than as factual information. Although not exclusively, we do see the music of Glo as being like a 'standard bearer' for the ministry as a whole."

Another major project Glo have been working on is the evangelistic web resource The Matrix Of Life (www.thematrix.co.uk). This website in non-religious language presents scientific evidence about the origin of life on earth. Steev is passionate about the necessity for Christians to embrace a creationist world view and feels that evangelicals who have embraced the theory of evolution have effectively brought a Trojan horse into their camp. Says Steev, "We want to strengthen people's faith by showing them they can rely absolutely on the word of God right from Genesis 1, not weaken their faith by showing how evolution and Christianity are strongly opposed. Think of it as removing a blindfold so people can read God's word without secular bias.

"What many don't realise is that scientific evidence is the same for evolutionist and creationist, the difference being only in the interpretation. The evolutionist looks for the best explanation that excludes any possibility of Divine intervention, regardless of how improbable or impossible the theory might become, but always disregarding any evidence that challenges the age of the earth. This is because he needs the earth to be billions of years old to accommodate evolution. The fact that much of the evidence points to the earth being less than 20,000 years old is kept quiet. In contrast, the creationist doesn't exclude God from the equation and is free to consider historical evidence from biblical events. A creation scientist, although often ostracized in secular science, is therefore not pressured into having to shoehorn the evidence to fit a pre-determined mould.

"After discussing just a few topics it doesn't take long for open-minded people to realise that evolution is primarily an atheistic religion, taught as fact in spite of, not because of, the evidence. Many leading evolutionary scientists acknowledge that the evidence points to a creator but refuse to run with it. Jesus believed in a literal Genesis, Scripture clearly teaches a literal Genesis and it's only been compromised to accommodate the billions of years required for evolution. It's also worth mentioning that many creation scientists would welcome a public debate with any leading evolutionist, but more often than not, they are denied the opportunity. As most evolutionists know, if they did enter the ring of debate, they'll lose the fight on account of their defence being only smoke and mirrors. Right now they still have the media and the education system at their disposal and don't want to allow creationists the airtime. They know if they opened the door even an inch, a deluge would follow."

For more on Glo visit the Glo artist profile