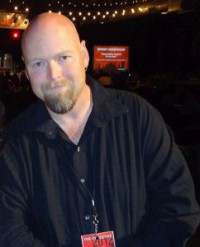 A burly American rapper and a British punk rocker stand locked in conversation by a trestle table full of places of quiche, sausages and sandwiches. It's a couple of hours before showtime on the last but one leg of Britain's first Extreme Tour, a music and sports initiative that has grown and grown across America and has now gone international with tours operating in over 20 countries. I've come along to the Extreme event, held in a less than salubrious area of Burslem, Stoke-on-Trent to find out more about an initiative that, since its inception in 1994 has reached hundreds of thousands of young people with the message of hope in Jesus.

Hundreds of Christian music acts down the years have played Extreme events. That afternoon I'd gone into www.theextremetour.com to see what acts besides US rapper GalleryCat and UK pop punk band Peter118 are prepared to play for free to audiences tiny and vast. There are in truth only a few names I recognise - Nashville's White Collar Sideshow, Japan's Imari Tones and Supreme of The Wu Tang Clan. But I'm bowled over by the sheer quantity and diversity of Extreme Tour's 2016 associated artists - be it metal, singer/songwriter, R&B, classic rock or hip-hop - who are prepared to give their play-for-nothing support. Resisting the attractions of the food table I locate Extreme Tour's founder Ted Bruun.

The history of the Extreme Tour goes back to Idaho and 1994 when an event called The Extreme was launched to reach at-risk and counter-culture youth, using extreme sports and cutting edge music. Ted spoke about its beginnings. "It all started with just me and a group of friends wanting to express the love of God. We said, 'Well, how do we do it?' One guy had a car, another guy had a sound system, another was in a band and when he told his friends in other bands he was going to do this tour - just going into parks in inner-cities, trying to demonstrate the love of God and create a party for people who feel forgotten - there were other bands who said, 'I'd like to be a part of that.' Everybody brought their own instruments, their own stuff. We would stay with relatives and friends, then eventually as it grew we started asking churches if we could stay on their floors, and pretty soon they were giving us homes to stay in and feeding us as well. In that model what has happened is the needs we've had have been met by this growing movement of artists. If we're going to come to the UK, for example, everybody teams up. Family and friends, aware of this calling on our life, said, 'We want to help.' We have all come for free."

There have been thousands of Extreme Tour events; I don't even know an exact number. We go to a hundred cities every year in the United States alone, and we've been to about 20 different countries. It's a co-operative effort so literally nobody's paid, not even me. I'm the founder and the executive director." 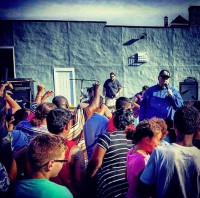 Giving the fact that counter-culture youth from places as diverse as New York City, Iwaki in Japan and Stoke-on-Trent find themselves drawn to Extreme Tour events what are they likely to get out of it? "We want people to have their burdens lifted - if just for a moment - and we're hoping that they will hear us when we talk about not just things we have in common. We know what brokenness is, we know what pain is, we know what it's like to feel alone, what it's like to hide. When we also talk about the answers we found in Jesus, we hope it might mean something to them. But even if it doesn't, even if all they get is a moment where their burden can be lifted maybe that will transform their perspective a bit. The next time someone tells them Jesus loves them, instead of thinking it's not true - it's a trick meant to sell them something - they'll remember that moment they had in the presence of God where something else was tangible, and say, 'Oh, yes, Jesus. I've experienced a little bit of him. I might want some more. I don't necessarily know if I want "religion", but I do want to know more about Jesus.' It would be wonderful if we would reap a harvest tonight - if people would respond and we'd see with our eyes lives changed; we'd be fine with just sowing a seed though, becoming part of what eventually will become a harvest. If all we get to do is prepare the soil, so that next time the seed is sown it's received, we will have been a part of that process. In the end it's the Holy Spirit who draws all men unto him; the Holy Spirit who convicts men of their sin; the Holy Spirit who speaks; and the Holy Spirit who saves and sanctifies. Our job is to be obedient, to let Jesus live through us, so that somewhere in that sowing, harvesting, preparing process, we allow Jesus to use us as a vessel in that season.

"I came to the UK a few months ago with a friend to meet with some of the folks helping us do some of the little events we're doing right now. But when we do a full Extreme Tour here in the United Kingdom, like we would like to do, we will bring 30 to 50 team members, which would be bands and hip-hop guys, extreme sports guys, a sound system. This movement of people goes into the public square and throws a party for a community. Right now this is coffee shops and churches, interacting with kids left after midnight in the square because they don't have a home to go, and just seeing, 'Is this what the Lord is telling us to do?' We have been overwhelmed at what God has done the last couple weeks as we've been moving around the country. We are convinced this is where the Lord is leading us next. We feel like he wants to do something very special in the United Kingdom that we believe is going spread through Europe and even around the world. We believe strongly that his hand is moving to the outcast and the forgotten. That Last Days' move we're talking about we believe is going to come through that culture, the unexpected places, because he is always hanging out with the prostitutes and the tax collectors and the violent, sword-wielding rednecks. That just is the character of the God we serve. We sense a simmering of what God is about to do here. We feel very strong this is where God's called us. I brought my friend Angelo (rapper GalleryCat) to sense and discern with me. We're convinced and compelled there's something being birthed here."

I have the utmost respect for Ted! Way to be bold for Jesus friend! God bless you in your efforts to reach this lost and dying world for Jesus! Prayers coming your way!