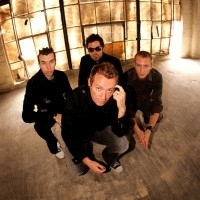 Rock acts bringing side projects into being have been part and parcel of the Christian music scene for years now. Current Underoath's drummer Aaron Gillespie is enjoying great sales success with his band The Almost while Relient K's Matt Thiessen occasionally releases tracks by Matthew Thiessen & The Earthquakes. But possibly the longest established side project is the Toronto-based pop punk band FM Static fronted by Trevor McNevan who, of course, is also the leader of best sellers Thousand Foot Krutch. Their three albums, 'What Are You Waiting For' (2003), 'Critically Ashamed' (2006) and 'Dear Diary' (2009), have all sold well. The only two official members of FM Static are frontman McNevan and drummer Steve Augustine with other musos guesting on the albums and occasional gigs.

Toronto-based McNevan told Jesusfreakhideout how 'Dear Diary' came into being: "The last couple years, I've been into trying to create music a little more theatrically, and I'm a big movie fan. I think it was a little bit stemmed through that, but nothing specific. It was kind of just a really inspired record, man. It wasn't even like, 'Here's when we've gotta start writing this, and here's when we've gotta record it.' It just kind of came about. It was refreshing, man, and I had a blast. I love just writing in general, so I got to write a story based around the subject and kind of let the songs tell the rest of the story. It was a lot of fun. My buddy Nathan Parish, who plays for Worth Dying For, did all the illustrations throughout the record. We were also blessed to get this amazing animator from Germany. He does a lot of incredible stuff, including the three FM Static videos for the record. All the videos are animated, we're not even in them. It's kind of fun, actually. It's gonna further tell the story of the boy [from the diary]. It's a whole different way to approach a record. It was as inspired as when I sit down to just right anything. It wasn't contrived. With the way you write stories, there's a little more thought that has to go into the overall big picture. It was just a very natural progression."

'Dear Diary' is very much a concept album about the adventures and misadventures of a character called Aero. So how did Aero begin life? "Actually, we didn't name him until right before the record came out. We wanted to do a blog online where he introduced the story a little bit at a time. It seemed a little unidentifiable to have him be nameless, so we just called him Aero Static. Tricia Brock from Superchick, who is actually married to our guitar player, is a really good friend of mine, and she's kind of the female voice in the story. The boy calls her 'E.T.' because he's just blown away by this girl. It was so fun, man. I'm excited to just share the music with people. We've gotten a really encouraging response from it, which has been awesome. It was kind of freaky because I've never done the story concept thing in the past. So you don't know if people are just gonna bypass one half of it and just listen to the music. It really is kind of a "read and listen" experience. It's good, we were blessed."

McNevan was asked how much of 'Dear Diary''s high school story was actually based on the musician's own experiences. "Some of it! I love that stuff, just the whole high school thing. I loved it then, I love it now. There are a lot of little parts in the story that are kind of just honesty of talking about things that I remember thinking. Things like big life questions, and also things that seem so big when you're in high school and then you look back at them now and think, 'That's hilarious, it totally didn't matter.' So yeah, it kind of takes a journey through a lot of that, and then some of it is fictional. But that was kind of part of the fun of that. We get a lot of emails and letters from fans and some of that can be inspired from some of that as well, like stuff that I haven't personally been through. Ultimately, I hope that people can enjoy it and understand the meshing together of the two and hopefully relate to it in some way. I didn't have a jaded high school experience but I was definitely more into socializing than academics, which isn't cool when I look back. I thought it was at the time. But yeah, it was good. I love people in general. The funny thing is that it wasn't like, 'Here's the musicians.' With my brothers, I'm in an athletic, sports-driven family. They've all played professional sports at some time. I was kind of the only musician. . . period. My family can't even clap on beat. So I was just used to that world. It was this weird mesh of hanging out with jocks and musicians and people in between. I was kind of thankful for that actually. I'm in some ways a little more rounded than some of my musician friends who would feel uncomfortable 'over here' compared to 'over there'. It was kind of interesting. I moved around a little too. I went to a Christian school for a little bit. I went to public school for a long time, and then I actually just finished pursuing music from home school."

A lot has fallen into place since FM Static began in 2003. Tooth & Nail Records released 'What Are You Waiting For' and to everyone's surprise it moved 60,000 units, a big figure for a side project. One press release described FM Static's rock 'n' roll credo as "just fun. Unabashed, summertime, walk in the park, roll-down-your-windows-on-a-road-trip kind of fun." Buoyed by the success of 'What Are You Waiting For', FM Static's 'Critically Ashamed' again caught the ear. The infectious "Flock Culture" is a clever put down of celebrity lives and attitudes, a theme also echoed in "The Next Big Thinga". Now 'Dear Diary' completes the trio of zany fun-filled punk pop albums. As well as Tricia Brock the album also features Randy Torres from Project 86 on guitar.

One of the most outstanding tracks on 'Dear Diary' is "Take Me As I Am". Trevor admitted that parts of the song were written even before 'Dear Diary' was thought of. He recounted, "My little brother - he's amazing, he's a hockey player. He plays pro hockey in Germany, actually. He's always listened to demos through my iPod. We've had thousands of demos over the years, so he's always listening to them. He was working out one day because he trains for a living. He called me up out of nowhere and was like, 'Man, what's up with this one idea? How come you haven't used this? I love this song!' It was something we were working on for the second FM Static record and it just got lost in the mix. So I listened to it again. It was just funny, because there was only a quarter of the song there, but it just tied into the story and that moment. I was at that point in the story where I felt like something needed to change. It kind of became that moment. I felt like it was a good point in the story for Aero to be like, 'This is me, though I'm not perfect. This is who I am.' So it kind of just worked out really well. The rest of that song was finished kind of just by taking that 'take me as I am' theme into the story."

yeah 'take me as i am' is a great song plus the video is brilliant too it's like a cartoon really clever.