One of the pioneering initiatives in establishing Christian radio in the UK, FLAME FM, broadcast in the Wirral over Easter. 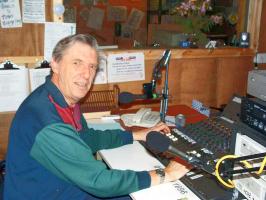 Over Easter radio listeners in the Wirral had an opportunity once again to listen to round the clock Christian music. Their volunteer presenters add their individual styles to a rich variety of music.

Since June 2000 Flame FM has broadcast for two months each year, recently with round the clock coverage, and has clocked up 4,500 hours of broadcasting. Flame are certainly fulfilling their mandate of "touching Heaven and changing earth."

The signal flows well from the Storeton Tower, strategically placed on one of Wirral's high spots, and covers the whole of the Wirral peninsular plus parts of Liverpool, Warrington, Chester and North Wales. Flame manager, Norman Polden, said, "In my car in Alpraham, south of Chester, I could receive both Flame FM and Cross Rhythms City Radio." He added that "it's great for us to be able to network Cross Rhythms City Radio during the weekend nights, because Birkenhead and Liverpool are alive and kicking up to at least three am; so we bring a night beat to the streets."

Flame recognises the cultural diversity of Merseyside and has been regularly broadcasting 60 minutes in Chinese on weekdays, recorded in-house by members of the local Chinese community - Liverpool having the oldest established Chinese community outside Asia. And in March Flame celebrated St Patrick's Day on air with a mix of Irish secular and Christian music.

Norman notes that "our music styles vary but Flame majors on good UK artists who keep us up to date with their CDs. We also encourage local musicians to get out of their pits and onto the airwaves via our "Frendz" (www.frendz.com) activities and concerts. We will be giving local folk centre stage at our huge Flame gig planned for Birkenhead's Pacific Road venue in October.

Flame has caught the eye, or rather the ear, of many people as an up and coming community radio station with a vision for full time broadcasting. UK Christian News featured Flame in its January programmes on UCB TV and the God Channel. Norman makes a positive contribution to the CBC (Christian Broadcasting Council) which represents the "lean and hungry" UK Christian broadcasters.

Find out more by visiting their website on www.flamefmwirral.org.uk or give them a call on their studio phone 0151-643-1696. And tune to them on 87.7 FM if you are in the northwest in March or September.