Flourish Scotland: A 24/12 praise, preaching and prayer event in Glasgow

Lins Honeyman spoke to Chris McCrosson of FLOURISH SCOTLAND, an ambitious time of praise, preaching and prayer that will last the entire duration of the 2014 Commonwealth Games in Glasgow in July

For the people and nation of Scotland, 2014 promises to be a monumental year with a referendum in September that will see the small but resourceful country either become an independent state or continue to function as part of the United Kingdom. Add to the equation the 700th anniversary of the Battle of Bannockburn - a significant Scottish victory over Edward's English army in the Wars of Scottish Independence - and the hosting of prestigious international sporting events such as golf's Ryder Cup at Gleneagles and the Commonwealth Games in Glasgow and the scene is set for Scotland to take centre stage like never before.

Recognising the magnitude of this year, Christian ministry organisation Flourish Scotland has been set up by Auchterarder-based Chris McCrosson, in partnership with Christian charity More Than Gold, to facilitate worship and preaching throughout the entire 12 days of the Commonwealth Games with the hope of seeing lives, communities and even the nation transformed through the release of God's blessing. Taking inspiration from Glasgow's original motto "Let Glasgow flourish through the preaching of his word and the praising of his name," McCrosson and his team are preparing for what they have coined a "24/12 Encounter" in which a variety of different speakers and worship artists will help form a non-stop 288 hour period of praise, prayer and preaching from the very start of the Games on 23rd July through to the closing ceremony 12 days later.

I meet up with Chris McCrosson in the paper-strewn office of his Auchterarder home and, despite the apparent confusion of piled up reference books, reams of literature relating to the Commonwealth Games and an array of unfiled paperwork that suggests that this man never stops, he is crystal clear about the significance of this year for his home nation. "2014 is absolutely crucial for Scotland," he stresses. "God can use events like the Games to galvanise his people and I feel that, with the likes of the Bannockburn anniversary and the independence referendum also happening this year, we have an opportunity to position God as first in our nation. That's something Scotland has forgotten how to do and we need to place God as sovereign in our country like never before."

I ask Chris to explain more about how he sees the Commonwealth Games playing a part in this objective. "The idea is to have this time of praise, preaching and prayer for the entire period of the Commonwealth Games but we're keen for it not to be just a worship event so we will also be setting up things like creative prayer spaces where people can come in and respond to God," he advises. "There will be a lot going on and our desire is to use Glasgow's motto as a springboard to enable the whole of Scotland to flourish by the preaching of God's word and the praising of his name."

Thankfully, Chris has the support of his specially formed team at Flourish Scotland as well as working in partnership with More Than Gold who oversaw a similar worship project at the London Olympic Games in 2012. I ask Chris, who has been appointed chairman of Flourish, how it all came about. "Flourish Scotland is an organic ministry which grew from a meeting with one of the More Than Gold leaders," he clarifies. "She heard about my vision after hearing a talk I did on community transformation. I had been sharing about a 72 hour worship event a group of us from different local churches had organised when the G8 summit was on in Auchterarder back in 2005. She then asked me to come on board because there was interest in making something similar happen at the 2014 Commonwealth Games. Originally, it was going to be a one day event but I felt early on that it needed to be a continuous effort right through the Games."

It's clear that Chris' involvement in facilitating worship during the 2005 G8 summit has formed the building blocks for Flourish Scotland's plans at this year's Games as well as helping him see the value of church unity. "Doing the G8 event has given me experience of involving both the mainstream congregations and the charismatic, independent churches," he advises. "There can sometimes be a tension between the two groups and what we're trying to do with Flourish Scotland is use the experience gained during G8 and be as inclusive as possible so that all different kinds of churches can work together. We want to foster spiritual unity and inclusivity amongst the full Church of Christ and that togetherness is something we want to build upon as a legacy from our involvement with the Commonwealth Games." 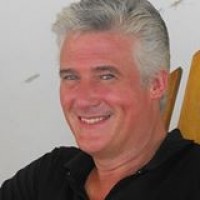 It seems that early signs regarding Flourish Scotland's plans for the Games have been a source of encouragement for Chris. "I'm delighted about the way the team at Flourish Scotland is working together," he confirms with a smile. "There's been a very quick bonding and acceptance of ideas between us all and that's absolutely crucial to the success of what we're trying to achieve. Also, the external response to what we're trying to do has been very good. People who have heard about our plans have immediately caught the vision and want to get involved but the main challenge is reaching out and getting as many people on board as possible in order to make this all happen. There are only four months to go until the Games but we trust in a God who can go beyond our imagination and possibilities."

Whilst the reaction amongst Christian circles has been understandably positive, I wonder what the average person attending the Games will make of what Chris and his team are attempting to achieve. "Back in 2005 during the G8 summit, there were many local people who weren't believers or church-goers who would come along to a cafÃ© that the local churches had set up," he recalls. "It was a place where the public, the protesters and the police could come in and mix, talk and have a cup of tea together. During the Games, we're aware that there will be non-believers who will come to see what we're up to and the hope is that they will experience something that they're not quite familiar with and something that will be attractive to them. We're also making prayer ministry teams available for people who want to have a relationship with Jesus for the first time or have known the Lord previously but want to re-engage. We're praying that, through these and other things, the love of God will touch them."

With Scottish singer/songwriters and worship leaders such as Scott Nicol, David Marshall and Mark Spicer already signed up, Chris is aware that a lot more acts will be required to make this ambitious project a success. "We want people to spread the word that this is something that will leave a legacy and impact on the land," he states. "It's something that people can get involved in that will help start the spiritual transformation that Scotland needs. In that respect, we are looking for worship leaders, preachers, prayer teams and the like to get involved. The more people we get involved over the 12 days that the Games are on, the less stamina everyone will need!

"Ultimately, we want to see God glorified in Scotland," continues Chris. "We've largely become a faithless society because of complacency, relativism and secularism and we have to ask where the people of God are in all of this. Unless we as Christians start moving, praying and praising together, we're not going to restore faith in God in our land. I find it very interesting that God would position what we're doing at the Games before the hugely important and pivotal independence referendum in September because we need to find new patriotism - a patriotism for God - that goes beyond any independence debate."

Chris is clear about how important Flourish Scotland's involvement at the Glasgow Commonwealth Games is in the grand scheme of things. "We have to find a new passion for God," he states in closing. "It's a passion for putting God first in our country in order to seek the very best for the nation. If we as pastors, speakers, leaders, worship artists or church members can't become passionate about worshiping God then it's going to be a much harder journey. It's about having that passion stirred within us to enable us to move with what God wants us to do. I sincerely believe we can achieve this during the Games if we all pull together and it will be something that will make this year's Commonwealth Games truly unforgettable."

More information about how to get involved with Flourish Scotland at the Glasgow Commonwealth Games can be found at www.flourishscotland.com.