Fono: A song-by-song rundown of their 'Goes Around Comes Around' album 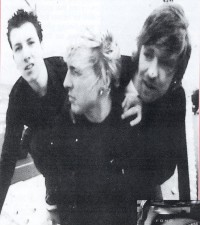 "Collide"
This, the opening track on the album, is about worlds colliding, be that physical as in relationships or cultures, to the spiritual and the positives that can arise as a result. We tried to get a little excerpt from an old '50s movie called Worlds Collide but we couldn't get clearance in time so we used some talking from the phonograph pictured on the sleeve. It pops up in the middle eight and if you listen close you'll hear the voices talking.

"Under My Skin"
This song talks about something being so much a part of you that you almost breathe it. For us as a band, our relationship with God isn't something we put on for Sundays, but it's there all the time.

"SOMETHING MUST BE HAPPENING"
Although this is a very jolly, poppy sort of tune but if you listen to the verse lyrics they're pretty heavy. You need to check it out really. I find it amusing when it's referred to as our pop song.

"Pretty You"
"Pretty You" is about someone who looks like all is well on the outside, but inside feels pretty screwed up. There's a loop pops up here on the record if you've got the patience to listen all the way through. It's a bit of an experimental thing but it's got all sorts of sounds on it from breaking cups to kids' toys (none of which will be recognisable as their original state). A big reason for it is to give the listener an ear break and vary the sound up. If you listen to the whole album closely there is always something interesting happening.

"Strangest Thing"
This is actually a tune we've had for a while. It's about God's love for us, it's the strangest thing, and something I'll never fully understand.

"Alcatraz"
The movie Murder In The First inspired this song. You need to hear this song to get the full impact. If you haven't seen the movie it's basically a true story about a young boy who gets locked up in Alcatraz for stealing five dollars from a Post Office to feed him and his 12-year-old sister and as a result he ends up in Alcatraz. Because he tries to escape, he's sent to the 'hole' (a small room about five foot by three foot) where he stays inside the room for three years solid. When he's finally put back with the other inmates he freaks out and kills one of them. When he's tried for murder the case is turned on its end and the establishment end up on trial. The system tried to break this man's spirit. He bent until the system broke.

"Goes Around Comes Around"
This is a little hidden minute and a half ditty. I recorded this in Nashville at 6:30am the morning before I flew home. It was the last thing to be tracked on the record, and for me it sums it up perfectly.

"Now She's 24"
I always say "Now She's 24" is the Irish in me. It's a story type lyric about a young lady who has had some experience when she was young. Finally she starts to talk about it and get it out in the open. The story finishes with her finding Jesus. What her problem was isn't mentioned, but many people will be able to put their own experience into the song.

"Burn"
The song "Burn" is simple desire and passion, "take this life, it's all I have to give." We'd recorded this song previously but we decided to give it a slightly grittier (if there is any such word) edge, so we did it again for the record.

"Pusherman"
Believe it or not, a George Formby-type ukulele kicks off this song. When we were in Great Linford Manor Studios, we found out the groundsman played the ukulele and sang. We meant to get him to record it before we hit the States to mix but we ran out of time. So he sang and played the first verse on to his answer machine and we called up from America, put a mike on the telephone and recorded it.

"All Falls Down"
"All Falls Down" is the epic finish to the album. We used a real string section on it and for me it brings the album to a great conclusion. I've had some great experiences while recording the tune and afterwards as well. During the session one of the guys who were in the studio was just sitting quiet as we were listening back to a vocal take. When we spoke to him he didn't answer and after a few prompts he finally answered. The lyric for him was all about his troubled relationship with his mother and it had really moved him. For me, I wrote it about something completely different.

For more on Fono visit the Fono artist profile