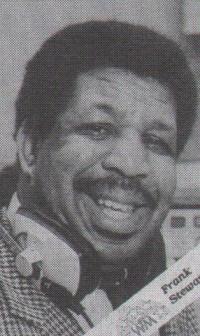 Wherever you are in the Midlands, Frank Stewart is the name every gospel enthusiast looks to hear BeBe and CeCe, John Kee, Milton Brunson and hundreds more. His show is on three stations, BBC Radio WM, BBC CWR and BBC Radio Stoke.

When anybody ever gets around to writing a history of black gospel in Britain, the Singing Stewarts will be worth a fare few paragraphs. Their happy, calypso-style music paved the way for funkier forms of gospel back in the days when the British church had seemingly ossified on hymns ancient and ancient. The Singing Stewarts are still going but now there's another important string to the bow of their veteran leader Frank Stewart.

"In the programme there's plenty of variety; speech, brain-teasers and very special guests," says Frank. But Frank wants more. "I do wish I had a load more time to explain the Gospel. I know that in God all things are possible so I'm just praying for more time."

Frank's popularity is unquestionable. With letters and phone calls from as far away as Liverpool, Manchester, Wales and Oxford, he's a long way from the five minute spot "Sound Systems" that put him on air. The 'Frank Stewart Gospel Hour' is not the only Christian programme broadcast from Pebble Mill, the home of BBC Radio WM. On a Sunday morning, Michael Blood broadcasts the religious affairs magazine programme 'A Word In Advance'. Frank doesn't agree that this doubling up highlights a black/white divide in the church. "It's good that Michael has a morning programme and I have an evening programme because this ensures people get two of the very best Christian programmes right here, in the Midlands."

03:00 o'clock, can't sleep, found an old cassette with o happy days on it, put it on, maybe this helps me relax.
Played this record so often in my youth, you have no idea.
Loved it and still love it.
So i looked this up.
Sorry to read mr Stewart has passed away.
I have warm feelings with his music, still, 40 years later.

I went to school with Franks Son, met Frank through him and other members of the family. Spent a good few nights at BBC WM and found Frank and all of his family kind friendly people. Frank was a dear friend to me and will be missed.

love you granddad from kee

Frank and The Singing Stewarts were always a popular group in concerts and as regulars at The Jug A Punch Digbeth, long gone but forgotton. Thanks for the memories.

A gentle giant who knew how to make you laugh even when you didn't feel to. Frank you are missed.
Dear Stewarts family near and far, just hold on in there and to each other.
from Jen and family.

We would like to give our best to family of Frank. He would have been proud of the great send off you gave him. We also thank you for allowing us to be part of the day you all Celebrated Franks Life.

We are only a word away. Be strong.

We would like to pass on our best to Franks Family of the sad loss of Frank.

He will be greatly missed, a big friendly giant.

He was a the heart of gospel music in the Uk, thank you Frank for the times we have talked.
My prayers to the family too. R.I.P Frank