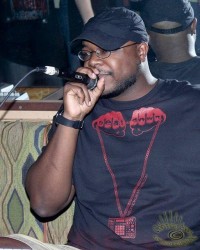 Texas-based MC and producer, Freddie Bruno dropped his debut album, 'The Ballpoint Composer', on Uprok Records in late 2002. He's no stranger to hip-hop, having guested on albums by artists like Rhymes Monumental, BPM, Ill Harmonics' latest album, BK & Associates, and had production credits on songs such as "Black Market" from Mars Ill's 'Raw Material' album, three cuts on BPM's 'Ambidextrous' album, and others.

Like many, he got into hip-hop at an early age. "I guess I got into it when I was WAAAY young. I had seen a Run DMC video and had no clue what they were saying and tried to recreate what they did. As the years past I kept on writin' raps (which were terrible to say the least) and all that. I guess that's the usual story. After awhile I tried my hand at producing on a really wack Yamaha keyboard thing. I made all types of strange stuff on that thing."

Freddie also makes half of the crew, Phonetic Composition with Playdough from Ill Harmonics, who have under their belt the 'PC Tools' album, from a year or so ago. In turn, Phonetic Composition make one of the many crews that form supergroup Deepspace 5. Freddie explains, "I hooked up with Phonetic Composition cause Playdough and I thought it would be dope if we did a project together, being that we work well together and were close friends it was just a perfect match. Deepspace is another story, I was working for a large hotel chain and was clownin' around on a message board one day. And this dude named Soulheir the Manchild (Mars Ill) contacted me. Well, long story made short, he wanted to do a song with Playdough and needed to contact him so I forwarded his request to the almighty Anglo from Amarillo [Playdough] and they created 'Black Market' on a beat that I submitted. Then we gradually all became friends and the rest is history."

His artistic vision is, as he states, to "show the world that Christians can have fun too." He goes on to expound, "I know that sounds corny, but one thing I have learned is that people have this idea of how things should be, and to me it's cool to think outside that idea and create something original and creative. In other words I want to be ME. I want to do the music I like, the beats that I like, and keep hip-hop as what it once was... FUN. Now there's too much politics and egos... not a lot of elbow room. Pardon me if I speak in metaphor too much.To sum up my answer, my main vision is to infiltrate the mainstream as some dude who loves God and is a great MC. And can be successful with his integrity still in tact!"

Freddie showcases extreme versatility, production-wise, from the "Elementary" cut he produced on the Deepspace 5 album 'The Night We Called It A Day' to the smoking "Bombay Hut" submission for BPM's last album, to the hilarious folk music sampling "The Monitor" on his own LP - he is soon becoming one to watch on the production scene. His lyrical style is probably the major thing that has changed about Freddie's career. Comparing his style on his solo album 'The Ballpoint Composer' with some of his work on 'PC Tools', it's clear to see that he has sharpened his skills and gained a lot of confidence. From putting sub-par MCs in their place, to commenting on the eccentricities of internet hip-hop fans, to tongue-in-cheek lamentations of the life of a poor Christian MC, he seems to have found his niche.

His road as an MC hasn't been easy, however. Freddie details some of the problems he has faced. "I wish I could tour more. Unfortunately 'Christian RAP' only makes but so much amount of money, unless you're some gung ho youth group rapper. I have been on one tour with Ill Harmonics and KJ-52 but nothing since then. For that same reason, I have a wife and a son here that I need to think about before I even get to me. So the only struggle is being able to do what I love and support my family with no problems." However, he has seen God do things with his career and life. "He humbled the crap out of me!" he exclaims. "Too long a story to go into but he just smacked me on the back of the head and broke me down. I can tell you this, I had this sort of chip on my shoulder but now that chip has dissolved. And I'm a new Freddie Bruno who doesn't care what people think. But only what GOD thinks."

Big things are in the pipeline for Mr Bruno. Apart from working on his next album, which will be entitled 'Hold Music', he is putting in work for his fellow DS5 comrades. The album by Labklik's Illtrip features a cameo and beat from Bruno while Listener (Labklik), SintaxTheTerrific, Ill Harmonics and Mars Ill all have albums in the works with some production from Freddie. If that wasn't enough, Stu Dent (Tunnel Rat/DS5 member and Sev Statik's alter-ego) has a collaboration with Freddie. All in all, we can expect to see Freddie "keepin' busy, sellin' beats, rappin' and keepin' it crunk" for awhile.