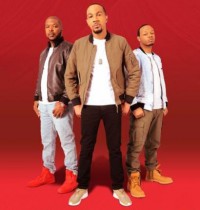 The trio known as GI (God's Image) have enjoyed considerable gospel chart success since their formation in 1997. But they've also endured more than their fair share of disappointments as they encountered the harsh realities of the gospel music world. Now at last their slick R&B gospel with its hip-hop rhythms and taste of old school soul flavour is bringing them through to the big time. Their "Pray And Don't Worry" has been a major US Gospel radio hit and their album 'Winning' released through Shanachie is shaping up to be the most successful so far.

The group's origins go back to 1997 when in Richmond, Virginia, Branden Anderson and his brother Marlon formed a gospel trio with their buddy Avon "AC" White. They performed regionally but after a year White left the group and was replaced by Curtis Langley. In 2003 Curtis' high school classmate Lamonte Harris joined in they operated as a foursome for almost a decade, building a solid reputation on the east coast. In 2009 GI released the album 'God's Image'. It peaked at number 18 on Billboard's Top Gospel Album chart with their single "Get Up" remaining on the Gospel Songs chart for most of the year with their video reaching the number one position on Gospel Music Channel's chart. Their second album 'The Next Dimension' peaked at 15 on the Gospel Album chart and has again generated a gospel radio hit with the song "Forever We Will Worship".

Branden admitted, "There are so many disappointing stories. Before we got our first deal, we thought we had a couple of deals but they fell through. We've had many disappointments but the passion outweighs it all." Marlon left the group in 2014 as did Curtis Langley. But then a new group member joined GI to take the team to a new level. Rufus Johnson was a high school teacher working in North Carolina who Branden had known since they were in the third grade. Said Lamonte, "Growing up, Rufus was the man we all wanted to sing like. We all went to Henrico High School back then. I was kind of fan of Rufus before he even joined the group."

The group's third album is already being praised as the best so far. Said Lamonte, "I think every album shows our personal growth. I think we will continue to be a voice for people who are not traditionally churched and don't want to move from a Chris Brown to a Shirley Caesar track. That's not an easy transition. Our full vision is to make an impact on people and to let them know this whole church thing isn't boring. It can still be fun. That's our mission." 'Winning' features GI's new single "We Win" as well as a cameo appearance from TV One's R&B diva Keke Wyatt. Said Branden, "All the songs have a similar theme as far as the elements we need to win in every aspect of life, whether it be your spiritual life, your job, or in your marriage. The songs all deal with some level of winning." The "We Win" single is described by BlackGospel.com as "a lilting conversation with God that builds into a rousing congregational sing-a-long. In the song the group serenades the listener with testimonies of winning life's battles because of God's able defence."

For more on G.I. visit the G.I. artist profile