Geoff Mann: Remembering the life and times of a rock music original

Paul Keeble offers a myriad of memories about his band-mate and friend, GEOFF MANN

Geoff Mann was only 37 when he died in 1993 yet though he never quite achieved the international stardom his talents deserved such was his creativity that the singer and guitarist still retains thousands of enthusiastic supporters today. The Cheshire-born singer, songwriter and guitarist rose to prominence in the 1980s with mainstream progressive rock band Twelfth Night. Then, after a deep and lasting Christian conversion, he went on to form The Bond and later still A Geoff Mann Band which later became Eh! Geoff Mann Band. In 1992 Geoff was inducted as Vicar at St Luke's, Deeplish in Rochdale. Geoff was in every way a larger than life character. Friend and band member Paul Keeble here gives a potpourri of memories about this fondly remembered musician.

A video recording surfaced recently of Eh! Geoff Mann Band playing at the Marquee Club in London circa 1990. Andy Labrow, then lighting engineer and general factotum, now custodian of such things Mann, posted me a DVD copy. I wondered how he'd done the transfer from black and white silent, but then remembered it wasn't quite that long ago.

To: andy@
Subject: Marquee video
"Hi Andy. Thanks for the DVD. I watched a bit of it today. Thought at first, actually we don't look that different... then I changed the aspect ratio to 4:3 and these thin people appeared. Seems to be fairly typical so far. Song 2 intro halted as John was still changing guitar, Geoff intros wrong song, Geoff starts 'More To This' on the wrong fretboard, refers to Gary's shirt pattern as nosebleed and seagull-dropping. He hasn't got to you or me yet. . ."

It was a single camera job that I don't think we were even aware of at the time, quality a bit grainy, sound as you'd expect from the built-in microphone (now if there was a desk recording of that concert around anywhere. . .), but it brought back good memories.

I first met Geoff in June 1985 after he'd phoned up to book a band I had been in. I say "had" as the band had broken up. Gary the drummer and myself (bass) had been doing bits and pieces of work to keep our hands in, and it turned out Geoff and a guitar player he knew called Dave were also at a loose end. I went over to visit Geoff in Salford and we quickly got into deep conversation. As he handed me a cup of tea while simultaneously delicately kicking a potty into position under his son who he was toilet-training, I thought: "This bloke is a bit special". . . not just due to the potty trick, I hasten to add. We seemed to click straightaway. Several of his works of art were in the room, including Creation Of The Universe According To Crisps and an amazing collage over the fireplace. He told me that day about how he had heard the words "Jesus died for you" in a play on TV he'd been slumped in front of in a not entirely sober state and that had been the beginning of a journey to finding God and losing his job as vocalist with up and coming progrock band Twelfth Night. He thought he'd got a good deal.

When the four of us got together a week or two later to rehearse a few songs for an event I had been asked to find a band for, the clicking turned out to be musical as well, despite as many different as common influences. We worked up a mix of Geoff's and my songs plus added a few improvised in rehearsal, and did the gig as The Earthlings (a name thought up minutes beforehand as the bloke announcing us said he had to call us something). It went well and we ended up playing several more over the course of that summer, but then went into two different bands. I was working for British Youth For Christ at the time and had been asked to put a band together for working in schools and specific projects. Alphabet was to be a full-time outfit with a lot of travelling and just wasn't the right thing for Geoff. He and Dave ended up in a trio called The Bond, but we kept in touch, our friendship grew and our families met up socially. Occasionally we worked together: I would sometimes sound engineer The Bond concerts and helped Geoff with some drum machine programming for the first The Bond album.

During this time Geoff responded to a calling to enter the Anglican ministry and embarked on a training course. I'm not sure either he or the C of E knew what they had let themselves in for. I remember him showing me a note in the margin of one of his essays: "Describing a commentator's work as 'bollocks' is not academically acceptable". Once, when going to an appointment with the bishop, he was warmly welcomed at the door by Mrs Bishop, led through to the kitchen and presented to the gas boiler. She was expecting a repair-man. For some reason something about Geoff's attire and manner had not communicated "Anglican ordinand".

By 1989 Geoff was curate in a church in Bolton, but with permission to maintain his music. Both The Bond and Alphabet had ended, and we found that we were again both available, music-wise. So, again with Gary, and this time with a different guitar player, John, from his church, The Earthlings re-convened, but now known as A Geoff Mann Band. The musical "clicking" of this line-up was, if anything, even more pronounced, and the first full day's rehearsal produced "Obsessed" and "More To This", both of which ended up on the first album.

Rehearsals were usually in the lounge at my church, a room with a nice acoustic, next to a kitchen with kettle, and with a nearby chip shop. Ideal really. First the kettle would go on, then we'd set up. Quite often a jam would start from one of us playing a few chords or notes, or a drum pattern from Gary and the others improvising over it. Sometimes these would fizzle out, sometimes a song idea would emerge, with Geoff providing flow-of-consciousness lyrics. We learned to have a tape machine ready as part of the set-up so that a good idea could be recorded for future use and development.

The contents of the CD compilation 'Hit Me With Your Gibbon Stick' (available from www.geoffmann.co.uk) are taken from those rehearsal tapes at Brunswick Church. John always said he liked the feel of those early versions of the songs as we bashed them out in one go, arranged in a circle and just enjoying playing. We tried to re-create that set up on our second album, 'Ministry Of The Interior', with three of us in a semi-circle facing the window looking into the drum room, amplifiers in other rooms (bass in the toilet!) for separation and sound fed back to speakers - not headphones - in the room we were in. This was how the basic tracks were recorded with vocals and keyboards and any other extra bits overdubbed. 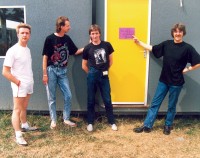 'Gibbon Stick' is a mix of songs from our two albums, sometimes in different arrangements, plus others from the live set such as "Rest Assured", Twelfth Night's "Fact And Fiction" and Geoff's superb version of "Eleanor Rigby". There are also a number of songs in various stages of completion that could have been on our third album. One of them "On The Edge", recorded at the time with Geoff's semi-improvised lyrics, was subsequently finished, and a piece of paper containing the completed lyrics re-surfaced unfortunately just after the insert was printed [copied below].

We began to play various pubs and clubs in the Manchester area, and also some concerts for churches. Over the next nearly four years we ended up in a number of interesting situations, including the Marquee Club, the Wheatsheaf, the Witchwood, a Cathedral somewhere (too much reverb), Greenbelt, the Harry Festival and the first Cross Rhythms Festival. There was also a short tour of Germany and Holland (as immortalised in Geoff's ...the secret (tour) diary of "Eh! Geoff Mann Band" aged 143 (approx)).

Along the way we accumulated a lot of stories and memories, such as:

One night at The Witchwood, Ashton-under-Lyne, right at the front, was a group of Hell's Angels. Partway through the set one of them asked if we did any Howlin' Wolf (the blues artist). We gave a variation of the standard answer, "He doesn't play any of ours, so no, we don't" and continued. A few songs later it was: "Play a blues. In G". This shouted out from quite a small one who seemed to be their leader. As the set went on, this request got repeated several times, always with the key specified, but we managed to ignore it and made it to the last song. The crowd - apart from the Hell's Angels - seemed to like what we'd done and chanted for an encore. When we came back up, the little bloke was on his feet. So were his considerably bigger mates. "PLAY. A. BLUES. IN. G." We decided we would like to see our families again and began to play a 12-bar blues in G (something Geoff had never done before, so John was shouting out the chords). Whereupon the little bloke climbed up on stage, whipped out a harmonica - a G harmonica - and proceeded to play along. He was actually quite good. It got a great reception and afterwards the Hell's Angels were really rather friendly. We were really rather relieved.

Fond memories of Geoff Mann Band playing S. Martin's College in Lancaster in the early 90's. I was one of the Entz Crew who helped the band set up/pack away and somewhere I still have the CD that I bought.... It was a great evening, fondly remembered.

I went along with four friends to see Geoff at the Hull Adelphi. It was a great night, after the gig he came over and sat with us and sang "One of the green things". A very underrated musician and song writer, a positive inspiration during my misspent youth. God bless him

As Geoff's son I feel that I need to pint out that Dad had no leg to stand on when it came to dress sense as he wore paisley clerical shirts! And also that I really enjoyed the article, as Paul is very aware, we love him and his family very much and still enjoy seeing them socially! Oh, and for those wondering, yes, blizzare does indeed run in the family!

i knew Geoff from his Salford days i used to listen two twelfth night in his cellar, and had a good few cups of tea with geoff, he used to lend me his wem copycat hah thanks geoff fantastic guy, miss ya

I first met Geoff in 1977 in Manchester. Paul K, the reviewer, is a very good friend and I love the completeness and detail of his memories and recollections of Geoff. He has captured his 'larger than life' nature. Geoff was one of the very few people I've met who change your life just through the encounter. Paul fails to really highlight his artistic genius; he was perhaps one of the most brilliant fine artists I've had the good fortune to meet. He could paint anything with anything: from oils to acrylics to charcoal to crumpled up paper. A man of pure joy and goodness, overflowing with creativity, and an inclusive sort that drew people into a new world.

Well done Paul. Thanks for the memories.