George Russell: You are what you here

One of the team of seminar speakers at Cross Rhythms '94 is Liverpool lecturer GEORGE RUSSELL. Here he looks at the effect music has on our lives. 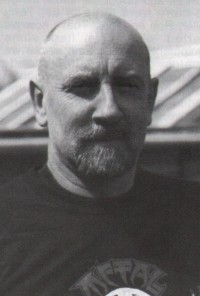 Man is a special creation in an infinite Cosmos. There are biological similarities with other life forms, simply because we are designed to inhabit a global ecosystem based on air and water. This is not a creation/evolution debate; as far as I am concerned as a Christian (34 years) and a research scientist (19 years) of longstanding, there is no doubt whatsoever in my mind that the universe and its inhabitants exist as a result of God's decision to create rather than molecular roulette or blind chance.

However, to fully appreciate the effect of music or any other factor on a human being, we need to appreciate one of many major differences between Man and the animal kingdom. Animals operate on instinct rather than learning. Ants do not attend the local FE College to do BTEC in twig bridge-building. Dogs do not need to be taught how to urinate without warming their feet: but humans do! Animal intelligence is largely transmitted genetically, ie, they are born knowing what to do, although animals "learn" in a limited sense.

Humans are totally different. They are born with virtually "empty" brains and learn as they grow. Human development is usually considered in four aspects; physical, intellectual, emotional and social. From before birth to around four years of age the physical development is monitored, then off to school for specialised intellectual development. Generally the emotional and social development is left to the University Of Life (a euphemism for learning the hard way!) unless the person becomes aggressive, depressed or extremely antisocial. At this point you meet the friendly neighbourhood shrink, probation officer or social worker.

In fact there is another aspect that is largely overlooked; spiritual development. Every human being has unfulfilled spiritual needs that will be realised through religion (including Atheism!) or involvement in the occult, unless the person has a relationship with God through Jesus Christ. The well-balanced person is fully developed physically, intellectually, emotionally, socially and spiritually. Do you know any? I haven't met too many recently!

So here we have a newborn. It possesses inherited personality traits and physical characteristics but is in essence a programmable unit. Like a living computer, the child is programmed by parents, teachers, peer group and most of all by television and the media. The way we learn is similar to the way computers handle information. There is an input stage (learning), processing and storage (thinking and memory) and an output stage (communication). The input to our senses is non-stop, and we have limited control over it.

Each moment of every day we receive information through the senses. Some information is useful; some has no value at all. Within a very short time most of this information is forgotten. Unfortunately, it isn't always the useful information that is remembered. It is a fact that shocking, repetitive, interesting and colourful images are usually retained permanently; you can see all of these used in the music and advertising industry. There is an elite that set the trends in music, cosmetics and fashion and make a lot of money in the process. They may call themselves fashion designers, record promoters or television authorities; in reality they are mind-shapers. They have the power to convince the gullible majority that they lack sex-appeal, personal cleanliness or street credibility then sell their self-respect back to them at a premium. Music plays a major role in this process, so let's look at how music can affect the whole being.

Living Colour wrote a song which begins, "In Africa, music is not so much an art form as a means of communication." This is true in the rest of the world too! All music consists of lyrics, melody and rhythm; sound waves of varying frequencies and amplitudes which have the potential to affect the whole person, body, soul and spirit.

The body is the part of Man designed for the planet we live on. You may have heard the old wives tales about pot plants that assume triffid-proportions on a diet of Beethoven but shrink to a heap of twitching protoplasm after six minutes of Metallica. Prolonged exposure to very loud noise may affect cell structure, but it is the amplitude and frequency of the sound that counts, not the musical form. Rhythm, volume and frequency have all been shown to affect blood-pressure and heart-rate in human volunteers. Head banger's eardrum (known to the medical profession as "Whad'ya say?") is common to metal-heads and classical percussionists alike. Any brain bruising experienced by head bangers is a result of the motion not the music, you get the same effect head banging to Val Doonican or Franz Schubert.

Music has a profound effect on the soul and particularly the emotions. Music has the ability to change the way you feel, a property shared by all drugs and as such is a major tool for mass manipulation by the media. The fashion scene, cosmetics industry and television have turned persuasion into a fine art with music as a major factor in mind-shaping. Look at the ads on television; be it jeans, chewing gum or alcohol, rock music sells! Listen to the bland insipid muzak piped out in restaurants; it helps you relax, cope with the bill and makes any meal seem exciting by comparison. You have to eat to stay awake.

The elements in music with particular effect on the soul are the volume, frequencies and of course the melody and instruments used. There is a thriving industry churning out mood-music for commercials and relaxation tapes. Pass your A-levels with the sound of whale song or gentle rain trickling through the pines: there may be side effects, however. The trickling rain is more likely to autosuggest a visit to the bathroom than help you to chill out.

The appeal of music to the emotions is also used in the church. The damp dry-rot-scented atmosphere of old churches can be given a real Gothic Horror quality by employing a pipe organ. Guaranteed to give anyone a craving for wooden crosses or garlic flowers.

At the other end of the scale, there is the "celebration" with full rock band and professional "catchers". Let's be honest, many people like "praise and worship" because it makes them "feel good". Certain musical forms will always make you feel good. Why do you think some churches have music playing when an appeal for hard cash or response to a message is required? God is interested in reality not manufactured emotion; worship is a spiritual exercise. We must stop assessing meetings by how good we feel and ask the question "What did God make of it?"

So music influences the body and soul, but what about the spirit? The importance of the words we use is emphasised throughout Scripture. Words can have a creative or destructive effect on others. Words spoken reflect the state of our hearts and we are accountable to God for everything we say. Jesus revealed that his words were not just vibrations in the air, but were spirit and life. I believe that song lyrics, like any other spoken words, have the potential to go beyond our emotions and affect our spirits. Music can have a beneficial or harmful effect on the listener in the same way that the literature you read or videos you watch do.

Fear of the effect of music has led to the polarisation of so called "good" and "evil" music styles. Many authors have made a great deal of money and caused a great deal of confusion by promoting this view. They teach that "good music" is quiet, non-disturbing and safe: "bad music" is popular, loud and dangerous. The truth is that music is neutral, like television or books; what makes it good or evil is what is communicated.