The only act ever to have played every Cross Rhythms Festival, heavy rock pioneers GETHSEMANE ROSE have had to tough it out through all manner of disappointments. But with a new album out any day and support from overseas, things are looking up. They spoke to Simon Calvert. 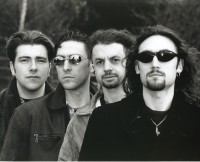 The four nice lads are Ben Mears (27), Andy Mears (29), Steve Russell (23) and Matt Cooper (a bairn at only 20!), collectively known as Gethsemane Rose. The message is the Gospel and the medium is their new, description-defying brand of heavy rock.

UK CCM's first real taste of Geth Rose was in 1993 with the Kingsway/White Metal release of their album 'Tattered 'n' Torn'. Produced by Paul Hodson (later to form Nu Life Records to whom the band are now signed) and at the time under the management of the hardworking Dave Williams (responsible for Seventh Angel and now the Meltdown conferences), the album was well received.

Turned out 'on a vibe' according to Andy, it expressed where they were at the time with its solid Guns 'n' Roses style rock and roll. (You can hear two tracks from the album on the CR Experience Volume 6, Issue 23 of the mag) Along with a busy touring schedule, 'Tattered 'n' Torn' helped to establish them as one of UK CCM's most respected heavy rock outfits.

Highlights for the band include playing at Greenbelt '93 and main staging at the MAYC London Conference in 1995 where, in three gigs, they played to around 12,000 kids. The band has also enjoyed good exposure at Meltdown, Soul Survivor and, of course, their regular spot at the Cross Rhythms Festival.

But now, in a new departure described by drummer Steve as "a world away" from Tattered 'n' Tom' comes the new album 'Poetranium'. Produced on the Nu Life label, it should be hitting the racks about now.

A not unfamiliar story is that this album has been in the pipeline for a year now (a very long pipeline!) and the band are frustrated at the wait. Recording was finished and release expected over a year ago. And it's not only the band who are frustrated. "When we play people are coming up to us all the time asking, 'When is the next album coming out?' We keep having to say, 'Oh, er, soon.'" Ben continues, "It's hard to say it but, there aren't many Christian rock bands at the heavier end of the market that people have heard of. We're one of them and yet we're struggling to get this album out. It's a bit sad."

Steve picks up on this: "The potential for Christian rock is massive. There are thousands of Christians into rock, but we have to compete with the secular bands. If our album comes out at the same time as a Metallica album, the Christians will go and buy Metallica's instead. There is less hard-core loyalty amongst Christian rock fans than amongst fans of Christian dance or folk. It seems we are climbing up a steeper hill." Matt continues, "Also, there's not the garage scene like there is in the US. In the UK, when it comes to rock, you're either Metallica or Bon Jovi or you're no-one." The success of US Christian rock bands is cited in terms of names like Bride, Tourniquet, Johnny Q Public, Guardian and Nouveaux. "Over here there are some good bands like Abednigo, Third Day (the Welsh ones!) and River - all heavy - all unsigned."

"What the Church needs to see," says Steve, "is that the only way of reaching people who are into rock is through the music. The Church has to really support bands playing to them - it might be the only way some of them will ever get saved."

I ask what form this support needs to take. "We need prayer support," is Steve's sincere reply. "Money would be nice (!) but it is prayer that can make what we do into an effective Christian witness."

The entire band attends Welton Evangelical Baptist Church in Midsomer Norton near Bath. They speak well of the teaching, worship and friendship there and especially of the support given by the young people. However, there is no official support network as such behind Gethsemane Rose and the need for that is keenly felt. This is more so when the 'hard times' come. Says Matt: "You get the impression sometimes that some people think, 'Why bother with that heavy metal rock band stuff when you could be leading worship?' (The band have had successful forays into the realms of worship leading, successful due simply to the fact that "we're four half decent musicians!") All four agree that there have been times when they would have packed in the band if it wasn't for the belief that Gethsemane Rose is what God wants them to be doing. Andy: "We do good gigs for Christian folk to invite their friends to. I did a local gig recently and invited some friends from work. It resulted in mega conversations about God, the universe, creation, etc! And we get letters from people. There was one recently and it said, 'Thanks for the gig the other day. I haven't been to church for months. A mate persuaded me to come to your gig and now I've recommitted my life to God.' That makes it all worthwhile."

We return to the new album, 'Poetranium' (a name which is entirely the invention of Geth Rose, meaning "the art of making music like we do with lyrics in today's language"!). The 'world away' departure must be due in part to a revised line-up. Ben (vocals/guitar) and Andy (guitar) have been there from the beginning, Ben roping Andy into a band he formed shortly after leaving college. This band transmogrified into Geth Rose some five years ago. Steve (drums) became involved three years ago when the band were looking for a new drummer (a referral through Tony Cummings - that man gets everywhere!).

Matt (bass) joined Welton Evangelical Baptist Church two years ago and it was Ben who invited him to join after working with him in the worship group. "I had been in a non-Christian band and God told me to leave. I had been praying, 'God, I really want to play in a band,' and then Ben asked me to join Gethsemane Rose." Ben is cited by brother Andy as the driving force behind the band. "He had always been in a band of one sort or another ever since he learned to play guitar when he was 11."

Anyone who has heard them play recently will know that Geth Rose have been experimenting with the addition of a percussion player and this has apparently worked well. However, there are no plans for a fifth member of the band.
It is Steve (again! Talkative lad!) who leads off with a description of the new sound. '"Poetranium' is more groove-based than the last album. There's more feel to it and it's more up-to-date with musical trends. It's complex too. 'Tattered 'n' Torn' seems simple now in comparison." Then suddenly, without warning, a clanging (though sincere) musical cliche: "We've grown musically!" (There is a pause for embarrassed titters.)

Matt chips in, "As a new comer, I'd say it doesn't sound like anyone else at all. You can't say, 'It sounds like such and such.'" They cite influences like The Electric Boys, The Black Crowes, Aerosmith, Skunk Anansie, The Red Hot Chili Peppers and Pearl Jam, "And all that sort of stuff generally." But this album is original. "And that's a definite plus," concludes Matt.

As we draw our chat to a close, the lads tell me their plans for the weekend. Not the two days shopping and lounging most of us might be looking forward to. Instead, a journey to Plymouth where they will run a music workshop on Saturday, then do a full gig in the evening, then a praise party on Sunday morning, all care of a Plymouth youth organisation called Spearhead. They work hard do Gethsemane Rose. They're nice lads. And they can communicate Christ to people, some of whom, with the best will in the world, no MOR, pop or dance outfit could hope to reach. Like a lost tribe there are thousands of people in the UK whose only language is heavy rock. And like any pith-helmeted missionary, Gethsemane Rose needs our prayers, our money and our loyalty if they are to reach them.