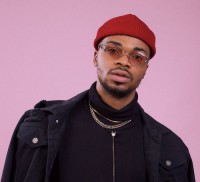 If you've yet to catch up on the exciting sounds of Afrobeat, you're in for a treat when you hear the music of Nigeria's most popular gospel Afrobeat artist, Gil Joe, whose "Issa No", "Nobody" and "Need Somebodi" are now getting some xRhythms radio play. Afrobeat is a fusion of West African musical styles such as fuji music and highlife music with American funk, hip-hop and jazz influences. Alongside the mainstream's Afrobeat pioneers such as Fela Kuti, Manu Dibango and Sonny Okosun, Gil Joe, with a string of successful recordings in his Nigerian homeland, has brought the Gospel message to the genre. Cross Rhythms spoke to Gil about his years in pioneering gospel Afrobeat.

Tony: How long have you been making music?

Tony: Did you start off making music as a solo?

Gil: "I've always been a solo but music wasn't really always my first design. I really thought I was going to be a music producer because I started off with music producers, I was learning sound engineering alongside music production. There's a gospel artist from Nigeria called Frank Edwards, he listened to me and he loved the sound and then he sort of encouraged me to join his group at that time so I was riding on his platform for a while. I've been doing my own thing for three years."

Tony: Has the church in Nigeria accepted your sound?

Gil: "Churches here encourage the more traditional gospel sound but the afrogospel/urban sound is considered too secular, even when the message is still Gospel. I think they have a problem with the beat. We try to let them know the beat has nothing to do with the content and, over the years, some churches have opened their doors to us."

Tony: What about non-Christian audiences?

Gil: "Basically, non-Christians just want to vibe to good music, regardless of the content. A vast number of them have been supporting my music for a while. A lot of them ring me up telling me how they're listening to my music and it's changing their lives and how they got to know Jesus through my music. I believe that is because the sound is something they could identify with and it's not like the typical gospel sound. They start listening to the vibe because of the sound basically then they get to hear the content and they are blessed by the content."

Tony: You live in Lagos but I understand you'll be travelling to the USA in November. Any chance of a UK visit?

Gil: "I'm planning on putting in an application for a UK visa so I can come over to Britain. When I first started, London was the first city that showed some massive support. London came up on my YouTube then Paris came on board, as well as cities in the USA."

Tony: Tell me about the song "Need Somebodi", which we're playing on the radio.

Gil: "It was produced by one of my friends. He made the beat and then I heard it and I said, 'I love this beat; let me drop on it' and the recording sounded really nice."

Tony: You've got an EP out called '#AfroGospelToTheWorld'. Is "Need Somebodi" on there?