Gilbert Mulamba: The Congolese musician who records with US luminaries 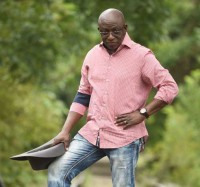 Last October saw the release of the long-awaited second album from Congo-born, Dallas-based pianist, arranger and producer Gilbert Mulamba. The release's inlay card describes the project as "a mosaic of cultures, sounds and grooves for the ultimate worship experience" and, with recording having taken place in the US, Congo, France, South Africa, Mexico, Haiti, Israel, China and as many more countries, it's a truly international affair. Impressively, Gilbert secured cameos from big name artists such as Joel Kibble of Take 6 fame and Grammy-winning saxophonist Eric Marienthal whilst Dove-nominated pianist Ben Tankard and CeCe Winans' bass player Thaddaeus Tribbett also lent their substantial talents - all of which adds to the rich tapestry of sound contained within the album's 13 mostly instrumental tracks.

Whilst 'Forward Journey' is sumptuous in nature and sound, Gilbert was introduced to the world of music in much more humble circumstances. At the age of nine, he began playing on an old piano his father had purchased from an American missionary who was retiring from his post in Gilbert's native Congo whilst the budding musician also started learning to play the guitar by building an instrument out of motorbike and bicycle brake cables. Before long, the young Mulamba joined a band made up of American embassy workers - often walking miles to rehearse due to not having a keyboard of his own. Having made enough money with the band to buy his own equipment, Gilbert then went on to record instrumental Christian music whilst subsequently playing on other artists' albums.

Having achieved a degree in biology, Gilbert moved from Congo to Pennsylvania in 1989 to start his masters and, whilst music wasn't the prime reason for his going Stateside, he would find himself playing bass in various gospel groups on the university campus.

I catch up with Gilbert on a long distance call to Dallas and, despite the crackly line, his enthusiasm for life, music and the new album is evident from the word go. "I am very happy with the album," he advises in a soft African/Texan blend of an accent before adding a caveat. "But there's always more you can do. As I was working on it, my wife suggested that it was already done but I kept telling her that I needed to do this and fix that. Not that I'm a perfectionist but there's always something to add or correct."

I ask Gilbert what he was setting out to achieve with 'Forward Journey'. "My aim has always been to make music that will help people to meditate, worship or just create an environment to remind them of the greatness of God. Because I can't sing - I'm not a good singer and that's why I do things instrumentally - I have to make music in such a way that it's beautiful to listen to and, at the same, elevate the name of God."

At the last count, recording for the new album took place in no less than 26 countries and it appears that Gilbert has always viewed music through an international lens. "When I was growing up, I was always listening to music from every corner of the globe," he recalls. "I grew up listening to music from the Caribbean, classical music, music from South Africa - from everywhere, basically. Music has no frontiers and my aim has always been to blend different genres, styles and sounds - and even instruments from different cultures. I had to do a lot of recording separately in different parts of the world. Putting everything together was a challenge and it took me some time but it was worth it in the long run."

As well as reflecting a vast array of music from different countries, referencing his African roots remains a key consideration for Gilbert. "It was very important for me to reference my roots," he confirms. "Sometimes I feel that, in the church, African songs and hymns are not really featured and they haven't become part of the global church repertoire. It's only recently that some songs from South Africa or perhaps Nigeria are being sung worldwide. It was very important for me to have some African participation on this album."

With a raft of top notch musicians guesting on 'Forward Journey' I wonder how it felt having some fairly heavyweight collaborators on his album. "I'd been listening to music by some of the musicians who ended up appearing on the album," explains Gilbert. "I admired their work and artistry as well as the quality of the songs that they put out. To be able to collaborate with them was just a privilege. Here is this boy who came from Africa trying to enlist big names to play on his project and it was such a great opportunity."

I ask Gilbert, having certainly come a long way in the intervening years, to cast his mind back to where it all began musically for him. "My father went to school in Belgium and returned to the Democratic Republic of Congo to finish his college education," he recalls. "Around that time, the part of Congo where we had moved to had just come out of civil war and rebellion so some American missionaries were in the area. Across from our home was an American paediatrician and every evening I would hear music coming out of his house. I was about nine at the time and I would go and hide in the flowerbed by the window and listen to him playing the piano until one day he noticed me and told me to come inside his house. I went inside and he let me tap on the piano keys and then after a while he noticed that, without anyone showing me what to do or how to play, I was picking up songs and playing them by myself. Right around that time, he was retiring and returning to the US and he asked my dad if he wanted to buy the piano for me. My dad bought it for $100 and that's how it all started."

Continues Gilbert, "I took lessons - my dad hired a private music teacher who would come to our home to teach me. He was the one that taught me how to read classical music but, after a while, my mind was on other styles of playing. I wanted to play freely and turned more to jazz and blues."

To further fuel his interest in music, Gilbert built a guitar using motorbike and bicycle brake cables for strings. With this in mind, I suggest it must have been a challenge to even obtain an instrument to learn on. "It was a struggle in the sense that there was a lack of material equipment in the area where I grew up," he agrees. "In our neighbourhood, the piano was considered to be an instrument only for the elite and so not many people had them. In terms of synthesisers, keyboards and guitars, we had to be creative and either build them ourselves or find people who had them and rehearse where they were."

With the necessary equipment at hand, Gilbert started playing with a group of US embassy workers. "I can't remember how I got to play with them but we used to perform every weekend," he advises. "There was a private family club where people would come and have barbeques and we would play at that or whenever the ambassador had a ball or reception. With that, I learnt to play country, oldies, American pop music and such like and, whenever I hear those songs on the radio now, I know that I've played them all!"

I wonder how a boy from Central Africa ended up in America and if music had anything to do with his relocation. "Well, I had a degree in biology from the university I attended in Congo," he begins. "I came over the US to do my masters and I went to school in Pennsylvania. Music certainly opened the door for me to get my visa but I came here for education primarily. However, I was still playing and I was part of various gospel bands on the campus where I was studying but as bass player - not a pianist."

Keeping his hand in musically resulted in the release of Gilbert's first album, the jazz-tinged instrumental set 'Trustin' Him' in 2004. He explains the connection between that and 'Forward Journey'. "For 'Forward Journey', I've kind of stayed fairly close to the style of the first album. A lot of people who have listened to my music over the years have complained that I took so long to release the second album. Most of them are now saying they hope I don't take 14 years to do the next one! I'm already working on music that has a meditative feel with just piano and guitar and that might be what the next album will be like."

Whilst 'Forward Journey' contains some fairly well known worship songs like Chris Tomlin's "How Great Is Our God" and Tim Hughes' "Here I Am To Worship", Gilbert's versions are more like variations on a theme allowing each song to journey in an unexpected and experimental direction. "It just happened but it's what I heard in my head and what I wanted to deliver. Those songs are worship classics in their own right but I wanted to reintroduce them to the world with a different flavour."

As we near the end of our chat, I ask Gilbert what keeps him going. "As long as I have breath, I need to keep praising the Lord," he says without hesitation. "I was reminded of that very recently. My wife had a friend who had lung problems and she would walk around with a tank of oxygen and tubes connected to her but she was always happy and smiling. She even came to my daughter's graduation and was on the dancefloor with her tank, dancing away. Sadly, she passed away a year ago and, every time I see the word 'breath' in the Bible, I remember her. Because she had a hard time breathing, every breath she took was to praise God, be happy and impact people by the way she lived her life. For me, as long as I have breath, I'll praise the Lord too and keep doing what I do."

I know Gilbert very well. He was one of our churchâs pianist and I start my own worship ministry in that church with he as the pianist. When I travelled to Boston, MA, USA in 1995, we gave me an instrumental which has never been released but is such a blessing to me. I am eager to listen to his new albums that I have never listened to. I am proud of this guy, he is really gifted.

Thanks to you Lins for the chat and capturing the essence of my music so well. I appreciate you.