The latest addition to N-Soul's growing roster is 19-year-old GINA. Yet Gina is no newcomer to the music world as Tony Cummings found out. 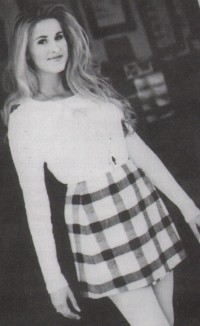 With the release of 'Eternity' Scott Blackwell's N-Soul Records have introduced to the sanctified dance world a 19-year-old blonde called Gina. Maybe "introduced" is the wrong word. Previously Gina Foglio (pronounced Folio) had sung two of the best cuts, "High Places" and "More Precious Than Silver", on the best selling and pioneering dance praise album 'Nitro Praise'. And previous to that the so-talented singer, now living in Marina Valley, California, managed to clock up three albums. Not that Gina's earlier work was anything like the slick pop dance that makes 'Eternity' such an outstanding release.

"I began singing in church in my home. My grandfather Frank Foglio was a founder of the Full Gospel Businessmen's Association and wrote a best selling book Hey God. When I was young I used to drive my folks crazy singing the songs from Annie - I had an Annie dress and a red wig!"

At age 10 Gina made her first venture into recording, making a private tape 'People Need The Lord'. "Actually, it was recorded in Michael Sweet's garage!" giggles Gina. "What happened was that I was heard by Brent Jeffers who was the soundman with Stryper - he also occasionally played keyboards with them - and he produced the album for me."

Was there any contact with the heavy metal superstars I asked? "Well, we used one of Michael's socks over the mike!" responded Gina.

The pop gospel protÃ©gÃ© was popular around the Californian church circuit and Gina recorded further tapes, 'To Find True Love' at age 12 and 'Heart Sacrifice And Desire' at 15. The singer's move into the dance arena came when she was asked to sing at famed Christian nightclub The Flipside. Hearing her sing her usual ballads and worship songs was the deejay for the night, one Scott Blackwell. Remembers Gina, "Scott heard me and really liked my voice. The next thing I knew he was asking me to sing on the 'Nitro Praise' album. I have to admit that until meeting Scott I'd never heard any Christian dance music, I never knew there was such a thing. But as soon as I heard it I loved it. It was what the teenagers were into and it dawned on me pretty quickly that Scott was a genius!"

The release of the 'Nitro Praise' with its house versions of popular worship choruses went on to become N-Soul's biggest selling album, making the national Christian music charts and it was only a matter of time before Gina was asked to record a full album by mix master Blackwell.

Gina's favourite song on her N-Soul album is the title track. "I think the message of "Eternity" is really awesome - how people get so caught up with things like money, designer clothes, cars and miss the greatest thing of all, an eternal relationship with our Lord Jesus Christ. Another of my favourites is "Tell 'Em". You know, we Christians could make such a difference if we could tell people about Jesus. There're so many people out there who haven't heard the good news."

Despite the fact that America's conservative Christian radio is resistant to dance music 'Eternity' is already getting radio play. But it's Gina's live gigs and club spots - with a chance to meet her audience and talk about Christ - which are most important to her. "We played the Rocket Town which is a dance club in Nashville owned by Michael W Smith. There were so many young people passionate about Jesus. It was so uplifting. Another gig I've done recently was an event called 'Somebody Loves You'. I played that along with Jon Gibson and Hymn Jim. It was a great event and at the altar call several hundred people came forward."

Gina, who married one Brian Walden in January (Brian teaches physical education and runs a Christian karate school - only in America, folks), wants to "go wherever God wants me to go, singing and telling people about Jesus." A final comment from Gina: "I'm already getting letters from teenagers telling me that they've really been helped by songs on the album. That means more to me than anything. There are those involved in music ministry and those involved in the music industry. I'm definitely in ministry. I want to help build the Kingdom Of God."

This is so great. Thank God for people like you who are ready to live for God. Your grandfather will be so proud of you

For more on Gina visit the Gina artist profile