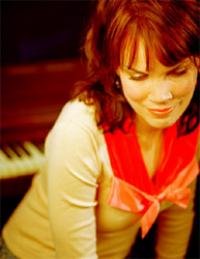 With her delicate voice and jazz-tinged piano America's Ginny Owens has often been compared to mainstream acts like Sarah MacLachlan and Fiona Apple. But now the singer/songwriter's music is taking in unexpected new musical elements - namely R&B and the blues. She admits, "I'm trying to sneak as many elements of that into my songs as I can. I'm not sure how much we will sneak onto the next record but I'm pretty sure it will be a good bit. I think every record will be a little bit more than the one before." Owens says as a child growing up in Jackson, Mississippi she listened to a steady diet of R&B music. The blues flavour to her music is particularly noticeable on the songs "Won't That Be Fine", "New Song" and "Bread" featured on her 2004 album 'Beautiful'.

On her new CD, 'Live From New Orleans', which was recently released in the UK by Fierce! Distribution, the blues are front and centre. It was recorded live at the legendary House Of Blues in New Orleans. On the project the singer even does a cover of the Lenny Kravitz song "Let Love Rule". Ginny once again worked with longtime friend and producer Monroe Jones who has been with her since the days she cut her first demo CD for promotion to record labels. Owens attributes a lot of her success to the approach Jones takes; "He is so driven by what an artist wants to do." She says one of the things that makes him so easy to work with is that he "checks his ego at the door. Monroe is one of my favorite people on the whole planet."

'Live From New Orleans' is a CD that was sandwiched in between tours during 2004. Ginny says it was something that had been talked about for a long time and then it just came together. She said the project was purposely kept low key and low budget. They didn't want to attract a lot of attention. Owens says it was also a good time to work on the project because the band and she had already performed in about 100 shows that year so working together to produce the CD came naturally. She refers to it as "a really fun experience."

Owens reflected upon the differences between how she approached her music in the early days of her career and how she feels about it today. "I didn't love music then. I liked it and it was kind of fun. I kept going, 'How did this happen, how did I get here?' The fun part is as I've grown up and got older I've grown to love music more. I've grown to have more of a passion for what I get to do and I've grown to realise a little bit more maybe the significance of the opportunity that I've been given to perform and to write. There are a lot more days now when I wake up and go, 'Gosh, I have the greatest job in the world,' whereas the first few years I was in a haze, kind of a dream world." Now she acknowledges how grateful she is for the opportunity she has, "It's really neat to have come full circle and beyond and go, 'This is such a great and fun job and I'm so excited that I get to do it,' and I have a thousand times more passion now than I did then. It's just really neat to think that."

Owens is still amazed when people tell her how a song has affected them because she says that her songs are born out of personal experience and is still surprised to learn that other people share the same struggles and have felt the same way concerning those situations. "I have begun to learn that there is immense power in a song and so I don't take that lightly. Now I just realise that God has allowed me to have this gift and this job for the time being and so my job at the moment is to write songs from my own personal experiences which might be able to touch other people."

She says it is in the process of her songwriting that she grows and draws closer to God. In her childhood years songwriting was a way for her to heal from the many hurts in her life whether they were dealing with her blindness or parents' divorce or just the everyday challenges that children face. As she got older she said her writing became her way of journaling and then added mischievously that some of those thoughts may even have contained lyrics about cute boys. "It definitely was my way of releasing stress or just releasing creative energy and kind of escaping from stuff and moving on."

When you talk to Ginny Owens you realise she is passionate about her music, grateful for the opportunity she has and often underestimates the impact she has on people's lives. Although no longer introverted she still has an ongoing struggle with shyness and the challenges that poses for her as a performer. Most of all you come to realise that she doesn't sit down to write a song thinking about how it is going to appeal to all the commercial standards of the contemporary Christian music scene but she approaches her music as a craft. Ginny Owens puts the art back in the word artist.