One of the most thought provoking figures in Christian music, GLENN KAISER, has a Best Of blues album just released. Tony Cummings shot him some questions. 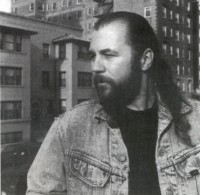 Tony: The last time you spoke to Cross Rhythms was about a year before the release of lament' (1995). Since then there's only been one Resurrection Band album ('Ampendectomy',1998). It seems the Resurrection Band have gone into semi-retirement. Is that so?
Glenn: "It is so. John (drums) is one of the JPUSA pastor's team and has recently been given Cornerstone Festival director's responsibilities... that's a full time job in itself! Wendi (my wife, and vocalist) is booking myself, the Glenn Kaiser Band and she is also doing seminars on dating, sexuality and relationships and is doing fairly well but is not in the best health. Stu (lead guitar) and his wife have been doing GodZone (jazz/rock/fusion, etc) and a gospel choir from time to time, and Roy (bassist) is doing the Glenn Kaiser Blues Band with me as well as other projects with musos in JPUSA. All have kids, all have other ministry responsibilities in the community here, and it has become a matter of stewardship of everyone's life and time, as well as a matter of encouraging and helping some of the other younger musicians to step up and serve. Will we tour again, or record again? God knows. We just pray and take it one day at a time."

Tony: 'Ampendectomy' was, of course, an acoustic orientated album. It seemed to confuse some Rez Band fans. Do you think it was a mistake?
Glenn: "Ha. I don't think so at all. We resisted doing an acoustic-based recording for years for a number of reasons - though folks asked for one quite often. It seemed a good and different thing to do, we prayed, believed it to be the Lord's leading, and did it. Truth is, we've heard a lot of positive feedback and very little negative regarding that project. But as in all things, we never expected it to be everyone's cup of tea!"

Tony: We've heard a bit about your church Jesus People USA and how you live in community and have a large number of initiatives out into the community. Can you run through those for our readers?
Glenn: "The quick and most thorough answer is for people to log onto www.jpusa.org on the Web. In essence, about 400 adults and 200 or so kids live in the inner city of Chicago, most with a deep conviction of call to serve. We pool finances, pain, joy, and life in order to do so, and it's Heaven to some, Hell to others and a bit of both to me! We look to the Book Of Acts as the template (if there is one), but we do NOT believe God has called all believers to live as we do, and consider ourselves one expression of what the Holy Spirit is doing in the Church today.

"Some of the ministries: Cornerstone Festival, Cornerstone Magazine, a zillion web pages (via www.jpusa.org site), church service, cell groups, adult biblical education, low-income senior citizens housing (85-90 live on the top three floors of our huge old hotel which is our main building), a shelter for homeless women and kids (65 or so beds), second-stage safehouse and career scheme for these ladies upon completion of our programme at the shelter), youth group and individual short term mission experience options (a LOT of folks from around the world come and work for various periods of time), Grrr Records, Tone Zone Recording... the list is really long. It's been nearly 30 years of community living.

"We do not have private ownership of cars, share food, housing, etc, live fairly basic lives, and do a lot of outreach in the street and to local African-American kids, etc, etc. JPUSA has a pastoral team of eight, a lot of other leaders throughout the community, and are a part of the Evangelical Covenant denomination, which we joined about 11 years ago. We mostly use social medicine services here in Chicago (as do the poor in our neighbourhood), and are perhaps an example of what a bunch of messed up nobodies can do when they commit to loving and obeying Jesus to accent caring for him and others in an inner city, ghetto context. We're multi-racial, ethnic, cultural, tribal. We have really strong and mature, committed disciples and messed up, painful-to-live-with younger and older people. Most are believers, some are truly not... yet!"

Tony: If somebody came up to you and asked you what you did for a living, what would be the first word to come to mind? Musician? Pastor? Writer?
Glenn: "I follow Jesus for a living... literally. I mean, he's the Provider. It depends on the context in which I'm asked. On a customs and immigration form when I'm travelling overseas I normally write pastor/musician in the appropriate box. I'm a, grateful mess who belongs to Jesus by God's grace."

Tony: Do you still listen to music? What was the last album you listened to?
Glenn: "Yes, from time to time. Hmmm, it would be the newest CD from one of the JPUSA bands, Scientific. They're sort of an artful, old school, new wave group with a lot of fresh sensibilities...hard to express the sound. Very cool in my opinion."

Tony: On 'Time Will Tell' there was a song "Deliver" which was pretty critical about the Church. Why the criticism?
Glenn: "Christians often pay other Christians to do the real job of bringing practical deliverance to people still imprisoned on a number of levels. Or we are apathetic to needs - I mean right in our own backyard or church. Too much talk without corresponding sacrificial action. Who could disagree with such an observation? I'm simply stating fact and hoping to encourage some people up and out of their lounge chairs."