Global March For Jesus: Marching To Change The World

As GLOBAL MARCH FOR JESUS prepares for a climactic worldwide celebration of Jesus, Lins Honeyman looks into the march For Jesus phenomenon. 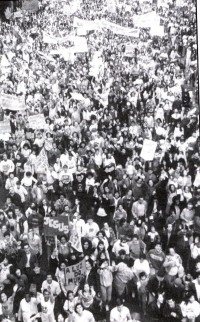 Marching to change the World

On what has been coined Jesus Day, on 10th June the world will witness the biggest ever proclamation of Christ by millions of believers on the streets of 150 nations. Songs will be sung, banners will be lifted high and there will be much rejoicing, weeping and a fair share of sore feet. As March For Jesus co-founder and worship leader Graham Kendrick states "Jesus Day sets the stage for Christians of all persuasions to let the world know the truth some have tried to ignore - the year 2000 is all about Jesus."

The vastness of what has become Global March For Jesus is a far cry from where it all began. Founded in 1987 by Gerald Coates of the Pioneer church network, Roger Forster from Ichthus Christian Fellowship, pioneering British worship leader Graham Kendrick and Youth With A Mission director Lynn Green as a call for people to pray for one day in the city of London, it attracted 15,000 Christians from many denominations despite the incessant rain. "We found that by being together we inspired and stimulated each other," explains Roger Forster, "and being out where the world was inspired us in praying for people and things that were going on as we marched past." With this in mind, the founders called another march in London the following year and, using the name March For Jesus for the first time, 45,000 gathered to pray and praise Jesus on the streets of the capital.

Hundreds of small street marches soon began to take place throughout Britain, before spreading across Europe and America and finally culminating in the first Global March For Jesus in 1994. Since then, over 40,000 people have participated in marches throughout 170 different countries.

It is evident from these figures alone that March For Jesus has been one of the most significant factors in uniting and strengthening the church, along with proclaiming the gospel to every tribe and nation. In just over a decade of marching, praising and prayer walking, the March For Jesus team have seen the marches develop beyond their wildest imagination and have experienced God using them in ways that were never thought possible. From a wet grey day in London in 1987 have come three million people marching in the sunshine of Brazil. From a group of 15,000 people struggling to be noticed in a hustling city has emerged a crowd of one million in Sao Paulo where the march day has had so much impact it is now declared as a public holiday.

However, it hasn't all been on such a gargantuan scale. Countries where the open proclamation of Christ is strictly prohibited have seen tiny groups of believers quietly walking around villages, towns and cities praying and interceding for their fellow country-people and governments. Just a glance through the Global March Reports published by the team shows the struggles and triumphs of believers from many different countries as they proclaim Jesus on their streets. Guinea, for example, saw political resistance broken down by prayer whilst others simply have held quiet prayer walks or prayer meetings.

All in all, unity has been a key factor in the history of March For Jesus, linking Christians together despite the denominational divide. "It has always been a grassroots movement of the people," declares Graham Kendrick. "We have long believed that God is uniquely preparing March For Jesus to build a global celebration of Jesus in the year 2000. That is our hope and dream for Jesus Day."

So what does Jesus Day involve? "The simple message of Jesus Day is that he is worth it. We believe that Jesus is the supreme figure in history," explains YWAM's Lynn Green. "It is a day for Christians, from all walks of life and from across the world, to say what Jesus means to them as the turn of the millennium compels society to reflect on the past and consider the future."

"Many Christians have grieved over the paganising of Christ's bi-millennial celebration," echoes Graham Kendrick, "but if those who love him do not come out into the open and testify that he is alive and is transforming our lives, how can we expect the world to do it for us?"

It has, however, been argued that the importance and value of the marches has evaporated with time, and that the sight of thousands of banner-waving Christians marching through your city may appear to be a tad triumphalistic to the watching world! Graham Kendrick disagrees: "Through marching on the streets, the Lord receives worship. Isn't this of great value in towns and cities where he is not normally honoured and where useless things are worshipped instead? There can't be any higher purpose for us on earth than to bring pleasure to God who created us and gave his son as a ransom for us."

"As for triumphalism - when we march and celebrate Jesus, we may also weep, repent and publicly humble ourselves. We remember that Jesus triumphed through humility, servanthood and suffering."

As 20 million marchers prepare to take their stand in over 150 nations on 10 June 2000, Jesus Day promises to be the largest millennium celebration by far in the Christian world. Britain itself will see Cardiff, Belfast, Edinburgh, Liverpool and London take centre-stage in the proceedings. "Jesus Day is all about bringing the focus back to Jesus," explains Roger Forster. "What better way than to celebrate him in the centres of our main cities, the hub of our country, the places where our society and culture are formed, where people travel, shop, work and carry out their daily lives."

Aside from the obvious marching, the Jesus Day agenda includes a variety of features, designed to make the event as colourful, meaningful and poignant as possible.

For the main part of its history, March For Jesus has involved believers actively prayer walking as they marched. As co-author of A Guide To Prayer Walking, Graham Kendrick is convinced of the importance of this complementary activity: "The whole idea of prayer walking sprang up alongside the March For Jesus concept and started with a crazy idea of walking from John O' Groats to Lands End, and that really set the ball rolling."

"It was basically an answer to a question I had to ask myself: even if we were having a great time in our churches, how was anything we were doing having an impact on the outside world? It was all confined within walls - so we took the walls off the church." Mirrored in Kendrick's 1997 release 'No More Walls', this aim of revealing the church's identity has been constant throughout.

Why, when millions of LGBs march all over the world, can't Christians do it again for Jesus?