Goodboys: The Hillsong Church UK trio with the "Piece Of Your Heart" mega hit 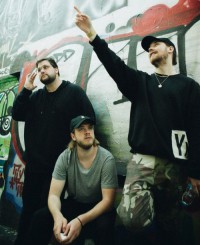 One of the biggest dance music songs for years landed in clubland and on radio this summer when Meduza's "Piece Of Your Heart (ftg Goodboys)" swept all before it, becoming a top 10 hit in Italy (Meduza are an Italian production team consisting of Luca de Gregorio, Mattia Vitale and Simone Giani), Austria, Denmark, Germany, Ireland, Norway, Poland, Sweden, Australia, New Zealand and Britain (where it made number two in the charts). It's the vocal hook sung by Goodboys - Josh Grimmett, Ethan Shore and Johannes Shore - which made "Piece Of Your Heart" such a memorable hit. All three members of Goodboys worship at Hillsong Church, London and on the church website they explained how they sent demos of some songs to Meduza and, six months later, were told that the production team were flying over to London from Italy.

As Josh explained, "They said, 'Hey, we should hook up and write some songs together.' It was super random, but that's how it all began. In one of the sessions with Meduza, they had an idea for a house track, and then within about 10-15 minutes, after having some fun with it, we came up with the line 'Just give me a piece of your heart.' The take you hear on the track of me saying, 'What? Sorry, just quickly. What if it's da, da, da, da' is an actual recording of me speaking in the studio. I had no idea about it, but when it came to the end of the week, Meduza had a meeting with their record label and they played them all the songs they'd been working on from their other projects. Almost by accident, they said, 'We actually have this song, it's super random, and I'm not sure what you'll think about it.' They played it and everyone in the room went crazy for it. 'This is the one!' they said, and it all went from there."

Josh explained their Goodboys moniker. "The name is quite tongue-in-cheek really. A lot of music out there today tries to promote a bad way of living - being a 'bad boy', you know, but we've subverted it and called ourselves 'Goodboys'."

Songwriting for Goodboys is hardly something new. Explained Johannes, "We've been writing songs for around six years and started out by writing songs for church. This is something that we love to do. As we looked at developing ourselves more as songwriters, we've been on a journey of writing not only for church but also branching out into the mainstream world of music. In terms of inspiration, we want to write music that lifts people, inspires them and gets them through tough times. Music is a catalyst - it's beautiful. It can be a way of bookmarking seasons of life. It can be the best part of your day, the best part of your night."

Suddenly finding themselves part and parcel of the mainstream pop world has not been without its challenges, but the group's Ethan remains upbeat about the tension between the demands of the music industry and church membership. He said, "Although it's tough, I think that even if we didn't work for church, and we were volunteers, church would still come first because that's where our heart is. Church is the head and not the tail. So, regardless of what success we have here, we'll still always put that first. Since we all work at church, there's sometimes a bit of juggling involved, but thankfully, church, and particularly the people we work with, have really got behind us and the success of the song. Church has made it as easy as possible for us and Pastor Gary has been amazing."

The group's entrance into mainstream dance music was hardly unexpected. Explained Josh, "Two years ago at a staff retreat, Pastor Gary prophesied over me that the songs I write will shift in focus from the church world and into the mainstream world, and that these songs will have a real impact on the music industry. At the time, it was a bit of a weird thing because none of us ever really thought about becoming pop stars or anything like that. Gary gave me a word, and Johann and I sat down afterwards and dreamt about it. We had a few conversations where we talked and imagined where we could take this. We prayed into it and worked really hard for two years. I was writing about 60 to 70 songs a year, so the songs that you hear today are just the tip of the iceberg. Gary gave us a word, we leant into it and took it by the reins. Faith without action is dead, so we just put some action into our faith."

Clearly, Goodboys have already made a major impact on the lives of a lot of people. Ethan recounted the tale, "We hear a lot of fun stories about people who have been at parties with friends, and the song's started playing and they're able to say, 'These guys are Christians.' A friend of mine also told me about a surgeon who likes to have music playing whilst he operates. One day during surgery, the song came on and everyone was singing along to it. He told the team, 'Yeah, these guys go to church' and off the back of that conversation, they actually ended up visiting."