Gospel Rock is an initiative conceived by Joseph and Patricia Beibi in 2008, with the vision and ethos of finding, promoting and nurturing the emerging musical gifting latent among ordinary Christian artists throughout the UK, allowing such people to develop their God-given talents freely and without compromise. It's a bold venture, which further seeks to bring churches together, be inclusive of all musical styles and increase cultural awareness of the fact that gospel music can have a hugely positive impact and raise self-awareness.

During 2009 more "strategic partners" joined the team and a website was launched (www.gospelrock.co.uk). Then came the bringing into being of a Gospel Rock Contest, a kind of Christian version of the X-Factor, but without all the hype and certainly without all the cynical and at times derogatory comments from judges (in any case, the organisers point out, this was to be a "competition" in one sense only, for who can accurately evaluate the anointing of the Holy Ghost that each artist carries?). The contest was advertised in animated 3D form on platforms of interested parities such as UCB television and the Cross Rhythms website (both of which organisations became keen sponsors of the initiative). A huge interest in the contest was generated and over 250 acts from across the UK applied to participate. By the spring of 2010 NGM (New Generation Music & Mission) Academy, with their unique experience and expertise, had caught the vision and, significantly, offered to run a boot camp for the finalists. In May more than 200 invitations were sent out and the search was on.

Auditions began that same month (May 2010) in Manchester and by the following month the selection had been narrowed down into semi-finals, testing both the nerve and musicianship of contestants and the professional judgment of the panel of judges. The Grand Finals were held on 19th June at the Ealing Christian Centre, West London. A diverse assortment of outstanding vocalists, instrumentalists and songwriters lined the platform at the end of the evening to hear the winners being announced, including Martin Crowley, Saving Strike, Freed, Roni Smith and Torishe. But the winners were:-

DaViglio, an acoustic duo comprised of Deborah Davie and Micki Consiglio, who use their own material as well as popular Christian songs to relate deep spiritual truths

Oyeyemi Oyetunji, (or Oye for short), a 20 year old drummer, singer and songwriter, who won the urban section with his interpretation of Mark Schultz's "He's My Son".

The prize for each of these gospel acts is a much coveted record contract. As part of the deal also, the winners agreed to take their show on the road, doing a mini-tour of the UK mainland in the autumn of 2010. Numerous other Contest entrants agreed to join them on this unique experience. Beginning in Manchester on the last weekend of August, the tour has so far taken them to Oldham, Leeds, Prestwick and Edinburgh.

The team received a very enthusiastic reception from a full church in Edinburgh's Holy Trinity Church of Scotland on Saturday 26th September (home church of this reviewer). Scotland's own Steph Macleod opened the set with his first concert rendition of "Crucifiction", as directly a cross-centred song as you'll hear, and a central focus of Steph's dramatic testimony. Then came DaViglio, whose appealing harmony vocals charmed the audience on the infectious, gently-flowing "As I Am", followed by the more upbeat "My Redeemer Lives", one of many popular worship songs the girls like to perform. This song quickly had everyone on their feet and clapping. Audience participation in fact became a main feature of the evening, as at least one song from virtually every act was one of worship, and the entire set became an expression of earnest adoration to the King of Kings. 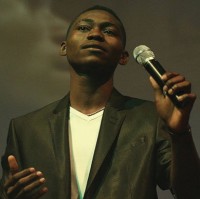 40 year old Donatien Tivoli formerly led worship in his home church on the Ivory Coast, which was attended by over 4,000 people. Now based in London and on tour with GR, Donatien delivered two unhurried and obviously passionate offerings of worship set to pre-recorded backing sounds. Great vocals, engendering much feeling, not least in the simple but beautiful "My Life Is In Your Hands", part of which Tivoli sung in his native French. From the Ivory Coast to Glasgow, which is where Lorraine Handling comes from, as was indeed obvious from her warm accent. "Happy Day" was a joy-soaked take on Tim Hughes' original, while the more thoughtful and atmospheric "Who Can Compare" reflected the glory of God in creation and easily portrayed the strength of Lorraine's vocals. After a 10inute interval stepped another Scottish female vocalist to the stage. Rebecca Hardie serves as a singer and songwriter for the Exile Band, a Christian group based in Edinburgh, and three of her songs feature on that team's 2009 recording, 'un / broken'. Accompanied by her own keys, Rebecca competently sang "Glorify Thy Name" and her gentler "Be Still", a personal testimony about surrendering all to God when things aren't going MY way.

Gospel Rock winner Oye was next to appear, having just stepped off the plane from London an hour previously. His winning "He Is My Son" is an unusual and moving story about a father pleading with God to heal his sick son. Oye's vocals are soulful and versatile, as evident on this and the poppier "Mighty To Save", which Hillsong number was rendered as rip-roaring, energetic praise.

Several artists testified to their former addictions to drink or drugs. Kathryn Adams' story is almost too painful to repeat here. "I've come from a broken and lonely place," she vulnerably shared, "a dark, desperate place." Comparing herself to her old battered cooking pot, which she held up as a visual aid, the singer from Leeds insisted that God still had a use for her wounded life. A singer, songwriter and worship leader, Kathryn considers it a privilege to have been "brought up marinated in Gospel music and worship," having sung as a child with siblings in many different churches, while her dad played the accordion. Since then she has shared stages with and sung backing vocals for Raymond & Co, Israel Houghton, Benny Hinn and others. Her velvety, soulful vocals touched the hearts of everyone listening as she delivered her moving testimony in song, "Jesus Rescued Me", and the slightly rambling "Moving Forward", being backed on each by Steph Macleod's deft acoustic guitar, especially commendable since they had never before played together.

Peter King, a singer from Manchester, delivered a most striking and utterly funky version of "Awesome God" before Johnny Russell, another Scot, rose to the challenge of keeping up the musical quality so far achieved. This he accomplished effortlessly, with a striking Celtic take on "Amazing Grace" (Tomlin's version). No stranger to public singing, Jonny has previously sung on Michael Barrymore's "My Kind Of Music" and Jane MacDonald's "Star For A Night". These days he serves as worship leader in his dad's East Lothian church. Russell let his remarkably proficient voice loose on a wonderfully bluesy version of the old "Power In The Blood" hymn as well as the rhythm and bluesy "There Ain't No Grave". Wonderful stuff, which had many on their feet and dancing.

Just as he had opened the evening's programme, so too Steph brought it to a close, with a further three of his self-penned tunes. "Hope Shines On", "Snake Eyes" and "Shine On" all appear on his debut recording 'Light In The Darkest Of Nights' - three powerful songs in that acoustic rootsy-blues style that is his own. Thus ended a three-hour-plus extravaganza of wonderfully diverse and top quality musical entertainment, all the while lifting up a banner for the Lord. During October and November 2010 the Gospel Rock team will appear in Newcastle, Leeds, Edinburgh (different venue), Sheffield, Liverpool and Leeds (different venue). Check the Gospel Rock website for more details, and if you live near enough, be sure to attend this enterprising road show. As well as providing support to the Gospel Rock cause, you're likely to be thoroughly blessed.