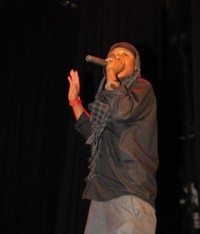 Gospel Rock, that bold initiative set up by Joseph and Patricia Belibi back in 2008, has the declared objectives of encouraging and motivating Christian musicians from all over the UK, providing a platform for them to express their God-given talents and nurturing them in order that they become all that God wants them to be. The longing of the founders is that Gospel Rock serve as a bridge between gospel and mainstream music, and that gospel music receives the recognition in the contemporary music scene that it truly deserves. Further, these guys know full well that gospel music has the power to change people's lives for good - and forever.

The title Gospel Rock may in fact be a bit misleading, for only a minority of the acts under their care could truly be termed rock acts. A better understanding of the epithet comes with realising that it is "Good News (Gospel) in Christ" (Rock). Joseph, as full-time Managing Director of the ministry, is very keen to stress to all participants the true meaning of worship, which he believes is not primarily about music at all, but about bowing down before the Lord in true humility; about full surrender and a life lived in absolute obedience to him.

Although the essence of Gospel Rock is more about ministry than about competition, one truly exciting part of the initiative has become the annual Gospel Rock Competition, which is becoming a bigger event as fame of the enterprise expands. This year's heats were held in a number of locations throughout Britain, attracting entrants from all corners of the country. This paved the way for four semi-finals; that for the North East held in Manchester on 14th May; the North West event, held in Durham on 27th May; the Scottish semi-final held in Edinburgh on 3rd June; and the fourth semi-final to take place in London's Kensington Temple on Saturday 11th June.

The Edinburgh experience occurred in Holy Trinity Church of Scotland, located in the south west of the city. Not even the fact that it was Scotland's hottest day of the year so far stopped a couple of hundred people packing into the rather clammy auditorium for what turned out to be an absolutely terrific two-and-a-half hour musical extravaganza. The stage had been well prepared in advance, with a fine lighting set-up (supplied by the church), and a sound system that worked marvellously smoothly throughout. With everything in place, the show commenced bang on time, with an opening song from Gospel Rock Operations Director, Jonny Russell (worship leader in his father's Tranent church), who rendered Steve Green's magisterial "Kings Shall Bow" with customary gusto. 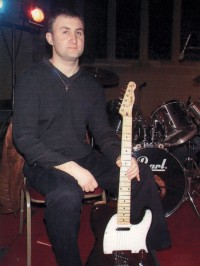 This being a competition, the four judges (Marion McNeill, Graham McNeill, Evelyn Lodge and Allan McDaniel) sat near the front in X-Factor format. The opening act was Xander, a four-piece led by (Ale)Xander Duffy from Markinch in Fife. Having previously set parts of the Books of Moses to his own music, this Free Baptist Church member chose another Old Testament portion - the first Psalm of David, to perform for this set. Not only did he let his voice soar to astonishing heights, but he was able to hold these notes in that full-thrust position for what seemed like a time potentially injurious to his own health! Xander followed this with another self-composition, "Jesus Saves", delivered in yet more raucous praise form, and with accompaniment from guitar, drums and - enchanting trombone.

Next on the scene came Tracy, with "Flower In The Rain", an inspirational soft-pop song popularised by Jaci Velasquez. And like the Latino singer, Tracy delivered this beautiful song with obvious feeling, her strong vocals at times impressively soaring. The third act was a trio of guys named Success, consisting of piano/vocals, drums and bass guitar. They began the Hillsong favourite "Mighty To Save" gently - and with a few off-notes! - then suddenly burst into an instantly infectious upbeat reggae groove which immediately got the audience swaying and clapping. A great praise anthem, the conviction with which the song was sung made it clear that Success wanted all to know that Christ was indeed the only true "Author Of Salvation". Dorothy Barr was next to appear. With gentle keyboard backing trax she led us in some unhurried moments of adoration in the form of the worship song "Because Of Who You Are". Her arm often raised heavenward and her eyes at times closed to the world, no one could doubt the sincerity and passion with which Ms Barr offered her able arrangement, it also being evident that the singer's confidence grew as the song progressed. Accompanied by friend Scott on acoustic guitar, the next contestant was Grant Cameron, a singer/songwriter who delivered a soulful version of the Hillsong United tune "From The Inside Out".

Then rose to the challenge Cynthia Gentle, with a song that proved true to her surname, a re-interpretation of the 1997 Bob Dylan composition "To Make You Feel My Love" (later popularised by Adele), although it appeared that Cynthia adapted the lyrics a tad to comply more with her Christian worldview. Did Dylan have this same worldview in mind when he wrote the opening poetic lines, "When the rain is blowing in your face/And the whole world is on your case/I could offer you a warm embrace/To make you feel my love"? With live, exquisite piano support, Ms Gentle gave the song a gorgeous bluesy-soul feel, albeit having to rely on a printed sheet for some of the wording. Thalo Blue is, apparently, an intense and extremely bright shade of blue. We never quite found out how "extremely bright" the longhaired lads that made up the Glasgow band of this name are, but intense (and LOUD!) their heavy rock sound truly was! Formed only last September, it annoyed one judge that the gospel message was impossible to interpret through the wall of guitars and pounding percussion. Still, the chorus refrain from their self-composed song "I Am Free" did come over loud and clear and even non-hard rock enthusiasts appeared to lap it up.

An interesting aspect of this event was that we had no idea in advance who the next act to appear was, let alone what genre of music they would be performing. Hence a sense of keen suspense hung persistently over the hall. Aaron Mkd is a charismatic dude from north Glasgow, strongly influenced in his youth (currently knocking on 20!) by R&B and hip-hop. Once on stage Aaron immediately set about building a rapport with his audience via a humorous warm-up routine. This accomplished, the gospel-rapper launched into a session of infectious rap-worship, suitably beginning the song "On My Knees" - on his, erm - knees. Back on his feet, Aaron was ever on the move, dancing, jumping, strutting around - and with the crowd entirely on his side all the way. 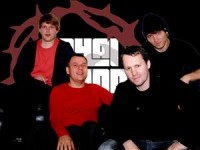 Based in the Ayrshire town of Prestwick, Scott Nicol has been involved in the Christian music scene for many years, having performed at scores of locations across the UK with his previous group Maybe I'm Dreaming, his current line-up The Limitless Sky and as a solo artist. With several recordings to his name (also a worship leader in his home church), Nicol spoke of his calling to write songs with subtle spiritual content, thus enabling him to "minister prophetically" over people in secular venues such as pubs and clubs. Having recently returned from an American tour, this folk/rocker jumped confidently on stage to render one of his own songs, "Live Like A Lion" (inspired by a friend who was killed at war in Afghanistan). A man obviously used to live shows, it was clear Scott has something of a lion-heart himself, quickly wooing the audience with his punchy performance, self-accompanied on guitar.

El Mafrex is another artist with a fair legacy of musical experience, having been lead singer in a boy-band (M.O.D. - Men Of Destiny) in his homeland of Nigeria some years ago. Now based in the Scottish capital, and operating as a full-time Christian musician, El Mafrex performs in churches and conferences around the UK, moving freely between reggae, jazz and R&B. Keen that his music manifests a positive message, that became very evident with the forceful rap sequence he delivered at this Edinburgh gig. The potent message of the lyrically abundant and fast-moving "Transform" (lyrics impressively well memorised) is that Christians stop conforming to the things of this world - and this he delivered with palpable energy; the rapper providing a terrific visual and vocal performance, which the audience clearly loved.

The eleventh and final act to take the stage was the Glasgow-based five-piece, Royal Foundlings (name suggestive of former waifs and strays, now sons of the King!). Formed two years ago, the band have received considerable radio air-play with their debut EP and a more recent full-length recording ('Foundations'). With an initial hiccup calmly sorted (broken guitar-string), the team were surely asking a rhetorical question with the song title "Can You Hear It?". For the sound was LOUD - with screaming guitars and distinct, dexterous bass, these guys truly rocked the joint; their tight co-member unity and excellent crowd rapport winning the approval of everyone.

All acts having done their bit, it was now time to vote. Choices made, voting cards were collected, and the votes counted during the interval. The air being warm and sticky, many surged forward for cooling refreshments. Then, after a couple of fine soulful songs from guest artist Peter King & Freshtouch, the winners were announced, each to a drum roll... First, Aaron Mkd; second, Royal Foundlings; third, Scott Nicol; and fourth, Xander. 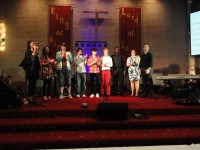 These four were all voted through to the Grand Finals (I am reliably informed that El Mafrex was later added as a fifth finalist from this heat, by decision of Gospel Rock Management). The Final will be held in London's Lighthouse Hall (Camberwall Road, SE5) on Friday 8th July. A Boot Camp for all finalists will take place in the morning and afternoon (training on being a worshipper), while at the closing event renowned worship leader Ron Kenoly will appear as guest artist.

Great news for the stated acts - comprised solely of guys incidentally - though naturally a disappointment to those that didn't quite make it through. Yet the overwhelming sense was that there were absolutely no losers. Every artist had given their all, each one very much succeeding in blessing everyone present, at the same time giving glory to the Lord through their abundant God-given talents. And Joseph's insistence that Gospel Rock is partly an outreach initiative was confirmed by the fact that no fewer than five people at the Edinburgh event raised their hands at the offer of prayer to dedicate their lives to Christ.