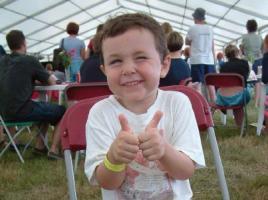 One of the most encouraging indicators that despite its lack of national exposure on electronic media and chronic under funding, Christian music is expanding in Britain is the proliferation of festivals large and small. Where once Greenbelt held a near monopoly in the area today there are numerous festivals bringing a showcase to indigenous Christian music talent. One of the best is the Grassrootz Festival, to be held this year on Saturday 10th July at the Eridge Estate near Tunbridge Wells, Kent. Its line up this year is particularly impressive. Booked to play are Britain's most popular Christian rockers Delirious?, the UK's flag wavers for gospel music London Community Gospel Choir, critically acclaimed singer/songwriter Cathy Burton, popular Bristol rockers Steve, breakbeat/rock revisionists thebandwithnoname, mellow songstress Nicki Rogers as well as intriguing grassroots acts Hyperfuse, No More Horses, Plan A and Adam And The Previous People.

The event is organised by Nick Cheesman and Simon Colenutt who both have a passion for Christian music and a conviction that it is a key tool in communicating spiritual truth. Nick spoke about how Grassrootz began, "The event initially sprung out of a successful local youth concert in Tunbridge Wells, called ID, which still sees several hundred young people each month come to spend time in an environment of worship, with a broad range of locally and nationally known bands. The professionalism and inventiveness of an ID event was to be recreated into a one-day outdoor event, Grassrootz. In its three year history, Grassrootz has seen its numbers climb from 650, to 1500, to 2500 in 2003, and the expectation is for a larger turnout at Grassrootz 2004."

No event as large as Grassrootz can of course be sustained without a small army of volunteer workers. Said Simon Colenutt, "It is run with the help of a large team of around local volunteers from over 20 local churches and the event has been able to continue over the last three years through support from local churches and individuals. It is in many ways an event run from the 'grassroots' level, with supporters and participants grown from the bottom up."

The setting for the event is the beautiful site at the Eridge Estate, near Tunbridge Wells in Kent where the Main Stage overlooks the backdrop of a large lake and rolling hills as far as the eye can see. Grassrootz also has a huge Performance Cafe, a Seminar Tent, Battle Of The Bands Tent, as well as a bookstore, music store, village area and prayer tents. Young people as well as families are able to enjoy the Inflatables Area, The Games Tent and The Kids Tent. Commented Simon, "The Grassrootz team have always put a huge amount of work into making the day as professional, creative and accessible as possible." 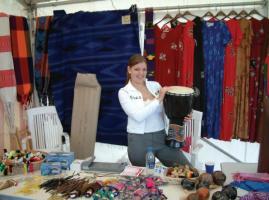 The one factor no UK festival organiser can contend with, of course, is occasional bad weather. Continued Simon, "I remember the crowd at Grassrootz: 02 resolutely staying put and rocking to Yfriday's 'Rain' as it poured down for 20 minutes and again seeing the storm clouds and lightening circle the field and threaten in the evening at Grassrootz: 03 before they dispersed making way for the stunning final set from The Tribe."

Simon is very positive about what Grassrootz is achieving in the Kent area. "With so many local Christians involved in the event we see it as a practical expression of unity in the Church while at the same time being a celebration of God in music and a point of connection for people to experience something of God through the day and through the music. We hope that it is also simply a great day to relax, chill out and enjoy the surroundings and each other. The growth and life of Grassrootz in the past three years has been an organic kind and we believe that it may yet blossom into something much bigger. Starting at 11am, the event has a unique feel in that people are able to enjoy the summer sun and outdoor surroundings, plus a number of bands, seminars and other features during the day and as the evening approaches there is a growing sense of expectancy and build-up as the atmosphere intensifies towards the evening performances, right up to the headline band in the late evening. This unique set-up contributes to what we have seen in the past to be an awesome climax to an inspiring day."