Grooves, Scrooge & The Effects Of Sin

Birmingham singer/songwriter PAUL POULTON has paid his dues. He talked to Tony Cummings. 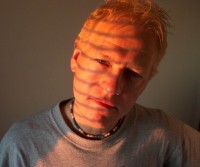 There's something hugely impressive about a musician with such a passionate desire to follow God's call to communicate the Gospel that he's kept at it for 21 years or so, played thousands of concerts, released nine different albums and one EP and yet has never enjoyed the support of a big record company. But then Paul Poulton isn't your standard songsmith. In March 1990 the very first issue of Cross Rhythms magazine wrote about how Paul's songs sometimes drew on the works of CS Lewis and GK Chesterton. It read, "Mix those diverse (literary) elements together with a shot of rhythm and blues, a laid-back Tom Petty-like vocal style and a large dash of the unique Paul Poulton sense of humour and you get somewhere near the flavour of the man's work." This laconic Brummie received his instructions from God on Easter Monday 1988 after working in bands and doing session work when God spoke to him to use his guitar and composing skills to step out as a singer/songwriter. In the first year he did 100 concerts. In 1989 he recorded his first album 'I Think I'm Being Followed'. Paul remembered, "I did a song on there called 'Strange People' (a witty evocation of the peculiarities of church culture) which I still get asked to sing lots of times now."

I asked Paul about how, against all the odds, the Birmingham songsmith secured a Christian radio hit in the USA with "Flaky People" from 1999's 'Flaky' album. "That was one of those songs that every verse just fitted beautifully. It was at the time when there were problems with the President (of the USA) and Monica Lewinski, and stuff - it was around about that time. That got a lot of airplay because there was one verse particularly about flaky leaders who offer us the world when they need us. You know, they fool around in their ivory towers when they've got where they want. It was number two in one chart in the mid-west. It was in the chart for about three months. I mean they must have been really fed up of me after three months, whoa!"

The album which showcased "Flaky People" was actually credited to The Paul Poulton Project. I asked Paul whether such an aggregation still existed. He replied, "Yes they do, that's my band. A lot of work I do solo, but when I'm with my band it's nice energy guitar-based rock and we have a blast. I really enjoy touring with the band. When I go over to America usually what happens is I go solo one year and then with my band the next. I've been doing that since I started going over there, which is nice because when I go solo I can take my little boy and my wife with me as well. I've had a few changes in band members; at the moment I've got a guy called Ian Price who's been with me for quite some time now. He's the bass player, a great, great guitar player and sings bv's as well. A nice drummer Matt Wallis, whose dad's a bishop! I say, 'So? My dad won a medal in the war!' We have a great time on the road together. When I (plan a) tour with the band I tell them, 'Put that month aside, because we're going to tour that month.' They're working with other people the rest of the time."

2005 has seen the release of two Paul Poulton albums. He spoke about the inspiration behind 'Affected'. "Just as I'm going around my daily life I get inspired. I was in my car the other day and thinking about a family I met in America, they were such a nice family; beautiful kids, good marriage, beautiful house, good job, nice church. Then the lady emailed me telling me they were going to split up! I thought, 'Oh, no!' I couldn't believe it! This thought suddenly hit me, that sin affects all of us, every one of us on the planet, it affects us somehow. When I got home I got my guitar out and got this groove going and wrote this song called 'Sin Affects Us All'. As it happens they didn't split up, which I'm really pleased about, they got it together - but I got a great song. God does inspire me and it's no good writing a song without the inspiration; I don't churn songs out. I don't think I ought to write a song because I haven't written one for a while. You know I heard Sting say that, I heard him on TV. They said, 'You entered into this contract for 10 albums with a record company.' He said, 'Yeah, but that's ridiculous because you can't write until you're inspired,' and I totally identified with what he was saying. Without inspiration you haven't got a song."

Another new Paul Poulton release is the Christmas epic 'Grooves 4 Scrooge'. Commented Paul, "As soon as you mention the words Christmas music it sounds like you're 'middle of the road' and I'm not like that at all. I always try to be cutting edge, because that's the way it comes out. Over the years I've worked hard on the carols, getting some mean licks and mean grooves to them, because the carols are important. They've got great words, you know? Charles Wesley - he worked on one particular song for years and years, but he could never get the third verse right and so he left it in his drawer and every now and again he'd get the song out and try and work on this third verse and he just couldn't get it right. And then one day he got inspired - he suddenly got the piece of paper out, wrote the third verse and then shortly after that he died. That song is 'Hark The Herald Angels Sing' and it's a great song, great poetry, but particularly the third verse; 'Born to raise the sons of earth/Born to give us second birth.' Every Christmas people sing that song, it's in the psyche of the western world, because he waited for the inspiration to come. So we give this real mean groove to it and people really join in with it. I like to do that with the old songs; I do it with some hymns as well, I give hymns a bit of a mean rock 'n' roll feel, 'cos that's how we've all grown up - we've all grown up mean and the music has to suit it!"

Paul is now immersed in a Christmas tour. He finds that Christmas is his busiest time on the road. "I've already got the Christmas tour well under way. There are a lot of dates in for that and people have been asking me about December 2006! I've got people booking that up as well, so - yeah, I'm always on tour. Wasn't it Bob Dylan who was on the never ending tour? Well, I've joined him on it!"

If this Christian music journeyman didn't have enough on his plate with his touring and recording, Paul is also one of only three volunteer journalists who from issue one of its magazine has reviewed for Cross Rhythms. I asked Paul whether he had ever tired of turning his critical ear to others' music? He responded, "It's something that I really enjoy. I look forward to them coming through the post. I do enjoy writing because I'm a songwriter, so writing prose comes naturally to me anyway. So I enjoy it. as long as it's not the Cedarmont Kids!"

I am thrilled that this guy sent a friends request to me on myspace.com/miketcali He's the first person who I did a websearch about because I can tell he's been arounfd the block by his lyrics and sound. Many people don't fill in the "bio" sections, they only have itinerarys. I'm glad he left all that to our own diligence, and that led me to "look him up." This is the kind of guy I like to know about as a musical guru that I am at age 42. I am just now learning the guitar and can't wait to "join the band".

If you ever get the chance to see Paul live in concert, youll be in for a real treat. Excellent musicianship,cracking band,orignal thoughtful songs,deadpan humour and a clear gospel message that the guy on the street can understand. A genuine 100% geezer. He did a christmas concert at our church and rocked the flock. Amazing!

I have known Paul for many years. The Paul Poulton Project did a great job at our church just a couple of weeks ago with the Christmas Gig.

His character comes through in the interview. A thinker with an understandable message.