HillaryJane: The singer rapper from Houston with her latest radio hit "God Of Always" 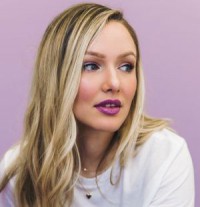 A hot new song on the Cross Rhythms playlist is "God Of Always" by HillaryJane. Speaking about her radio hit she said, "'God Of Always' is a deep but also really fun song. This is an honest look into my personal mind and I think this is the mind of every believer."

She was born Hillary Jane Ashton Stiles on 25th September 1993 in Palo Pinto, Texas, and raised in Houston, Texas. In her teenage years HillaryJane would, rather unenthusiastically, attend church. Then, Hillary was invited to join her church choir, not because the choir director had identified any particular singing talent, but because he wanted to increase Hillary's marginal church involvement. It brought forth unexpected fruit. Said HillaryJane, "I couldn't sing. I never desired to sing." When she became a Christian, her apathy toward singing vanished. "It's almost as if, when I gave my life to Christ, he multiplied my talent 30 fold," she said. "All of a sudden, I could sing way better. All of a sudden, I desired to lead worship, sing and lead music for him."

Within a week, the church choir approached her to lead worship for its preteens. Soon after, she started to serve in youth ministry. Her faith grew stronger, although it was tested. Her mother underwent chemotherapy for cancer, and HillaryJane's heavy church involvement stressed her mother. Explained HillaryJane, "I was so highly involved in church. . . always going, going, going, and that stressed my mom out. She wanted me to be home more. At the time, I thought it was more important to serve in ministry than be home with my sick mother. My priorities were a little bit messed up." Doctors told HillaryJane's mother if she didn't get stress-free, she could die. She kicked HillaryJane out of the house. They had left HillaryJane's father over a decade earlier, so she moved in with a church member.

The singer needed rent money. After working at Jumpalooza and Walgreens for the next two years, friends and family advised her to attend college. Not taking their advice, HillaryJane chose music instead. Or, as she believes, God chose music. "I had an overwhelming feeling in my heart that I was going to be an artist," said HillaryJane. "The Lord put on my heart that he's going to use these talents that he gave me full-time - that my ministry is going to be my career."

HillaryJane had joined the hip-hop group Second her senior year. Battle-rapping friends over the phone was her only prior experience. But the first verse she ever wrote impressed her friend Archie enough to feature her three times on his mixtape 'I Am Second'. They performed frequently at orphanages, youth groups, car shows and clubs around Houston. The ovation they received even at clubs told HillaryJane, despite her sceptics, this is what she's supposed to do. "It's not normal for a Christian artist to go in a club and talk against everything that everybody came in there to do and they love it," she said. "That has to be God."

HillaryJane's entry in a Slingshot Movement feature contest was heard by Rapzilla website contributor Steven Solis, who recommended Hillary to Chad Horton, the co-owner of a new label looking for talent, Infiltrate Music. With Second, Hillary had been primarily rapping. But it was her singing voice which won Horton over. He said, "When I heard her sing, I thought, 'Wow, she has the full package'." In July 2014, Infiltrate released HillaryJane's debut, an EP, 'Stix And Stones'. It was produced by Grammy-winning duo 808XELITE, who have worked with such artists as Lecrae and Papa San.

'Stix And Stones' had the critics scratching their heads. HillaryJane was an artist impossible to pigeonhole. One reviewer suggested that the song "Chimneys" on the EP "would fit perfectly into a playlist next to Lorde, Rihanna and BeyoncÃ©" while the rapping on another song on the EP, "Celebrity" featuring emcee Thi'sl, brought forth praise from hip-hop fans. In December 2014, Infiltrate tried releasing a stripped-down acoustic version of the EP. But for some inexplicable reason neither version of 'Stix And Stones' sold well and Stoke-on-Trent's Cross Rhythms was about the only radio station in the world to give heavy airplay to "Celebrity" and "Chimneys".

But rather than being one of those no-hit-wonder stories of which the music industry is full, HillaryJane has kept on recording. In 2018 she released a series of singles: "Replay" (co-written and produced by Josh Zegan, writer producer of Christian hits for acts like Stars Go Dim and Bianca), "L.O.V.E.", "With Me Now" and a Chris Howland remix of "Replay" while this year she issued "DÃ©jÃ  Vu", though it's her "God Of Always" single, her first on Dream Records, which has started connecting with Cross Rhythms listeners.