HopeGene: The Surrey-based trio showing how to "Step To" the light 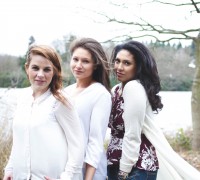 By the time you read this you might well have heard "Step To" by HopeGene on Cross Rhythms radio and if you haven't yet, you're in for a treat if your tastes veer towards radio-friendly R&B. So who is this trio of soulful sistahs who have seemingly emerged from nowhere to catch the ears of radio station programmers with their independent EP 'Be The Light'? CR's programme controller Chris Mountford talked to the group's Shara Brink to get the lowdown.

HopeGene consist of sisters Shara and Carla Brink and Rachel Spring. All three are members of the worship team at Hope Christian Centre in Staines-upon-Thames, Surrey. Shara and Carla met Londoner Rachel when attending Royal Holloway University of London in Egham, Surrey. All three began attending the Christian Union and by 2008 were performing their first gigs together under the name Hope Generation. Explained Shara, "We all had the same heart and the same belief that we wanted to take the message God gave us further than the walls of our church, for a broader audience. We brought this to our pastors, then we got the opportunity to go to the Gospel Music Association (GMA) conference and competition in Colorado. We managed to get through to the semi-finals, which blew our minds: we were a baby band, not even properly formed at the time. It was a huge eye-opener. Because they had gospel artists there, top people in the business, ones who critique your work, we learnt a lot; we took on board the advice they gave us."

Shara explained who does what in the group. "Carla is the lead, predominant singer, and she's also been a huge influence on the songwriting. Rachel plays every instrument under the sun - except wind instruments. Carla can come up with lyrics, but she's not musically-trained; she'd sing it, then Rachel could just play it back to her. We've all grown in writing music together, which has been really enjoyable. I sing, and Rachel taught me how to play bass, so at times I perform on the bass. Rachel predominantly plays keys. That's how it goes."

In 2010 the trio returned to GMA, this time held in Nashville, and, having greatly improved, ended up as the first runners up in the competition. The following year Hope Generation made their first recording, the single "Breathe The Life" (a remix of which appears on the 'Be The Light' EP). 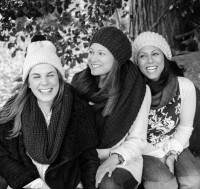 The recording breakthrough for HopeGene has been their linking up with dubstep and garage producer Jimmy James (who also records music under numerous other monikers including JJXO, Jimmy James Beatz and 45C). Rapper Sammy G and Jimmy came to Hope Christian Centre where they met the girls. Explained Shara, "We had recorded music beforehand, using other people, but it wasn't gelling us with - what we thought our sound was. Obviously we're not into dubstep or really hard garage, but we knew Jimmy in terms of the standard of excellence. We contacted him, gave him our most difficult song - 'Praise, Praise, Praise' - and we've never left him: he's been exceptional with our music."

Shara spoke about the track currently opening doors for HopeGene, "Step To". "This is one of our most recent we wrote, and we just love the music. Our producer Jimmy James has been so amazing at musically articulating our vision. When he gave us the beats and the sound, we got so excited. This one's really about stepping into the light. Whatever situations people encounter, we just want to step into God's light, his word, his way - and follow that path. It's got a catchy line to it, so we keep hearing people say, 'We're stepping into work today', waking up with this song stuck in their head."

Shara was keen to emphasise the spiritual dynamic behind their music. "We all have hearts for worship - it's the door to open up dialogue and have conversations with people. Everyone can relate to music. After they've heard our songs, what we're mostly concerned about is that people see us in our journeys and our flaws, and are able to relate to that. We want to literally, as our EP says, be the light and bring hope: our message is a message of hope. We are still on our journey to Christ, and we all go through difficult things and different circumstances, but God still gives us hope that we'll come through that. That's what our message is, just to be a ray of hope."