Hydro: Ambient dance from a Bristol-based collaboration impacting the mainstream

A new ambient dance album is set to create waves in clubs up and down the country. Dave Drodge spoke to HYDRO. 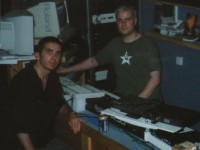 The production collaboration of Robbie Bronnimann (65dBA) and Ray Goudie (co-founder of New Generation Ministries) has produced an album, 'Spiritualization', that contains some of the most innovative music the Christian world has seen. And with artwork making it look like something you would find in the ambient section of any High Street record store and plans to unleash the group nationwide, this is no ordinary Christian release. So how did this all come about?

"The basic idea for the album came whilst 65dBA were doing a tour of the States," says Robbie. "We played our remix of 'Purify' to some secular DJs and they suddenly became really interested in us." Ray adds, "Then as we travelled, we came to realise the inherent spirituality in the clubs and saw that the people were searching for some sort of-a spiritual experience through the music." It was then that Ray and Robbie saw the need for music designed to transmit something of the Holy Spirit into the secular clubs.

When they returned to Bristol, Robbie and Ray then started praying about specific themes for an album and interestingly, decided to invite people from their local church into the studio. "Our church has been very affected by the new move of God, so we got everyone in, held a worship and intercession meeting and recorded the results as the Holy Spirit fell," Robbie says excitedly. Everyone's responses were then used in various subtle ways throughout the album. The idea behind the track "Birth" for example is the Holy Spirit making prayer out of, and giving birth t o something new through "our aching groans" and has someone groaning as the focus for the song.

Other songs that contain experiences of God include the techno-influenced "Rawar", a track about spiritual warfare. It ends believe it or not with a reversed drum prophecy. Ray explains, "We asked Phil, the drummer from 65dBA, to come in and bring a prophecy through the drums. And as he prophesied, he got faster and faster, but we ended up recording it backwards so it slowed down."

The 'valley of dry bones' is the theme for the song "Breath". "We hope that the song will allow the Holy Spirit to breathe upon that which is dead and bring it to life," says Ray. The song had its vocals provided by Joanne Hogg of lona fame (as did the excellent remix of lona's "Beyond These Shores") and was originally going to sound very much like something from lona. Says Robbie, "But after the vocals had been laid down, we decided to change it quite considerably into a 'Future Sound Of London'-type track. Joanne was quite surprised when we played it back to her!" The song actually ends with a period of silence. 'There was a period when we were all worshipping that a tremendous silence came over everyone, so I sampled it (!) and stuck it on the end of 'Breath' as the final lines of the song call for the Spirit to breathe on us." Tim Dendy, who has done a lot of work for ambient record label Warp Records, has completed a promotional video of the song that "may or may not be" made available for general release. "Who knows, we might even produce a video of the album," muses Robbie.

The album is already receiving a lot of secular interest (EMI are already distributing it throughout Holland), which is exactly what was intended. "Our absolute goal with the album is to get it into the (secular) clubs. We want club goers to be affected with the Holy Spirit." They do admit though that it is very much of an experiment and have already come under fire from Christians who don't understand what they are trying to do. Ray explains, "We found out whilst recording that hypnotist Paul McKenna had recently got together with secular dance producer Paul O'Duffy and recorded an album that sounded extremely similar to ours, only they had used various techniques in order to induce hypnotic states, alter brain waves and things like that." Robbie is quick to point out though that whilst their music might sound similar, their intentions couldn't be further apart. "Our project was very much soaked in prayer and fasting. We want people to have the true Holy Spirit instead of something shallow and false."

Unsurprisingly then, they wanted to get the album into High Street stores. Not only has money been provided specifically to get Hydro into the secular market, but a white label 12" record has already been distributed to all the major DJs in the country. Says Ray, "That came about through secular company Power Promotions, who are dealing with our PR. Managing director and remixer Paul Gotel arranged for the white label to be made, although all the remixing and production was done by Robbie and myself. He reckons that it could go top 10 in the club charts."

Whilst more white label remixes are possible, including a "Gospel Garage" remix of the vocal song "Rainmaker", Ray and Robbie's attitude to the more mainstream songs on the album is decidedly laid back. As Ray explains, "In his review (CR27) Tony Cummings states that 'it's good when we actually get a SONG', but the songs on the album (like 'Rainmaker' and 'You Are The Way') were added almost as an afterthought." Robbie continues, "We're going to release the album in the US, so we needed to have a few 'normal' tracks, otherwise nobody there would know quite what to make of it!"

Also currently on the Orange label are pop/dance team Re:fresh (who don't have their next release ready until summer '96) and 65dBA, who have recently gone through some major changes. The band, formerly signed to the Integrity label, will now simply be called dBA and consist only of Robbie and Shaz Sparks. "As with Hydro," says Ray, "we want to get dBA into the High Street stores, so we're bringing several singles out over the next six months or so." Their first single, "Spiritual Woman", should be out by the time you read this article and is taken from an EP that will be available in Christian bookstores by the end of the year. An album will also be out late spring. Judging from the two songs I was able to hear, I'd say that people will be very surprised at the giant leap dBA have taken since their last album 'Shout'. "More stylised, more European, more techno," says Robbie.

The next offering from Hydro will see a few changes too. Its provisional title is 'A Rhythmic Excursion (That Spans The Globe)' and is going to be influenced by ethnic/world music. Only one song has been completed to date, a superb jungle track complete with a didgeridoo backing, which has already been aired publicly in conjunction with the World Wide Message Tribe at the Flevo festival in Holland. Robbie explains, "It was very much a last minute experiment, but we wanted to challenge the European Church that dance music could be used purely as worship. It caused a bit of a stir, but I think it worked!" The rest of the album has yet to be recorded and a release date is unclear. Ray says, "We would do it next week if we had the time. The Hydro project has been so much fun!"

The opinions expressed in this article are not necessarily those held by Cross Rhythms. Any expressed views were accurate at the time of publishing but may or may not reflect the views of the individuals concerned at a later date.
About Dave Drodge
Dave Drodge lives in Bristol and is fascinated by all aspects of dance club culture.

For more on Hydro visit the Hydro artist profile