On Sunday 19th March, Debby Barnes and As If... ministered at a new event in Thame, Oxfordshire. Tony Cummings reports. 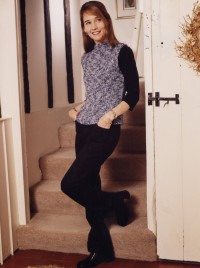 The monthly IGNITE event held at Christ Church, Thame, Oxfordshire is a shining example of what can be achieved when a bunch of local churches work together to introduce something creative and spiritually invigorating to the church calendar. The format is simple enough - a band, a soloist and a speaker make a Jesus-centred presentation - and judging from the warmth of the response from the diverse crowd it scratched where people were itching. What lifted the event to the outstanding was the sheer quality of the musical talent on offer. When not running his Appletree Recording Studios, Phil Goss fronts an excellent little band festival goers know as As If. who down the years have played everything from powerhouse rock to dancefloor pumping electro. But I wasn't prepared for the surprising addition of a superlative electric violinist, Tony Collins whose temporary inclusion in the As If. ranks transform the band into full on Celtic rockers. They kicked off with a jaunty, mid-tempo Goss composition "Love Is", which was new to me but apparently is on As If.'s brand new 'Plugged Out' album.

For the next number, Debby Barnes seated herself behind a mic stand and took over vocal duties with the band on the wistful hymnal "Enter In". Debby's voice literally soared in praise of the redeeming light. Another Barnes composition, the mid-tempo "This Love, This Light" featured a breathtaking violin solo from Tony, before one of the evening's musical highlights. "The Mercy Tree" is a song that first emerged on Debby's debut album 'Hurry To This Heart'. Here though the number was transformed with a dazzling blend of a thundering rhythm on the toms, Celtic violin, loud rock guitar and Debby's passionate, gutsy vocal as she declared she was making her way to the Mercy Tree. Despite a Powerpoint putting lyrics on the big screen the crowd had sat quietly up until now. But Phil got them singing with a recently penned worship chorus "I Give My Love To You". By the time he got to verse about lifting hands, four or five people did indeed lift hands in worship. 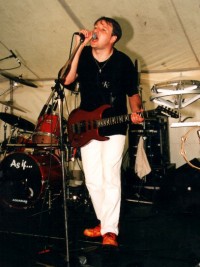 Next came a message from Debby's husband Ken Barnes. Ken, an American now based in the UK, was by turns insightful, hilarious and deeply challenging as he took us to the cross of Jesus Christ. Superbly echoing that theme Debby then sang her beautiful, haunting ballad "Clinging To The Cross". Equally impactful was the next song, "Down To Love", As If.'s Phil offering a top notch vocal which brought all the lilting wistfulness from a song which As If.'s fans first heard on the band's 'Full Bloom' album.

Finally, this most skilled of musical ensembles got the crowd to their feet and clapping for a rocking and reeling "Wait And Wonder", another song form their 'Plugged Out' album. Its Irish jig vibe was accented even further at the close when the band tore into a brief fragment of "Lord Of The Dance", no doubt in honour of their virtuoso guest violinist who'd once gigged with the famed Riverdance ensemble. And so IGNITE came to a joyful close. It was a hugely enjoyable night. I doubt whether many local church celebrations and alternative worship events can have access to a regular "house band" of the crisp professionalism of As If. and Debby Barnes. But more than the sheer musical quality (which utterly belied IGNITE's free admittance policy) was a sense of hearts young and old being warmed by God. IGNITE did indeed light some fires.

I am excited that the Lord is being lifted up on campus. You will all be in my prayers. I will stay in touch and see how the Lord is working in this ministry. Bless you all.

Great to read about Ignite, and the Barnes connection. I spoke with someone from Christ Church what now seems like many years ago. (Okay, only 2 years. But it *seems* like a while back.) I wish I could say 'alt worship' was big out here on Long Island, but it ain't. But you Brits, well ... just keep at it!

I count it an honor to be among Ken and Debby's friends here in the US. We miss them so. They will bless any- and everyone they meet. Wishing I could just get on a plane and be there for Sunday morning! LOVE U GUYS!!

We loved the article and only wish we could hear Ken and Debby more often-in person!

Hi. My name is Ruth. I have been going to Ignite since it started. I am really enjoying the service a lot. The talks and the worship are powerful and I am really glad that there is something to look forward to each Month. love Ruth x

I am Ken Barnes sister and Debbie's sister in law. I am so pleased that others have heard Debbie's voice, which I always said sounded like an Angel. Praise God. I wish I could have been there for this wonderful session of worship.