Ian Ottaway: A Surrey-based worship leader "too old to be famous" 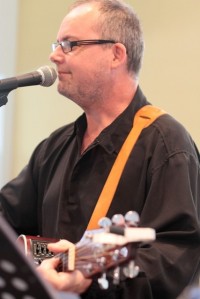 Ian Ottaway is a highly skilled worship leader and songwriter. He is also a realist. He tells the story that when record producer Caroline Bonnett first began working with Ottaway she said to him with remarkable candour, "What do you want from this, because it's unlikely that you will ever be famous. You're too old!" Yet despite his age, Ian is 45, and his lack of fame Ian has written songs that have blessed many people and over the years released some fine independently produced albums. He leads worship at Bookham Baptist Church in Surrey and has done so for 18 years. He spoke to Cross Rhythms about his life and ministry.

"I was born in 1966 at the Princess Tsahai Memorial Hospital in Addis Ababa, Ethiopia. I was born there because this was where my parents were serving as missionaries with SIM (Sudan Interior Mission or, Serving In Mission as it is now). All through my childhood my family moved frequently. The down side of this was that my education suffered and I was sometimes separated from my patents for long periods. But living in Africa was a young boy's big adventure - climbing trees, finding snakes and scorpions and deadly spiders! I also managed to catch malaria! I remember making a commitment at Boston Baptist Church (where my father was the lay pastor) when I was seven years old and my faith walk has really grown from there."

From an early age Ian had shown a fascination with music. He reminisced, "I have always sung. When I was very young I learnt the violin and was chosen by my violin teacher to play a duet with him at the opening of Boston Music Centre (now the Sam Newsom centre). The duet seemed to go down very well - although I never told anyone that during the course of all my lessons I had never learnt to read a note of music! I always played by ear! (To this day I don't read music - much to the surprise/annoyance of the bands that I play with!) Later, at boarding school in Nigeria, my music teacher heard something in my singing voice and spent many hours giving me vocal coaching, along with a class mate (Kevan Frost, who later went on to play with Boy George and play and produce for Phatfish). It was at this point that I realised that my chief instrument was my voice. In the 1980s - at the height of New Romantic music, I formed a band called Equilibrium with some friends from church. With big hair, clothes that would embarrass my children and pyrotechnics, we performed locally and even appeared at Greenbelt twice."

Despite his pop rock dalliance Ian had an inner desire to lead worship. He recounted, "When I was about 18 I asked God what he wanted me to do. The message I got was 'lead worship'. Since then it has been my desire to take people from an earthly place to a heavenly place through music."

The late '80s were difficult years for Ian. His first marriage ended in divorce and he struggled spiritually. He said, "Although I never lost my faith, for some years I felt abandoned by the Church, that my gifts had been taken away and that I would never lead worship again. I remarried in 1994 and found myself living in Bookham. Realising that I needed to pick up my faith journey I did 'The Grand Tour' of all the churches within a five mile radius and finally settled at Bookham Baptist Church. Under the pastoral guidance of Ian McFarlane, the minister at the time, I understood that the gifts that God had given me had not been taken away and I started to lead worship again.

"Moving forward to 1999/2000, Bookham Baptist Church was sharing services with the Pioneer Church in Leatherhead. After leading worship I was asked by Trish Richards (Noel Richard's wife) whether I had ever recorded. When I said that I hadn't, she suggested that I talk to Caroline Bonnett. So, I emailed Caroline - and never received a reply. I thought that was a pretty clear message that I was barking up the wrong tree! Much later however, I was at another Pioneer meeting and Caroline sat down right in front of me. I prayed for an opportunity to speak to her and God answered. Caroline had never received my email and within weeks we were in a recording studio to see if we could work together. I played her the rough outlines of the songs that would eventually appear on my 'Hope' album and I am still amazed at how she understood me and turned my ideas and (very) rough chord sheets into the songs as they finally appeared. Never give up hope!"

It was to be three years before Ian had the opportunity to record another independent album, 'City Of Refuge'. He spoke about the project, "The title track was born out of a prophetic word spoken over Bookham Baptist Church - that Bookham Baptist Church needed to be at the centre of the community, a refuge for everyone who came through its doors. I asked Caroline Bonnett if she would arrange and produce this second album for me and she very graciously agreed to, picking musicians who suited the tracks perfectly."

The years rolled on and Ian continued in his worship ministry role at Bookham. Finally, in 2010, the singer/songwriter released his third album 'Together'. Ian said ruefully, "That is another album that I never thought would be recorded! I had written the song "Come Let Us Walk" at the request of my then senior pastor Ian McFarlane. Also on the album were, for the first time, some covers written by other people. Once more Caroline agreed to produce me. However, during the recording process, Caroline's sister was tragically killed and everything was put on hold. My album seemed of little importance compared with what Caroline was going through and I didn't want to continue my journey without her. A year later I was talking to Sue Rinaldi and I asked her out of the blue what would happen if I broached the subject of 'Together' with Caroline. Sue said to try it and I did. Shortly afterwards Caroline and I met and we talked about the new album and changing the sound/production of it slightly. I asked my good friend and bass player Matt Watts to help arrange the songs to give them a fresh edge. We would additionally use my vocals on the bv's - something that we had not done before and use a second female voice (Becky Frith) alongside Sue Rinaldi. Caroline also brought in Haran Kotch and playing alongside Stuart Barbour, I think they added a new dimension to the guitar sound." 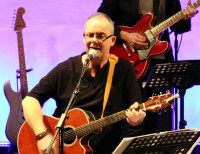 Ian's favourite track on 'Together' is "You Are Love". "It's my favourite not only because it describes God to a 'T', but it also uses as its inspiration one of my favourite hymns - 'A Love That Will Not Let Me Go' by George Mathieson."

Unlike many independent artists who find that recording albums leaves them considerably out of pocket, Ian has so far recouped the costs of each of his albums. He said, "On each occasion the sales of my CDs have covered the production costs. It has been made easier for me by some generous sponsorship from some amazing friends. I am sometimes asked to lead worship at other churches and settings and occasionally I include my own songs."

Ian Ottaway is a man at peace with himself. He observed, "God created us to be human 'beings' and not human 'doings'. Society would have us be busy all the time with little time to simply rest with God. So my biggest lesson comes from the psalmist when he says 'Be still and know that I am God.' Psalm 46."

Until reading this article, I knew absolutely nothing of Ian's biographical past. Yet almost every Sunday, for the last 18 months, my wife and I have attended Ian's congregation at Bookham Baptist Church, and we have both often remarked what a fine singer and unusually uplifting spiritual music-maker he is.