Icon For Hire: The rockers bemused by the Paramore and Evanescence comparisons

Tony Cummings reports on the rock team from Decatur, Illinois, ICON FOR HIRE 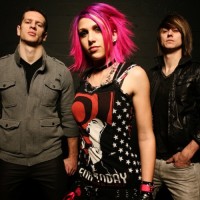 Maybe it's the lack of imagination on the part of rock critics when faced with a female fronted rock band that explains why more than one scribe has compared Icon For Hire with Paramore and Evanescence. Ariel, the singer with the Decatur, Illinois-based band, was asked by Lifewithlisa.blog what makes Icon For Hire different from Paramore and Evanescence. The pink-haired singer responded, "That is a huge, loaded question! The easy answer is that our music has the unique combination of programming/pop elements, mixed with a commercial rock sound. We also have a live show that easily sets us apart, we've never had someone come see us live and compare us to other bands. But the more complicated part of this question is the fact that I hate answering it! I hate having to defend our band, like somehow because we have a female vocalist that we are in the same genre. It sends the message to our female fans that there's no place for them in music, like somehow since 'female singer with rock or pop band' has already been done, that there's no room for creativity or growth within that. It frustrates me how in so many other industries you are acknowledged for your skill and education, but in music somehow if you're a chick you better be bringing something extraordinarily mind-blowing to the table in order to have a shot. It's a bit sexist I think."

Leaving aside the Paramore/Evanescence references the response to Icon For Hire's full length debut 'Scripted' on Tooth & Nail Records has been almost 100 per cent positive. Said Ariel to fuelradio.fm at the time of the album's release in August, "We've been overwhelmed and it's been the most exciting time in my life. The greatest thing so far is these are songs we've been working on for so long and to see the kids identifying with the message we are trying to spread with them is so gratifying. The Facebook messages and emails we've been getting are so rewarding. We've been playing these songs at shows for months, but now that it is finally out there and the great response I couldn't ask for anything more."

The release of 'Scripted' was not without its challenges for the band. "We were in the van all day long when it came out which was very stressful for us. We were communicating on our phone and trying to figure it out, where we were, what people were saying. I'm not sure you've heard about all the pre-orders we did? It was a gruelling task to send all those out. We took a whole day in the basement packing 700 CDs, put notes inside each of them. It was actually a great experience, but I would never do it again (laughs)."

Icon For Hire consists of singer Ariel, guitarist Shawn Jump, bass player Josh Kincheloe (who replaced original bassist Joshua Davis in 2011) and drummer Adam Kronshagen. The band formed in December 2007. Ariel spoke about the band's early days. "None of us had ever been in bands before and none of us knew what we were doing. So we just kind of guessed that 'this is probably how you start a band.' A few months later we played our first show to a packed club in our hometown. It was mostly our friends and family, but since Adam and Shawn had recently been a big part of the local party scene, they still had a ton of friends that came out to see us. We played a terrible show but when it's your friends, you know, they tell you how good you are anyways. Our passion for music was there; whatever we lacked in sound we made up for with enthusiasm."

Soon gigging all over Illinois the band recorded two independent EPs, 'Icon For Hire' in 2008 and 'The Grey EP' in 2009. Ariel spoke about IFH coming to the attention of Christendom's leading rock label Tooth & Nail. "They contacted us in late 2009 via Myspace. They came to a show and I remember we practised our butts off for that show. We were like, 'Oh my gosh, we've got one chance to impress these people'. July of 2010 is when we signed. Again, they have been so fantastic and supportive. I really feel like they are on our side. The most important part is they let us do what we wanted with the music which is more then we could ask for."

Tooth & Nail put Icon For Hire with hitmaking producers Rob Hawkins (I Am Empire, Fireflight) and Aaron Sprinkle (the Almost, Anberlin). It was a successful musical marriage. Said Ariel, "We really liked the work they had done with other bands prior to [our] working with them. We felt like they could bring a lot to our music. In meeting Aaron, he is such a neat guy. He is so genuine and is the real thing. At the same time his work ethic and style is different than ours. I am a nine to five go getter and he is very much artistic and 'let's feel it out and see what happens'. At times it drove us crazy, but at the same time the CD speaks for itself. He knew what he was doing and we are happy with the results. We are so intense and at times are control freaks. The structure I felt like we had a lot of that going in, but he did restructure two songs we had, but they didn't change drastically. What he did do was to really feel the spaces. He was really able to execute our vision. We enjoyed it and it was a good experience.

"We connected with Rob immediately. We co-wrote the song 'Pieces' with him. He is totally the opposite of Aaron. We actually worked with him first. It was probably best to work with him first as it was more of our comfort element. He was like 'let's go, yeah' and that is how we are too. He didn't have that artistic vibe going on that Aaron brings to the table, but I think both of them do work that is excellent and again, their results speak for themselves. Both of them have their own strengths and for us it was cool to work with two producers."

The first single from 'Scripted' is "Make A Move". Said the band's singer, "This song came from my personal struggle with how we as Americans spend our time, money, creativity, and all that. There are amazing, wonderful, precious people in anguish because they don't have access to food. There are bright-eyed, adorable little girls forced to have sex with strangers for 14 hours a day, and are drugged up if they fail to perform. And what do I do with information like that? I shrug, think about how sad it is, and hope that somebody will come along and do something about it. That song brings up the fact that we do so freaking little with all this knowledge. We are selfish. I am selfish."

"Only A Memory" (also known as "Pernilla") is one of the most powerful Icon For Hire songs. Ariel spoke about the song. "I wrote the lyrics for my friends. It just so happened that a lot of them went through some extremely horrific abuses around the same time. 'Only A Memory' is from their perspective and is a reminder that you are not what has been done to you."

On breathecast.christianpost.com Ariel was asked how she became a Christian. "I wish I had something really juicy and dramatic for you, but if I'm honest that's not at all how it went down. I never remember 'getting converted'. I was raised in a Spirit-filled family and was convinced of God's existence the whole time. I'd say a more memorable day was when I finally realized that belonging to Jesus is not a matter of 'Look mom, I'm saved!', but rather 'Wow, I am being saved'. Saying yes to the things of God is more like a path that I choose to keep moving forward on, instead of a switch from one side to the other. I like remembering that I get the chance to die daily, rather then thinking that Jesus is expecting me to just wake up and my flesh is already crucified. It's a much more hopeful way to embrace that God is saving me on a daily basis, there is so much work to be done and he is aware of that."

they only released two albums and i'm waiting on a new to come out. WHEN!!?? it's 2015 now so WHEN!? i love this band and want to hear more from them.

Since this is an old article and old comments, they did release Now You Know and that seems to be their latest track. In case you do not know, it does contain profanity, so if that stuff is not for you in music you listen to, then...yeah. But, if you do not care either way, go on YouTube and search Icon For Hire Now You Know and there ya go

IM SO CONFUSED ive been hearing all these rumors that shawn jump and ariel are married and ARE THEY?! i cant find any pics but that might be because she might have wanted a private wedding (which would make sense) gah so curious!!

This is my favorite band!!!!

i agree with you(: