Ignite 2006: A Review Of The Three-Day Irish Festival

The time had come. The third annual Ignite festival had finally arrived. A load of bands, solo artists and festival-goers from the north to the very southern tip of the emerald isle travelled to this secluded spot in County Meath and no amount of rain was going to spoil the party. But to be fair, it sure did try. 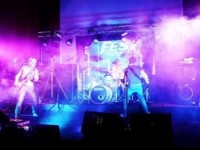 With soggy socks I caught a sight of Belfast rockers Clay packing down just as County Londonderry rock trio [crave] stepped into the main stage spotlight. [crave], to show the pedigree of this band, were the only act on the weekend bill to have played at all three Ignite festivals, even fitting in a few appearances at the Ignite event in the North in between. In fact these guys had only arrived from playing TaraFest the previous night and were flying out to Greenbelt a matter of hours after this set finished. Showing no signs of any possible gig fatigue, they ripped through a collection of tunes from their impressive debut album 'Carve' as well as throwing in a few new numbers to keep their sound fresh whether it needed it or not. The band's onstage presence and energy has noticeably upped a gear over the course of the year. Lead man Scott has always encouraged crowd participation during their live performances even more so now with the new and uplifting "Break", a potential [crave] classic. "Open my eyes to YOUUUHOAW!"

Once the lights from the main event dimmed, the hardcore crunching sounds of Crimson Fight made sure that anyone who contemplated going to bed early had to think again. Returning after a stint in the tent last year, these East Coast screamers from County Antrim put on a show of quality to the gathered few, leaving no doubt that this band have came on leaps and bounds since their Southern debut last August. With tightened musicianship the bands sound is more 'on target' these days. Standing out from the double distortion and roaring vocals was the track "All The Way" which epitomises the bands energy and youthfulness, a track from the bands soon to be released independent EP.

It was then down to Aaron Ferris to bring the first night of Ignitefest 06 to a close. Those who congregated in the tent may have been expecting a chilled out, laid back acoustic set, but what was clear from the start was that Aaron is not your typical 'acoustic' artist. The spectacular thing about Aaron is how he conveys true guts and passion akin to any 'plugged in' band, but with only one guitar and one voice. His playing style is unique, from the fast-paced "180" right down to the quiet and reflective "Heaven Awaits", nothing is held back vocally. Tonight Aaron performed what was easily one of the most memorable sets of the festival.

After the disappointment that followed my realisation that I'd missed the entire Clay set on Friday night due to pitching tents and partaking in headers and volleys, there was no chance their second set in the side tent would go unreported. The mix in the side tent was crystal clear, a standard that wouldn't falter during the course of the weekend. The professionalism of Clay is continually evident regardless of venue, and this shone through on Saturday afternoon. James Adamson, Clay's charismatic front man, really drives the band on through their rockier numbers. There is an underlying rhythm to Clay that makes the music so appealing. Solid drumming and masterful bass work form a reliable rhythm section laying a strong foundation to their big sound. The true test comes when the electrics are set aside and Jamesy does so producing an acoustic to wind the set down, a poignant end. It is a common tragedy that when a Christian band gets a taste of success and a expanding fan base, they compromise in their lyrics and their original goal of explicitly sharing the Gospel with listeners. It is therefore a great encouragement to see a band like Clay, with experience and warranted popularity, still totally uncompromising in their ministry.

Next up on the programme, a sobering and thought-provoking seminar focussing on the persecuted church presented by a representative of Open Doors. No dramatics, no pleas for money, just accounts of what our brothers and sisters endure for their faith in Christ around the world. Hard hitting stuff.

The afternoon would adopt an acoustic slant with Cork's Joseph O'Donovan strumming his trusty acoustic in the side tent to be followed soon after by the acoustic/electric/harmonica playing Rick McKee from the outskirts of Belfast. Using his humour to good affect, Joseph entertained the afternoon crowd with sharp wit and intelligent guitar fretwork. Josephs recently released EP 'Three Stage Test' is worth a few of your hard earned pounds.

Rick McKee's past experience playing in a full rock outfit has made a firm impression on his frank and open solo material. Crafting a unique sound through his rhythmic guitar work is made even better with the beautiful tone he achieves. His vocal style is also worthy of note. Preferring to sing in his own Comber accent as opposed to the USA/English tinge that many artists favour, Rick gives his songs a strange familiarity to the listener. It's the kind of familiarity that makes you want to hear them over and over again. It is compelling music that is often hard to categorise, but this works entirely in Rick's favour.

The longest travel award (if there was one that is) went to self-styled alt-rockers Freeslave. Hailing from the south coast of England, little knew what to expect from Haydon Spenceley and his accompanying musicians who were unknown to the vast majority of festival attendees. While I struggled to pinpoint much lyrically due to the echo chamber that was the sports hall, the guys musically were good with strong persuasions to that oh so familiar Coldplay sound. Freeslave's "The Road Less Travelled" especially grabbed my attention, a catchy hook line delivered by the wheelchair-bound Haydon who was clearly enjoying his first time in Ireland.

The other half of Saturday evening's main stage entertainment came in the form of Down To Earth. Five guys and a girl from the Ballymena district put on an energetic mix of originals and covers with accompanying lyrics and images displayed on the stage screen. Leading from the front was the vocal talent of leading lady Dawn, never missing a note throughout the show. A solid band who clearly enjoy what they do, evident with their ever animated rhythm guitarist. With an EP on its way and youth on their side, this group have the potential for many fruitful years ahead.

Saturday's programme would draw to a close in the side tent with the Dublin based Jill Deering accompanied by her friend Chris. What does Jill sound like? Well for starters she's good, very good actually. Think of the delicate and subtle tones of Kendall Payne fused with the power of Kate Miner and you start to get the picture. Not only that, she's handy on the old six string too. Supplemented by Chris twiddling high up the fret board, producing some splendid delay and effect work, his playing adds an extra dimension to the duo's overall sound. For a touch of familiarity Jill impeccably recited Pink's "Who Knew" as Chris downed the electric and donned the acoustic for a few numbers. As the final chord of the night sounded, all who had gathered in the side venue could go to our sleeping bags musically satisfied.

This years in house worship crew came in the form of The Epiphony Project from Open Arms Fellowship in Kildare. Lead man Nathan was no stranger to the Ignite experience after playing bass in last years worship troop. Throughout the course of the weekend the guys never lost sight that they were there to serve and lead people into Gods presence, a perspective that is often lost in some worship groups today. Spirit led worship relayed by humble willing vessels.

Main speaker for the course of the weekend Robert Hunsdale (Agape Fellowship, Belfast) presented a range of inspiring messages throughout the three days. Wrapping up Ignitefest 06, Robert challenged and provoked the heart of the youngest to the eldest. "God doesn't want your wallet or your talents, he wants your heart. Once he has that he has everything else anyway." With that the curtain came down on Ignites third south of the border outing.

Having attended and experienced a wide range of Christian festivals, this one has to rank near the top for fellowship and the general good feeling that encompasses it. The ticket sales will probably never get within touching distance of the likes of Summer Madness or Soul Survivor but I get the feeling that Ignite wouldn't be Ignite if it did. If you do get the chance to attend Ignite next year, I'm sure you'll be blessed.

the Ignite festival I attended was very good.