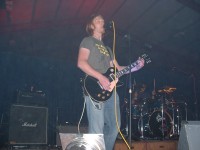 Ignite, founded by Chris 'Chipper' Ferris in 1999, started off as a small youth meeting for teens and 20s consisting of cell groups and the hosting of band nights in a small church in County Antrim. Five years later in 2004, Ignite crossed over the border to host a successful weekend of music in Drewstown House, Co Meath. August 2005 hosted the second annual Ignite festival and what a weekend it turned out to be for the spiritual and musical soul.

The festival kicked off with the energetic and explosive sounds of Northern Ireland's Do Not Adjust. These are three young guys who clearly have a passion for what they sing. They stressed that they're not emo and it is hard to categorise this trio but they sure do rock and are focussed on serving God. I wouldn't be surprised to see these guys go on to greater things. The mighty [crave] followed up with an electrifying set, somewhat of a trademark for this exciting band that have recently enjoyed deserved airplay with their full length debut album 'Carve', which is currently being distributed by ICC/Elevation. The band's love for God made them very encouraging.

Friday night ended with what was billed as The ZeroAirPlay Showcase. Dave Emo, founder of www.zeroairplay.co.uk, travelled over from Scotland to this remote spot in the Irish countryside and hosted this night of alternative music. This nocturnal affair comprised of the hardcore sounds of Crimson Fight who's set preceded the wacky and zany Scottish boys known as The Voice Of The Mysterons (VOTM). Crimson Fight are a hard hitting four piece band, one of a new wave of acts to come out of the vibrant Northern Irish Christian scene and these guys have energy galore. Raw passion, duel guitars and crashing cymbals are all part and parcel of what this band offers. VOTM were somewhat unfamiliar to the majority of festival goers but that didn't stop a sizeable crowd turning out to witness the Scottish four piece dart through a collection of their uniquely branded numbers, that was before a power cut abruptly called an end to the nights proceedings. 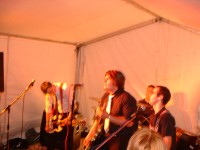 The sun rose on Saturday morning to be greeted shortly after by the sounds of worship led by Dublin's Joey Von Meding and band. The main speaker of the weekend, Campbell Archer, followed, presenting a message that focused on embarrassment and the "what ifs" of Christianity among other thought provoking topics.

The youngest performers of the weekend came in the shape of Against The Grain, who opened up Saturday afternoon's affairs with their south of the border debut. Loud guitars and gutsy vocals filled the air as this band ripped through their punk-edged set. A bit of free time followed allowing the festival goers to mingle and enjoy a spot of football, volleyball or just simply take in the beautiful surroundings Drewstown House has to offer. Saturday afternoon proved to be a more relaxed affair with an acoustic session billed as Aaron & Sparky, but with the latter unable to attend, Aaron fired ahead alone with a set of original acoustic compositions. An impromptu open-mic session followed, just before everyone headed for some much needed food.

Just before the main meeting kicked off in the main sports hall, Crimson Fight played their second set of the weekend in the side tent. A more intimate affair this time round nevertheless everyone's eardrums still took a good battering from this lively quartet. Shortly after, it was time for the main event of the weekend. Northern Ireland funksters Numinous travelled down after playing a gig nearer to home earlier in the day, however the night was to kick off with the acoustic rock sounds of Mia. Unlike most of the other acts over the weekend, Mia wasn't one I was familiar with but as soon as the first chord was struck, we all knew we were in for something special. Accompanied by her band, Mia put on a great show delivering strong vocals and rocking tunes, which kept the audience attentive throughout. What followed was truly a treat for everyone who witnessed it. Numinous have only been around the music scene for a few years but that was not evident during their main stage performance on Saturday. A recent addition of a second guitarist has given this band a fuller sound and has only added to what is one of the tightest and funkiest Christian acts that Northern Ireland has produced in recent years. The lead singer encourages crowd interaction and shares the reasoning and spiritual meanings behind each song as the band rock through each tune like their lives depend on it. The evening event was wrapped up nicely with a talk by Ignite founder Chipper, presenting a message entitled The Lord Who Sustains You. 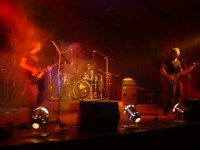 Saturday would end just as Friday night started, with Do Not Adjust belting through a collection their tasty (not emo!) material, showing musical maturity way beyond their years. A stand out track for me was the thought provoking "We've Only Scratched The Surface", which was introduced as a song on prayer. "Ask for it all, my God will answer," was the singer's cry as heads bopped along to the catchy hooks.

A morning of prayer and worship marked the end of a hugely successful weekend in terms of God moving, His power so clear to be seen. Thanks must to the hard work of the Ignite team and to all the bands who came and made the effort and made this weekend one to remember.

Aaron, thanks for the wee plug for Zero Airplay, much appreciated! It really was a great weekend, not one to be forgotten easily! Keep up the good work, catch ya later - emo x

Some nice memories brought back there. Cheers for your kind comments on CF. It truly means an awful lot. I had a good weekend, and I hope everyone else did. (Even those not familiar with Christian Alternative etc)