In Tune With Heaven: Looking at the Church Of England report on music

The publication of the Church of England report on music attracted a blaze of publicity. But what did IN TUNE WITH HEAVEN say? Tony Cummings has read it. 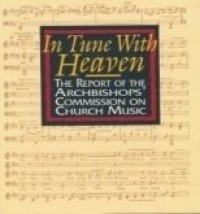 When I was first asked by one of the Synod committee preparing The Report Of The Archbishop's Commission On Church Music whether I'd agree to be interviewed for the Report I was astonished. In one short phone call all my fondly held prejudices were shattered. For most of us the phrase Synod Committee conjures-up depressing pictures of dusty, ecclesiastical irrelevancy or off-the-wall utterances from theologically liberal pressure groups.

But amazingly here was a committee seemingly prepared to listen to the views of evangelicals - and ones involved in pop and rock music at that. I subsequently learnt that the committee included such staunchly evangelical figures as Noel Tredinnick, professor at London's Guildhall of Music and much loved as conductor of the All Souls Orchestra and Choir; and the Rt Rev Timothy Bavin, Bishop of Portsmouth.

When the Committee's Report 'In Tune With Heaven' was finally published in May it attracted a furore of controversy. "Archbishop goes pop," "Acid house Carey" and a dozen more over-the-top newspaper headlines showed that the Report's observation that "the fact that the subject of music in worship arouses widespread interest and evokes a strong response in many people" was only too true.

The section of the Report which had the tabloids reaching for their manuals of Shock Horror Headlines were the comments like "God can reveal something of himself in many styles of music, whether it be Mozart or the Beatles." At the press meeting called to launch the Report, Dr George Carey, Archbishop of Canterbury, said "There is room for contemporary songs and musical experiments in God's service and worship." Such tasty titbits brought the media interest, which in turn unleashed a shoal of letters and articles from shocked churchgoers horrified at the supposed imminent prospect of heavy metal bands and acid house ravers taking over evensong.

In fact, of course, contemporary music forms were only a very small part of the Report's recommendations, and 'In Tune With Heaven', far from being the work of motor biking-clergy radicals or eye-rolling charismaniacs was largely concerned with issues far removed from Graham Kendrick songs let alone NOS-style worship raves. The report gives recommendations to numerous parties. Concentrating on the recommendations to the church at all levels "Care:-

No one reading the report could believe the angry media accusations, particularly from Tory newspapers, that 'In Tune With Haven was compiled by trendy iconoclasts keen to trample the beautiful traditions of plainsong and carols, Watts and Wesley underfoot to put Stock, Aitken And Waterman (with hallelujahs) in their place. The hysterical reaction to the report says more about the survival of a stained-glass window folk-religion, even among tabloid hacks, than it does about the genuine fears and concerns of committed Christians within the Church of England.

Because musical creativity is so closely linked with other operations of the Holy Spirit there is absolutely no way that the church can stay forever a receptacle for fossilised art forms. The Holy Spirit is continually moving on and creating something new. Those who follow him will be the receptacle for expressing those new things. If the church structures won't let them they will find new church structures. This is fact, not cheap house church propaganda. For there is a huge amount of musical creativity and spiritual reality within the Church of England. The danger with the new is that it wants to destroy the old. The arrogance of youth sneering at the "rubbishy old hymns" should not be given too much credence. Let's have rave praise in the cathedrals. But let's not throw out Taverner or Taize. air of what is more impressive about the report is that despite its compilers fuddy-duddy cultural isolation (it can hardly resist putting "pop" music in inverted commas). 'In Tune With Heaven' has many insights and much to guide those who wish to implement its recommendations, though the committee who compiled it would be totally at sea at a Scott Blackwell worship rave or a Bloodgood evangelistic concert, they seemingly, to a man, recognise that radical change in the Church of England is absolutely inevitable. In fact, of course, they've already begun.

Sadly, there will always be clergy and congregations who resist that change, confusing that which is cultural and gyerjeed with that which is doctrinal and eternal. Such stubborn refusal to try new things in music when there is a demand and a need from within their flock will undoubtedly drive some away from the Church of England and, tragically, from the Church. Let us pray that the staunch reactionaries come eventually to recognise that their 'Hymns Ancient And Modern' isn't some sacred appendage of Holy Scripture but the Hosanna! Music Songbook of its day (1861). Hymns Ancient And Modern (and all the other hymnals.

Thomas Helmore plainsong; or the strummed guitar composition of a Chris Bowater; all art good or vack ('good' or 'bad' the appendage is entirely subjective) and like all human creativity and contain within their words and music the ability to myteria bridge the finite and the infinite. I sense that the compilers of 'In Tune With Heaven' acknowledge this and are gently trying to lead the flock to the same realisation.

One of the most intriguing outcomes of the explosion of media pomposity towards 'In Tune With Heaven' was a three-quarter of a page article in the Daily Telegraph entitled 'Can God Rock Be Good Rock?'

It was intriguing for several reasons. Firstly, though it used 'In Tune With Heaven' to flag down its readers, the main area of attack was contemporary Christian music. This was surprising in view of the fact that In Tune With Heaven makes only passing reference to CCM (two pages). Secondly, the writer of 'Can God Rock Be Good Rock?' was not penned by some Telegraph hack nostalgically recalling the smell of incense in his Song gone youth. Neither was it written by a straight-laced churchman with a particular axe to grind. For the Telegraph wheeled in a rock writer and one with impeccable street cred. Tony Banks was once married to Julie Burchill and together the journalists were key movers and shakers in the punk rock movement. "Rock critic Tony Parsons, a regular churchgoer, thinks raves in the pews are bad news for God and music" read the byline.

The research was pretty flaky ("U2 and prince some of pop's greatest practitioners used to be Christians", there are five Christian record companies in this country", 'heavy metal - sometimes known as 'heavens metal' or 'heavenly metal'", etc etc}. But that's standard for quality written newspaper pieces. What is most intriguing is that Mr Parson's chief objection was the poor artiste quality of CCM music. The fact that his total experience of CCM was five albums, plus one Heaven's Metal and one Alpha (what, no Cross Rhythms?) that he'd bought from Duel Edge didn't shake Tony's artistry. "All these rocking soldiers make me cringe. Like watching your trendiest uncle get up to disco dance. It is embarrassing and out of place. The wrong thing done badly... If I want second rate rock music then I will go to a Genesis concert.'

Lashed in Tony Parsons diatribe is Metal Meltdown, Trish Morgan (writer of the rather pretty chorus "Jesus I Love You" and just about everything connected with both contemporary Christian music and praise and worship. What should Christians make of Mr Parson's full-blooded attack. We can agree or disagree with specific artistic criticisms (I'd agree with him that 'Ultimate Meta! is a dated dud, but to call Charlie Peacock "a Simply Red imitator" shows a pretty severe lack of critical nounce). We can resist Mr Bank's profoundly unbiblical theology. Though he says "it is wrong to tear down the walls between the church and the secular world" he writes. And we can rejoice that unwittingly, Mr Parsons is doing a PR job for Christian music ministry. He writes: Christianity and rock have not just looked into each other's eyes. They are involved in a long term relationship and have been for some time." Thanks to Mr Parsons, the mass media is becoming aware of this relationship. The week after we go to press Cross Rhythms are being interviewed on BBC Radio 1's 'Newsbeat' programme. What was their sudden interest in contemporary Christian music and Cross Rhythms? A certain article by Tony Parsons.

A Synod Report... an article in The Telegraph... an interview on national radio news. Yep, God works in all things...