One of the brightest new names to emerge from the Scottish scene in recent years are Edinburgh's INDIGOECHO. Mike Rimmer quizzed two of the band members. 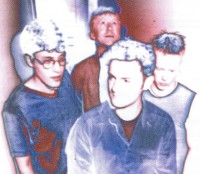 As the Clive Parnell Band, Edinburgh musicianaries Indigoecho built up a grassroots following. Now the team have honed their sound, signed to bright independent Room 3 Records and have weighed in with such a strong album debut 'One' that it's caught the ear of mainstream record chains like Our Price. I spoke to the band's Clive Parnell (vocals, guitars) and Andy Weir (drums, guitars) about the band's intriguing past and exciting present.

Mike: How come you've got a name that's so difficult to say?

Andy: "We thought what name could we have that would really mess up DJs (particularly Mike Rimmer)? So we thought Indigoecho. Actually, we're not entirely sure why we called it Indigoecho and it would be really pretentious to come up with a spiritual answer. Our lead guitarist Rik Brown explains it as, 'a big blue thing in a cave,' which is totally bizarre, but then he's a student. What more can we say?"

Tell me about your support of the Jubilee 2000 when it's been up in Scotland.

Clive: "That came about through my involvement in Jubilee 2000.1 was on this committee and they were trying to get really big bands to play, a bit like what happened at Net Aid with Robbie Williams and Bono and those sorts of people. A local radio station was involved in organising it and it just didn't come off at all. There was a lot of 'Oh! It's gonna happen, it's gonna happen,' but it didn't happen. I suggested maybe putting on more of a youth event and involving Nervous Passenger and ourselves and it worked out really well. We played a theatre called Traverse Theatre and we had young people from all over Scotland come to it. It was a multi-media event. That was a really positive experience about putting Christian music into the heart of something, standing up against world debt and asking the governments to drop the debt. We've still got a really good relationship with them. I think a lot of bands are saying, 'Okay, we supported Jubilee 2000, but what are indighoecho trying to do?', and in a way it's part of our Trust is to take that initiative and say 'We're here to resource what you're doing as well.' When we launch the CD in association with Jubilee 2000 we're gonna make sure that people get the address on the CD. We're gonna endorse them."

Mike: There are several outstanding songs on the 'One' album. Tell me about the song "Colours".

"That's one of the older songs but it doesn't show, I hope. 'Colours' comes out of our heritage of basically challenging people's perspectives. The chorus line is, 'If you think you're so very right, then add a bit of colour to your life.' It's encouraging people to not sit back and say, 'Well! I've got this far - it'll do.' It's like, 'If it's so black and white and you're so right then add a bit of colour.' I think what it's dealing with is that when it's not black and white we talk about greys as some kind of negative thing, that if you're doubting in some way or struggling with things it's a grey issue. Actually I think grey times can be more than that. Because often it's the areas that are not black and white in our lives which actually produce character and colour and vigour. It's actually about embracing those moments rather than saying, 'Oh! Grey moments, umm! Terrible, woe is me!' sort of stuff."

Mike: What's the story behind the song "Why"?

"This is another slightly older song that we've been working on for some time. As blokes we're very slow to express emotion. We tend to bottle things up. I think spiritually as well we can be slow to express what we're about, men or women, that's a cultural thing. I think this song is really saying, 'Okay, there are problems in life that happen and also injustice that happens in the world and that people are being crippled by debt and crippled by the fact that dictators are beating them up and shoving them in prisons. As Christians why is it that we don't cry and have compassion? Why is it that we don't stand up against injustice? Why are we more interested in doing up our kitchens than actually getting out and making a stand for what Jesus is about?' He's about bringing Good News to the poor. The song "Why" is totally about saying, let's get off our butts and make a difference, we're Christians and we're bringing Good News.' It's about doing something rather than just talking about it."

Clive: "We do like to give people something that when they leave they can say, 'That was great, I really enjoyed myself,' not just because we made people feel good but because we lifted people up. If they came in feeling a bit low, and we've encouraged at the close we've achieved something. We try and give people an opportunity to jump about and get hot and sweaty and then also a chance to cool down, enjoy some more reflective stuff. The importance of what we're doing at a gig as well is, hopefully, to catch something. It's almost like subliminal worship. We're not going out there and saying, 'Okay everybody, we're gonna sing a chorus and I've got a sandwich board on saying Jesus Loves You.' But actually when we go out there we're worshipping and we want people to sense that. If people are Christians and they are tuned into what God's about then they'll be blessed by that. If people aren't Christians then the Holy Spirit can move and touch people's lives. Rik our guitarist, who's Mr Energetic, jumps up and down all over the place. But there are reflective moments and acoustic stuff where people can hopefully hear God's voice through what we're doing. So much of that is about where we're at and if we're living the life. It's very easy to go out there and say, 'Get off the drugs kids and Jesus loves you,' and then be living a totally different lifestyle. We find the hardest bit is living the life when on a Tuesday morning you have bills to pay or whatever."

Mike: There is a bit of a scene developing in Scotland with a number of good bands.

Andy: "There's a lot of talent kicking about. We did a festival earlier on this year, Crossover, and that had a load of bands at it from all over the place. You've got the old folk rockers the Electrics and then you've got people like MID, quite a young band, Superhero who are not necessarily a young band, doing big moves and going full time. There're a lot of people around so if we can be involved in bringing people together, great. There wasn't the chance, at Crossover for people to chat and mill about as bands get to know each other. But we're hoping that through the work that we're doing with Room 3 and with our Trust, we can maybe start to get people pulling in the same direction."