On 19th June, 700 gathered in the Rivermead Leisure Centre, Reading to experience a unique Christian music event, JAM '93. Catherine Francis went along to the 'other' Reading festival. 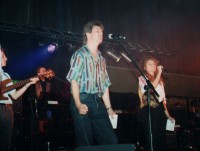 The crowds cheer as another hard-rocking band leaps on to the stage. The guitarist throws himself into a funky God-inspired number and the audience erupt in applause.

The throng in which I am standing enjoying the spectacle aren't in a sun-baked field at one of Christendom's fests. And the band I, and the enthusiastic crowd, am enjoying aren't some high-profile team of rock gospellers toting a Nelson Word contract and with a team of roadies and supporters in tow. They are one of a stream of 'unknowns' who have gathered for a unique annual event. JAM (Jesus And Music) is a showcase for grassroots Christian music. At JAM, bands from the Reading area gather to play music in a dazzling variety of styles: indie rock and chorale, heavy metal and black gospel, their shared platform a more eloquent proclamation of togetherness in the Body than any number of sermons on church unity. Over the roar of the rock band I ask founder and coordinator of JAM, Hadyn Wood to explain the thinking behind the event. "The vision is to create an event which will break down barriers and build bridges between churches, focusing on the things they have in common and promoting unity rather than division, hence the title Jesus And Music."

The half-day festival was first held in 1990, drawing 300 people to St Mary's Church in Reading. This year, over 700 are in the Rivermead Leisure Centre to hear the latest talent that Reading churches have to offer. The audience is drawn from a wide cross section of ages and backgrounds, from trendy house churches and the local University Christian Union to more traditional Church of England and Roman Catholic churches. The festival is a positive move to unite these local churches in a practical way.

In four short years the JAM festival has become the high point of the Christian entertainment calendar in Reading. It has always included a wide variety of musical styles to appeal to different tastes, with performers drawn from churches of all denominations in the Reading area and this year is no exception. The standard of the bands is undeniably high. This year the overall style is definitely more rock orientated than in previous JAMs, but with 10 different acts, each playing a short set of three songs, there is still something for everyone. 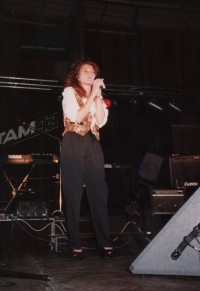 After a time of worship led by a team of musicians from various churches, the evening opens with the six-piece rock group, Water Colour Mourning, who are well known on the Reading circuit. Their rousing mini-set is greeted with immediate enthusiasm, the smoke machines and live video screens adding to the atmosphere. This is the second time Water Colour Mourning have played at JAM. "We play a lot of local pubs and clubs but JAM is quite different," says vocalist Mark Payne, who has also been involved in organising the festival from the beginning. "It's quite difficult to open an event like this with a bang, while remembering that the mixture of different tastes in the audience means some people may not enjoy a loud rock band." Water Colour Mourning has already made two self-financed albums, but while they welcome the chance to play to larger audiences Mark feels that the emphasis on small local bands is JAM'S winning formula. "There can be a danger in getting too big. We don't want to frighten off the smaller bands," Mark says.

Restored Sanity is one of those little known bands who are new to the festival this year. They are the youngest band to perform at JAM '93, with the oldest member only 21 years old. Their laid-back funky rock style and tight performance makes it difficult to believe that the band had been formed just two months before the event, and are performing their only three numbers for the first time. The band comprises ex-members of Indigo Violets, popular at JAM '92, and animated vocalist, Stuart Slack, performing to a large audience for the first time. "I felt it went really well, and was amazed by how the audience reacted to us," says Stuart. Bassist Steve Cowley hopes that JAM will lead to further bookings for the band who are now working on a set. "It's great to play to this kind of audience," says Steve, "and JAM does not only attract Christians, so it gives non-Christians a chance to hear the message too."

For those with more classical tastes, the Trinity Band are an ensemble centred around woodwind and strings, comprising people from the age of nine to senior citizens. For the folkies in the audience, JAM presents Andrew Waugh next: one man, one guitar and three acoustic numbers including a very amusing denominational version of "Let's Do It" ("Charismatics from the chandeliers do it!"). Mixing so many different styles can be a difficult challenge, but somehow JAM manages it. Christians of different backgrounds, ages and tastes are brought together for an all-family event - perhaps most appealing to the younger members of the audience, who can't be held back from dancing down at the front, but enjoyed by all.

Musical performances are interspersed with comedy drama sketches by Streetlights, an evangelistic team from the Bahamas who arrived in Britain just one day before the event and launched a surprise appearance. The team's performance of an infectious rap number adds to the delight and loud approval of the crowd. 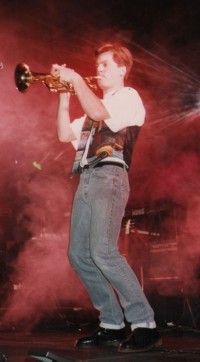 Light Incorporated return to JAM by popular demand. The jazz-rock group have been together for 18 months and played at last year's festival. Vocalist Martyn Strong comments, "It's very difficult for Christian bands to get any financial backing which is why something like JAM is so important. We normally play to youth groups and churches. For us as a band, if an audience is good, then numbers don't really matter -it could be 70, 700 or 1700 - but JAM does have a special atmosphere. It is a high point for churches in Reading because it encompasses something for everybody. It is also a good stepping stone for other gigs."

The evening is not without some ministry.

Lamane, a duo comprising the crystal voiced ex-Funky Beehive vocalist Tanya Langdon and the sensitive work of synth guitarist Kevin Kerrigen, lead the audience into a time of meditation and stillness with two ambient numbers. "We feel that God is telling us this isn't just an opportunity to sing songs," Tanya tells the audience. "God wants to meet some needs this evening. Reach out to him if you want to receive." A long moment of peace spreads through the audience as people centre their thoughts on God. I for one, am blessed.

For a lot of people the climax of the evening comes with the superb Reading Community Gospel Choir who are playing at JAM for the first time. The reception to their powerful and uplifting set is riotous, and the audience are loath to let them leave the stage. Beverly Shea, who has been singing for the gospel choir for three and a half of its four years, believes that events like JAM can be evangelistic. "A lot of people are scared of church - but they come to an event like this and find they can relate to something in the songs," explains Beverly. The choir go on to lead some lively worship at the end of the evening. 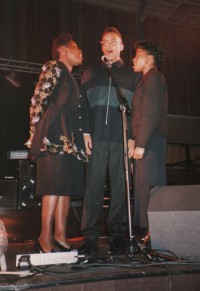 For organiser Hadyn Wood, all the hard work of the last few months has been worth it. "This year's JAM is easily the best yet, both in terms of performance and atmosphere. When JAM first started, everyone was more tense because we didn't know if it was going to work and for the bands participating it was so much bigger than anything before. This year it is a lot more relaxed. The bands are thoroughly enjoying it and the audience's response is very positive."

The proceeds from JAM'S charity theme single "Bridge The Gap", performed on the night in a Band-Aid style line-up, will be donated to Lifeline, a local counselling service for women who are pregnant or have had abortions, run by trained counsellors from churches all around Reading. The money will help the project to set up a house for women who choose to keep their babies.

JAM is an exciting demonstration of the growing unity between different denominations, and proof of the startling amount of talent to come out of Reading's churches. For Christians and music lovers, JAM festival goes from strength to strength. Roll on JAM '94!