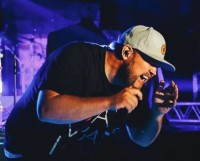 The JJ Weeks Band, from Macon, Georgia, were one of Christian music's great treasures. With a gutsy Southern rock style and featuring one of the great, if underrated, singers in the whole of modern Christian music, the ministry veterans had toiled tirelessly since their foundation in 2001. In 2013 they were finally signed to a major Christian label and their 'All Over The World' for Inpop Records produced two Cross Rhythms radio hits in "Save Us" and "Flood Down". Three years later they were signed to Centricity Music and their album 'As Long As We Can Breathe' received a 4.3 star review on The Christian Beat website, calling it "encouraging, inspiring, joyful and powerful", with the set making 44 on Billboard's Christian Albums chart.

But things weren't going too well for the road-hardened band and in 2018 the band members went their separate ways. In an interview with Timothy Yup on the Hallels website, JJ Weeks spoke candidly about his experiences. "2018 was an incredibly tough year. Like one thing after another going wrong. Finances, cancer in my family, death in my family, struggle after struggle and after a bus wreck, I quit doing music and said I was through. Walked away from 17 years of singing on stage after stage and proclaiming Jesus but living the last year feeling like he was nowhere to be found. After getting the bus home I laid down in bed that night and prayed to God, 'Thank you for 17 years of ministry and using me. Now help me to end this ministry well.' I will never claim to have heard the audible voice of God, but it was as close as I had heard it that night. I heard him say, 'You may be through son, but I'm not!' What a reminder that was that he has been there through it all and he can turn it all around!!"

After releasing two independent Christmas singles in November 2018, the veteran signed with Radiate Music, the label set up by award-winning record producer Ian Eskelin. JJ Weeks' first single for the company, "Days Like These", was followed by the single "Choices", until on 7th February 2020 JJ's critically acclaimed EP, 'The Sound Of Freedom', was issued.

Speaking to Timothy Yup, JJ was asked how it felt making his solo debut. He said, "It was a little different. Kind of felt like I went back to the way I used to write. Back to when I just wrote what was on my heart. A lot of times in the industry you feel pressured to write for radio or for a certain sound. Was super nice to just write what the Lord gives me."

When asked what was the most challenging song to write on 'The Sound Of Freedom', JJ immediately named "Days Like These". He said, "It is always hard to put into words when life is tough. To define the frustration of feeling like God is nowhere to be found but also knowing that he is there, and he is trustworthy to walk us through each and every valley! That is always tough to put into words."

Another powerful song on the project, one which Yup called "raw and dripping with emotion", is "Here With Me". JJ explained the genesis of that song. "I brought the idea of this chorus to a couple writers and it really hit home with one of them. He had just walked through a battle of cancer with his wife and he could remember sitting bedside in that hospital asking the question, am I all alone? In the same thought he can remember feeling like God was sitting right beside them through it all. So though we have questions, we also have this confidence that we know in our heart that he is right there through it all."