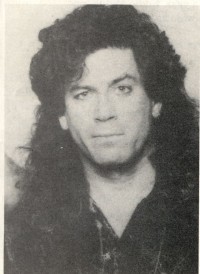 With Christian music albums arriving from America by the container-load it would be easy for the music buff to miss the flecks of creative gold in the dross of production-line CCM. So it's hardly surprising that the name Jag does not as yet instil rush-out-and-buy mania in British evangelicalism. In fact, the band's last album 'The Longest Road', despite a five star Cross Rhythms review, sold so badly on this side of the pond that Word (UK) very nearly passed on the band's newie 'The Only World In Town'. In fact, it is an exceptional album of AOR-styled rock having both the fire and guts of the best of, say, White Heart (in fact it is White Heart's Billy Smiley who produced both Jag albums mentioned) yet containing a clarity of spiritual vision and maturity from the band's front man/composer which is seldom heard in formula-plagued AOR.

That frontman is the source of Jag's unusual moniker. "I was born John Allen Garies," the singer/composer/drummer told Cross Rhythms in a Texan drawl strong enough to shine the buckle of the Bible Belt, "and when I started singing Christian music I reckoned using two names was what you do - Steven Curtis Chapman and all that. So I was doing these gigs with a band called Sacred Fire. We toured for about a year with Mylon LeFevre. But as I got introduced as John Allen Garies people began to call me 'Jag'. The name stuck, so when I started the band, they became Jag too."

John/Jag certainly didn't cut his teeth in the insular CCM scene. Before becoming a Christian in 1979 the musician made his living "playing bars as a drummer/vocalist in Texas doing blues-based 22 Top, Johnny Winter and Zeppelin." In 1986 Garies released his first independently recorded album, an effort he insists is now best forgotten. But it did open a door for him. "Billy Smiley heard one of the songs on the tape called 'Shake It Off' and reckoned it had something he wasn't hearing elsewhere."

Garies and Smiley joined forces and an album emerged, 'The Longest Road'. It was released on Britain's own Wave Records, but with limited distribution got rather lost. It deserved a better fate. Writing in Cross Rhythms, reviewer Mark Falla summed it up. "Jag's voice is a joy on the lines of a rehabilitated Joe Cocker. When supported by intelligent production from Billy Smiley, the sound is ethereal and haunting."

Ethereal and haunting maybe, but not exactly bristling with US Christian radio appeal. When Wind Records transferred their two artists Jag and Christian music veteran Randy Matthews to the CCM giant Benson Records, a slightly more commercial approach was taken by Smiley on Jag's 'The Only World In Town' Benson debut. It's worked brilliantly. The album exudes AOR immediacy, crying out for rock/pop exposure (catch the anthemic chorus on "Hands Up In The Air" or the hey-na-na-na-na girl chorus on "What God's Love Means"). But it isn't all catchy hooks with nothing hanging on them. "Hands Up In The Air" isn't (thank goodness) an exhortation for charismatic praise but explores the same theme of the man out in the ocean not waving, but drowning, that Steve Butler did years ago on " Waving And Drowning"; "The Last Time I Looked" deftly explores that inside, all humanity is the same; and "The Only World In Town" vividly portrays a world of which we are all part, falling into anarchy because we seek the "human solution". The emotive lyrics bite hard. "Work for today to fill up our pockets/ And sleep like a baby at night/It's changing our children they say it's the new way/But wrong has now faded to be right."

The idea for the song "The Only World In Town" came from John's eight-year-old daughter. "We were driving along and I was sounding off about the phone company, saying 'they were the only game in town'. Then my daughter, who was in the back of the car, pipes up. 'Hey papa, this is the only world in town.' Out of the mouths of babes and sucklings I guess - I knew I had to write that down as soon as she said it. The song looks at the way we're wrecking and raping this world of ours. But it doesn't cop out with the John Lennon 'let's give peace a chance'. It speaks about the 'source' of all the world's problems, about how, until we get our hearts changed, the world won't change."

For the last year Jag, now a permanent line up of John Garies (vocals - he's dropped the drums), J Paul Brittain (guitars), Michael Lusk (bass) and Chuck Connor (drums), have been touring America's CCM circuit as support act for White Heart. They have been drawing an ever-increasing band of supporters both for their high-octane rock and the exceptional lucidity and intelligence of their material. They're about to start work on their next album for Benson. One song on it Garies has composed is called "Fire In The Temple". Says this passionate singer of rock gospel: "Its lyric deals with the church wakening up to the religious hucksters out there. It has also grown out of an awakening I've been experiencing in my life, the consciousness of God's grace. We can get so hung up doin' church things. But when all is said and done, it's God who's doing the building."