Jared Anderson: The worship leader who is a passionate advocate for adoption 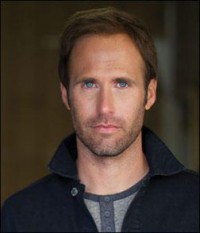 When Cross Rhythms last wrote about Jared Anderson in 2007, our radio stations were playing his haunting "I'm Coming Your Way", which, to us, sounded a bit like a cross between Rufus Wainwright and Ben Folds. A lot has happened to the former founding member of Desperation Band since then, and now the songwriter behind such anthems as "Great I Am", "Amazed" and "Rescue" has returned with 'The Whole Landscape', a five-song meditation on aspects of God's healing and restoration.

Said Anderson, the worship leader at New Life Church in Colorado Springs, "God's nature is that of healing tied directly to his love and kindness. And 'The Whole Landscape' is about singing the work of healing. . . because God wants to cover, heal and redeem every moment, every missed opportunity, all of creation with his presence. He holds our story with care and meets us right where we are. Sometimes, we can be quick to dismiss or forget about hurts and what caused them, any pain or shame. But God wants to enter our broken places to rebuild and restore, to create a more beautiful thing on the rubble, not sweep it away."

'The Whole Landscape' was produced by Michael Rossback and includes co-writes with Matt Armstrong, Ed Cash, Sarah Reeves, Anthony Skinner, Andrew Bergthold and Christopher Steven Lockwood. Anderson has some strong views about what authentic worship should sound like. He said, "Worship has a dangerous, prophetic, defiant quality. With the song 'Heaven Stands Up' we tried to capture that. . . it's a reminder that as followers of Christ, we carry the presence of God with us. When we walk into a room or a situation, things change. . . or they should! We often realize the value of others to the Kingdom of God but forget we are each unique and there is no replacement for any of us. You don't have to be Billy Graham, you just have to be you. 'Heaven Stands Up' underscores this, reminding us of our authority and our part in the Kingdom story."

Anderson is the father of six, including two adopted children, and he and his wife, Megan, are passionate advocates for families who are walking through the adoption process. In 2009, Jared and Megan relocated to Nashville, Tennessee. Their neighbours had been going on missionary trips to Haiti and in January 2010, the tragic earthquake hit. Jared and Megan prayed for their neighbour and watched them bring home not one but two beautiful little girls from Haiti. Jared and his family went to the airport to welcome them home. "I thought, 'When we are done having our own, we gotta do this'." They watched as the girls had their many firsts. "We had our hearts pricked in a way that would change us forever," said Megan.

In 2010, the family moved back to Colorado. In 2011, Jared and Megan experienced two miscarriages. During the summer, the couple attended the Desperation Conference at their church. The speaker asked everyone to pray and ask God to put a dream in their heart. The Anderson children lined up in the back row of the church. After the prayer, Everett looked at his mom and said, "Mom, we are supposed to adopt some kids from Haiti." Megan's heart leapt when she heard this but wasn't sure how it would all unfold. Jared told her they would plan a trip to the orphanage in Haiti. "We will know when we get there," he said.

In January 2012, Jared and Megan went to Haiti. "The need is so great," he said. They went with the idea they wanted two children younger than their youngest child. They desired a boy and a girl under the age of two but they were open to whatever the Lord had for them. When they arrived at the orphanage on their first trip, Megan said, "There is no way we can pick one of these kids." So she didn't attach herself to a specific child. On the last night, they went into the second room (they spent most of their time in another room of children) and fell in love with John Diego. "But he had toys hanging on his crib and we thought he was already taken," Jared said. Megan encouraged Jared to check the list of available children. His was the only handwritten name on the bottom of a type-written list. John Diego was available! They were told that getting a girl under the age of two could be a wait of up to a year.

After many ups and downs, Jared and Megan trusted God to bring John Diego home. They almost had the opportunity to adopt John Diego's cousin, but the biological father came back to get him. Megan visited Haiti to celebrate John Diego's second birthday. Then they got a call from the orphanage saying they had a little girl named Christine and she was available.

'The Whole Landscape' is set for release on 4th October. His wife Megan and six children also host an annual variety show called Christmas This Year to highlight their local special-needs community.