Jasmine Hurtado: The Latin pop singer with the "Heard About You" hit 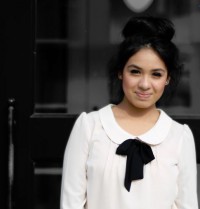 Anybody who's heard Jasmine Hurtado's bubbly dance pop songs "Let 'em Know" and "Heard About You" will have registered that 19 year old Jasmine is a new name on the scene. Yet she's not new. Amazingly, at the age of 11 she recorded her first Spanish language album 'Limpiare Con Tu Vida' (Cleanse Me With Your Life) and far from being a typical pop princess clambering for fame, she is a singer utterly committed to taking the message of Jesus to both English and Spanish speaking teenagers.

Jasmine today lives in Michigan but the rest of her family are based in Texas. She spoke about her early years. "My mom's side is very musical; my grandparents and all of my aunts and uncles grew up in the church as well so they were always leading worship, singing up there, playing instruments and even at family reunions we would all get together and just sing at the house. We were crowded because I have such a huge family, just like any Hispanic family."

She spoke about how she entered the recording world at the tender age of 11. "I just loved music and loved singing. I never had this whole thing like doing it internationally, travelling and doing this for a living - that wasn't really a plan, it just kind of happened. I was just trying to get into a talent show here in Grand Rapids and we needed an instrumental for a song I was going to sing. We met this producer and asked him if he could help us with this song and he was like yeah sure. Later on he heard me and he was like 'hey I would like to work with you and maybe do a demo and we'll see how it goes'. He gave that demo to a few of his friends who had words with artists that were huge in the ministry world and they really liked it. He wanted to continue working with me so we recorded a first album and that's kind of just the way it went. God did the rest. We went into this knowing absolutely nothing, I was just a little girl who wanted to sing. It's been a great journey."

Did the talented singer ever feel drawn towards the far more lucrative field of mainstream music? "Not really, I've always wanted to stick to Christian music and just speaking out about the Gospel, not only that but encouraging youth because in a world like this we need a lot of help and I would love to be an example to them. I'm not perfect, I'm not saying like I'm the greatest Christian in the world but I would like to help people and I would like to encourage youth and just let them know that they're loved and that they are a child of God and that God has amazing plans for them if only they could just walk in his path. Working as a worship leader here at my church I get a lot of that after services. Even if I'm not singing up there or leading worship I'll be walking around after service and I'll get little girls or even adults coming up to me and they're just like, 'I'm tired of this and I just want to live for the lord, I want to give my heart and I want what you have and all these other people here and I want to know what that is.' I've had that and it's a great privilege and an honour to be able to do such a thing. It's incredible to lead someone to the Lord." 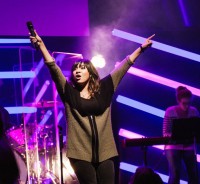 In February 2013, Jasmine released her Spanish single and music video "Nuestro Dios Es Grande" (Our God Is Great). The single was a huge success and was chosen to be part of two different projects, 'Vizion Jesus Volume #1', (Jesus Vizion) and 'Nuhbe Hits 2013'. "Nuestro Dios Es Grande" was also nominated as Best Youth Song Of 2013 for AMCL Awards. Jasmine has shared the stage with many different artists including Ken Reynolds, Juan Carlos Rodriguez and Daniel Calvetti.

Jasmine's Cross Rhythms radio hits come from her 2015 album 'Sparkle' which has also been released by Dream Records in a Spanish language version, 'Brillare', which is picking up airplay across Latin America.

So what about the future? Jasmine commented, "I've really put a lot of thought into what I what to go into and what type of music I want to do in the future. Hopefully there will be some songs with a dance music vibe and I also want to implement some worship as well."

Every year Jasmine travels to different countries on mission trips. It is safe to say she has chosen to answer the call on her life and is willing to be a light for others to follow. She continually tells others, "Always follow your heart and desires, knowing that nothing is too big nor will it ever be too big for God. He wants to use you in extraordinary ways for his glory."