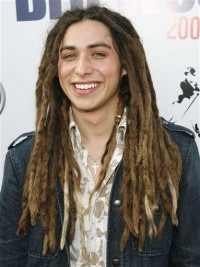 Of the dozens of singers American idol has propelled into the CD racks, one of the most talented is acoustic folk-pop singer Jason Castro. The self-confessed dreadhead was the fourth finalist in the seventh season of the notorious TV talent search. Jason was subsequently signed by Atlantic Records which released his self-titled debut album last year.

Born in Dallas on 25th March 1987 and raised in Rowlett, Texas, Jason's parents Rene and Betsy Castro are Columbian. Jason was the first in his family to be born in the USA. Spanish was his first language as a child. His home was very much a Christian one. A key moment in his teenage life was when he attended a summer camp at which the David Crowder Band were playing. He told cbnmusic.com, "That was definitely kind of the turning point, like a spark in my life. I grew up in a Christian home and always knew about God, but that's kind of when it became personal to me. And it has been a long road since then. It's been exciting. All throughout American Idol and beyond that, everything has been about going to God and praying. Even with music. . . I grew up playing drums and I was in a pretty serious band. I quit my band just to go to school and try to figure out what did God want from my life. I felt like at the time I really wasn't sure if I should get into music. I felt like I was wasting an opportunity at school by playing too much music. So I let music go for a second, and it came back bigger than I could have imagined with this. It's been a really cool journey in faith."

Castro grew up playing drums and taught himself to play guitar while at college. Although he'd sung only five times in public, mostly during church services, Castro auditioned for American Idol in 2008 in Dallas singing the Ray LaMontagne version of the song "Crazy". He was not shown on the television series until the final 24 due to legal restrictions on the songs he chose to perform. During a March 17, 2008 appearance on The Oprah Winfrey Show, judge Simon Cowell chose Castro early as one of his four favourites in the competition. Castro was the first contestant in the history of American Idol to ever play an instrument on the American Idol stage. He played the guitar during the Top 24 performance night when he sang Lovin' Spoonful's "What A Day For A Daydream". He was also the first contestant to play the ukulele on the show. He played the instrument while singing "Over The Rainbow", after learning to play it in less than a week. Castro also sang in three languages on American Idol, supplementing English songs with Spanish (a combination of Sting's "Fragile" and "Fragilidad" on 25th March 2008) and French (Paul McCartney's "Michelle" on 12th March 2008). Before he was eliminated, Castro was in the bottom three only once. He was voted off the competition on 7th May 2008.

After his elimination after singing Dylan's "Mr Tambourine Man", a rumour circulated that Jason had purposely messed up the lyrics to get eliminated. He told mtv.com, "I definitely did not do that on purpose. I couldn't believe I forgot such a popular line, something that's, like, written on your soul. Somehow it slipped my mind, but I definitely didn't do it on purpose."

After his elimination Jason made appearances on literally dozens of US TV programmes and returned to the American Idol stage for the season finale, singing Leonard Cohen's "Hallelujah". Then he completed an American Idol LIVE! Tour in 2008 before signing with Hard 8 Mgt, a firm that manages acts like Jakob Dyland and Dashboard Confessional. His self-titled album was released by Atlantic in the US on 12th April 2010. On the album he also worked with DioGuardi, Guy Chambers, Martin Terefe, Dave Lichens (a member of The Heavy Steadies), Jason Reeves, Sacha Skarbek and Espionage. Fellow Atlantic Records artist Serena Ryder appears with Castro on the duet "You Can Always Come Home".

After the appealing romantic pop songs 'Jason Castro' Atlantic decided to make a pitch at the CCM market and released the EP 'Who I Am'. That contained "I Am Second", a bold song of faith. In the video for the song Jason talked about wanting to work for God's glory but not necessarily singing worship songs. In another interview he made reference to Philippians 4:8 while the song "You Are" sounds worshipful. He was asked whether this was intentional.

"It definitely was intentional in both aspects. I did mean it to be worshipful and I also meant for it to be something that went in line musically with the rest of my debut album and not just some left turn. I don't want people to think I'm becoming this whole new person. This is just where God has led my songwriting. There is a difference between a worship leader and an entertainer, whether it's Christian entertainer or whatever. But I felt at the time that I was meant to be an entertainer. There is a lot of misconception out there that I was a worship leader before, and I really wasn't. I grew up playing drums and started singing in college. [I only sang] five times in public before going out on American Idol. Half of those times were in church, but I was more in the background. Definitely, there's a piece of me that loves the idea of being a worship leader. Only time will tell whether I do. Right now, this is what I've got."

Jason remains my favorite person to come out of American Idol. I met him in person and he is just as down to earth, sweet and sincere as he seems on TV. I hope he has a long and successful career in the music industry wherever it leads him.