The song "Why Should You Go Back" by JENI VARNADEAU reached number one on the US Christian rock charts and is currently hitting the airwaves on UCB Cross Rhythms. Mike Rimmer gets her true life story...eventually. 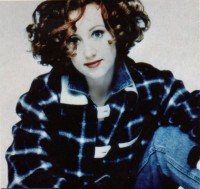 It's not often that a Christian artist lies to you. I mean, blatantly lies. But then Jeni Varnadeau does have a mischievous sense of humour. As I discovered to my cost! I have to admit it was all my own fault. Talking with Jeni's record label Pamplin I joked with their media liaison executive. Debbie Barnett that I wanted to interview artists who had amazing testimonies. What I didn't know was that the fictitious testimony, which I invented as an over the top example, would be passed on to Jeni.

Taking advantage of the opportunity to set up your hard working scribe, when I asked the redhead singer about her life, she replied, "My mum, when she was pregnant, was banged up in prison. So I was born in prison and sent away to be adopted. Then my mum was saved because of a really cool prison ministry. I was brought up in a foster home and then when I was a teenager I wanted to go and find my mum. I found her and we actually got to meet on the Oprah Winfrey show. As a result, she led me to the Lord, so I got saved through that.

And then I got asked out by Greg Long." As she went through the story, you'd think that I would recognise my own invention and rumble her. You'd think that, wouldn't you? But you'd be wrong. It was only at the mention of Greg Long that finally the truth slowly dawned on me. The penny dropped that I was set up! Jeni laughs and admits. "No - none of that is true!" Ho hum. I try to sound stern. So Jeni, do you often wind up journalists who interview you? "Wind them up?", she queries. "I guess that's a kind of British term, for like heckle with you. Well, you know I can only do that with certain personalities, and if I know somebody's on the goofy side then I can try to get away with it." I try even harder to sound stern. So your record company told you that I was on the goofy side! Jeni begins to sound slightly worried. "Just a little bit, just a little on the edge, so we thought I could mess with you a bit." Clearly a sense of humour helps if you're going to be a Christian music artist and in this case if you're a journalist!

I pause while I stop the tape and Jeni makes sure she hasn't offended me and then I get the chance to do what I really want to do, find out more about the woman responsible for one of the best debuts this year, 'Colors Of Truth". Musically, the album to my ears has a bit of an Alanis Morissette feel and I wondered if she was fed up with the comparison. "I've heard that comparison a lot," she says, "and it just kind of makes me laugh because I really do not listen to a lot of her music and I think it was just a kind of a coincidence thing, 'cause I just tried to put me down on tape -1 didn't try to be anyone else. I listened to her album probably about four or five months ago. I listened to it the whole of the way through - it gave me a headache, and I was like, "Oh man! I hope I don't give people headaches!'" Jeni laughs and continues candidly, "She's got a really piercy, nasally voice and I have a nasal tone, so I'm kind of similar to her but it definitely was not a planned thing at all."

The one song that has been played most on the radio is "Why Would You Go Back?" so that seemed a good place to start. Jeni explains, "My husband Rory helped me write that song and we weren't married at the time. It's a parable song. As Christians we tend to get comfortable with where we are and just because things are familiar, we think that's how things are supposed to be. We often get comfortable with things that we shouldn't really get comfortable with and a lot of times we get comfortable with our sin. and we keep going back to those things that weigh us down and we're carrying around guilt and burdens and shame. Christ came so that we can have abundant life, new life, and he tells us that we can be new every morning, we can have a new heart. So this song is to encourage people to move forward because the past is the past, it is no longer part of our life, so just press forward."

As for Jeni's own past (her true one), she grew up in Albuquerque, New Mexico. She recalls, "I grew up in a Christian family and they took me to church every Sunday. When I was little I wanted to know all about the Bible stories I was learning and I wanted to learn everything I could, not necessarily because I wanted to know about God, but because 1 wanted to be right and to be the one that the teacher would pick to give the answers."

Jeni continues, "When I was seven years old, my older sister shared the Lord with me and told me about how I could have a personal relationship with the living God and what a difference it had made in her life, and I could see that she didn't just know about God, that it wasn't just a head knowledge. We were just at a friend's house and that night I prayed and asked Jesus to come into my heart and even though I was young, I knew that I wanted to commit my life to the Lord."

Jeni's musical talents were fostered in the church where she started singing shortly after she was saved. It seems that she's always wanted to minister and sing Christian music as a career. With the help of a supportive family and some part time jobs, Jeni survived the search for a record label, writing and demoing songs, some of which ended up on her debut.

Not all the songs are based on life experiences but "For My Good" was born out of Jeni's relationship with her husband. She recalls, "It was during my dating relationship with Rory and we had an on and off relationship for three and a half years. We broke up three times in three and a half years and because we had this soap opera relationship, our friends didn't know from one week to the next whether we were on or off, so it was a very up and down relationship. During the writing of this album, we were in the middle of our third break up. It was very frustrating because in my head and in my heart I thought that this was the guy that God wanted me to marry but he wasn't ready at that point. The circumstances were not matching up with what I thought God wanted for my life and it was a very hard time and God really used it. Those times are so hard and painful but at the same time it was one of the sweetest times, because Jesus was all that I had! Every time that 1 would hurt, I would go back to him and say, 'Okay, here I am again God, knocking on your door and I'm just bringing that to you and I'm letting you know that I hurt, knowing that you'll take care of it."

Jeni continues, "He just gave me a peace and during the six months that we were broken up, God not only worked in Rory's life, but he also worked on his mum and I'm so thankful. I didn't even know that that had to happen. I don't think that she planned for her son to grow up and marry a rock singer who wears clunky boots with dresses. They're from Southern Louisiana, very southern - I'm just not the typical wife that she would expect for her son, so God even worked on her heart in that time." God worked things out and the happy ending is that Jeni and Rory got married!

For many people, the first few years of marriage aren't always easy and being a singer isn't the most stable of environments, is it? "Oh no, but we both feel called to it and we're very supportive of each other. I don't think I could have married someone with a real job 'cause I don't think they would understand. Because my husband's a musician and he doesn't have a real job either, his life is flexible, so that if he's not doing a gig on his own then he has the flexibility to come with me and we have fun."

Jeni's searing 'Colors Of Truth' album was produced by CCM hit makers John and Dino Elefante. It's been huge in US Christian radio and is now getting UK exposure (UCB presenter Martin Purnell recently called "Why Should We Go Back", "the best track of the year") all systems are go for Jeni. With such a strong debut album under her belt, it looks as if Rory is going to have to learn to be very flexible because Jeni's career is deservedly on the up.