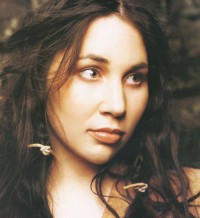 Canada's small but vibrant Christian music scene has produced a stream of artists who have gone on to make an impact in America and beyond. Now another one is likely to join them as the wistful folk pop styling and eloquent lyrics of Jill Paquette start being heard on Christian radio. Singer/songwriter Jill's self-titled album was produced by Steve Rendall (Matt Brouwer) and Phil Madeira (Rich Mullins) and released by Reunion Records (Authentic Music here). Said Jill, "The making of this album, from the writing to the travelling, has been such a valuable experience for me. What has made this so worthwhile is the work God has done in me through this opportunity. Through the songs and the album, I have been able to see that God works all things for his purposes."

The album Jill Paquette has already produced considerable critical acclaim. Russ Breimeier of Christianity Today magazine enthused, "Jill displays an impressive range that combines the folk pop intimacy of Jewel, the rock edge of Sheryl Crow, the thoughtful inspiration of Sara Groves, the fragile honesty of Ginny Owens and the ethereal heights of Sarah McLachlan. Combined with her skills as a guitarist/pianist and her clear and earnest voice, she's sure to be regarded as one of this year's breakthrough artists in Christian music."

Jill grew up in a very musical family in the small town of Houston, British Columbia. She first played piano at the age of three, soon after beginning classical lessons that would extend into her adolescence. Inspired by her father and her older brother, Jill also developed a love for the acoustic guitar over the years. Surrounded by music, she naturally developed a love for sharing her heart through singing and songwriting. But it wasn't until her freshman year at Alberta's Prairie Bible College, when her friends prompted her on the spot to debut her talents at the local coffeehouse, that she finally sang before an audience. A single song on a borrowed guitar was enough to wow them, leading to an opportunity to play in the worship band of her classmate, Matt Brouwer. The rest is history - playing a prominent role on Matt's own solo debut (2001's Imagerical), performing her own solo concerts and eventually recording her own demo before eventually signing with Reunion Records - all while finishing her collegiate studies.

One of the best songs on Jill Paquette is "Come To Me". Jill went over the origins of her composition, "It was written after talking with a friend and fellow musician who was struggling with his faith. His personal relationship with God had always been inspiring to me, so when I heard the questions he was asking, it shook me a bit. But then I realised that no matter how hard the questions we ask or how difficult the situations we face, they don't change who God is. And his call to us is always the same, 'Come to me.'"