Jillian: The ex-fashion model from the US turned singer

American singer JILLIAN became a friend of Karla Faye Tucker who in February became the first woman to be executed In America since the Civil War. Heather Bellamy reports. 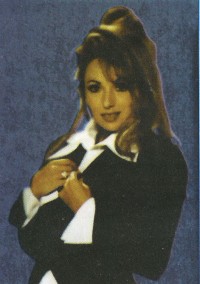 We're not just performers, we're not just entertainers, it's just a very artistic way of connecting to the heart." The way about which singer Jillian is talking is the re-enacting of some of the traumatic experiences from her life in her concerts through rock music, drama and testimony. Jillian is an ex-fashion model from Beverley Hills, with the gentleness and compassion of the heart of Jesus, which leads her to minister in a diverse mixture of places such as nightclubs, churches and prisons. One of the most powerfully emotive pieces in Jillian's concerts is when she shares through testimony and song about her brother Johnny.

Abandoned on the streets of LA as children, Johnny and Jillian were thrown from foster home to foster home, placed in the 'care' of others, but treated inhumanely. It is a story of abuse -verbal, physical and sexual. Their only comfort was each other, yet in one of the foster homes the heartbreaking decision was made to separate them. Johnny stayed with the foster parents and Jillian was left with the grandparents of the family. On each visit back, Jillian would be locked in the car and told not to move. And there she would sit until Johnny, sneaking out of the house, would place his hand against the cold window of the car, fingers spread. Jillian would meet his hand with hers in an attempt for intimacy and contact with each other.

Late in 1997 Jillian and her husband Rob, who looks after Jillian's sound and stage management, were invited to minister at Texas State prison. Remembers Jillian, "I went in to death row the morning after I'd given a concert at the maximum security section of the prison. That night was the first time in the State of Texas (history was made) that the executive warden for the entire State wanted my concert to be satellited into death row. Eight girls got to see my concert for the first time." Amongst the women on death row was prisoner 777, a lady by the name of Karla Faye Tucker. Karla was a murderer. Her life had been a long harrowing road of abuse and sin. From 10 years old, Karla and her mother would share heroin like lipstick and by 11 this had developed into prostitution. In 1984 the 24 year old Karla and her lover Daniel Garrett got high on tequila, rum, methadone and heroin. They broke into the apartment of a young couple, Deborah Thornton and Jerry Dean, and, with no mercy, hacked them to death with a pick axe, oblivious to the cries of agony and pain. The sole motivation for this most ghastly of murders was apparently that Jerry Dean had previously spilled oil on Karla's living room carpet. But there is really no logical explanation for this horrific act of violence.

Karla Faye Tucker and Daniel Garrett were convicted in April '84 and both received the death penalty. For the first year of her stay on death row in Gatesville, Texas, the sacks full of mail Karla received were hate mail. But gradually the public forgot about her and she was left alone to the confines of her cell. A few years into her sentence Karla reached a point in her life, through the ministry of the Family Life Tough Love church, where she was able to surrender her life to Jesus. Her conversion and transformation over the following years was tremendous. Once so bound by sin, she embraced the forgiveness of Christ and the freedom that comes in that. Her focus in life had changed and in that, she took up a long-term correspondence with a 'father figure' Quaker elder in Torquay. Karla also made video messages targeted at young people, telling them not to take drugs. And in 1996 she married chaplain Dana Brown, who had begun visiting her as part of Mike Barker Prison Ministries. But still the wheel of "justice" rolled relentlessly on. Despite protestations from leading Christian ministries and Christians worldwide, Karla's execution, by lethal injection, was set for February 3rd, 1998.

It was on the day after Jillian's concert that the singer went in to meet the prisoners on death row. "Death row was on a separate area in the grounds of the prison, but it was a private area. It was all completely fenced in with the high wires and even within itself it was completely isolated and it looked like a one-story level house. Inside I could see eight wired tiny cells like eight cages, back to back right in front of me. You could tell this was death row because it didn't look like jail. It looked like a compound for murderers. You can feel what it is...it makes you sad because it looks so dehumanising."

Jillian's first sight of Karla was in her own words "startling". Karla was in her cell and had placed her hand on the wire grill, with her fingers spread wanting Jillian to come and make that physical contact with her. As Jillian walked through the door into the death row facility Karla called out, "Jillian, Jillian, over here, over here. When Jillian looked around and saw Karla with her hand outstretched against the wires, the memories of her brother Johnny, all those years ago, came flooding back and in the emotional turmoil Jillian collapsed on the floor.

There was an immediate bonding between the two women. Karla was, in Jillian's own description, a woman that simply "glowed of the Lord." Jillian found that to speak with her was "very godly, very beautiful, very soft, very gentle. You could not imagine the hideous crime that she had committed 14 years earlier." Karla was a woman who knew the healing and restoration of the forgiveness of Christ.

The life that was within Karla was something which she gave to others. She was "like the mother on the unit" to the other women on death row and even "to the guards her representation of the Lord showed that you couldn't help but know who Jesus was, who her Father was." Karla herself stated in the Daily Mail earlier this year that "my case has given me a window of opportunity to show the life that Jesus Christ has given to me, a life that I want to give back to others."

The conditions for Karla on death row were pretty grim. Explains Jillian, "Karla was only allowed out of her cell every other hour, she could chose to come out or stay in. The surrounding area was like a living room where they would congregate and they would sew, make crafts and read. The space of their cell was big enough for a little mat, a toilet, a sink and that was it. It was a little, tiny cubicle."

A few weeks after Jillian's prison concert, having returned home, Jillian and her husband Rob received a letter from Karla.

Dear Jillian,
This is Karla, the girl you met on life row while you were here in Texas at the Mountain View Unit. Both you and Rob were such a blessing to me, the way you brought the life and love of our Lord and Jesus over here. You hugged all of us, fellowshipped with us and with all the others on this unit. May God take those seeds of love you sowed the last few days and cause them to bear good fruit from here on out. May it come back to you one hundredfold in blessings and be credited to your account in Heaven in Jesus' name... Jillian, I want you to know this for sure, just as I said to you in hugging you goodbye as you were leaving. I'll surely see you again one day! Here, out there, or when we get home! Either way we will praise the Lord together again some day. You both absolutely glowed with the light of Jesus and I know you touched many lives while you were here. Thanks for coming, you're making an eternal difference. As I close I send you both another hug and a hug to your baby son Sage, and I pray that your Abba Father will cause you to feel Him this day draw you up to his bosom and give you one of his hugs as you hear his voice gently say to you, 'I love you, my child.' In His love Your sister, Karla Faye

The interest in Karla Faye Tucker intensified all over the world as it became increasingly obvious that the State was indeed going to go ahead with its intention of executing Karla. An unprecedented surge of television and newspaper coverage brought parts of Karla's Christian testimony to the attention of the general public, as she was to become the first woman to be executed in America since the Civil War. And then on 3rd February, Karla was put to death by lethal injection. Her final words before the injection took hold were, "I'm going to be face to face with Jesus now." .

Karla has died but her memory lives on. In May this year Jillian is to go back to the death row unit in which Karla lived for so many years and film a tribute video which will be on sale throughout America. It will include footage of Karla and her life amongst songs performed by Jillian.

For more on Jillian visit the Jillian artist profile