Jim Bullard: The singer/bass player from the US

A track from the solo debut by Glad's JIM BULLARD is getting heavy UCB Europe exposure. Tony Cummings reports. 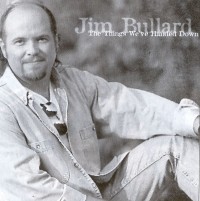 The name Jim Bullard may be new to Christian radio listeners but as a member of Glad - the veteran group whose acapella albums have enjoyed huge US sales - Jim has moved in the upper echelons of American CCM for seven years. But now it's the singer/bass player's debut solo album 'The Things We've Handed Down", for new US independent, Genesis Records (distributed in the UK by Spirit Music) which has brought forth the turntable hit "Nothing Else". As Jim continues his work with Glad, his own distinct musical personality is emerging in the nightly, solo opening segments with the band. In fact, it was Glad's leader, Ed Nalle, among others, who helped nurture the seeds of a solo project that had been in Jim's mind and heart for some time.

"I had been entertaining the idea of my own project in only a general sort of way," Jim recalls, "when one day, on the bus - out of the blue - Ed told me what a good idea he thought that would be. That gave me some important encouragement and I began to approach the idea as a tangible reality." That reality took a giant leap forward when Jim hooked up with Lane Smith, president of Genesis Records, and a noted instrumentalist, arranger and producer renowned for creating and distributing musical performance tracks to Christian bookstores across America. Lane was excited at the prospect of working with Jim and the collaboration that resulted in 'The Things We've Handed Down' was soon under way.

The album features some of Nashville's finest musicians known for their work with some of the industry's biggest names, including guitarist Tom Hemby (Amy Grant. Michael W Smith), lead guitar wizard George Cocchini (Clay Crosse, Phillips, Craig & Dean), and Carl Albrecht on drums (Kim Hill, Phil Driscoll). Together with this formidable arsenal of talent, Lane and Jim have created a work that's I vibrantly contemporary yet clearly accessible to the inspirational audience. Special standouts for Jim, on an album filled with memorable moments, include the title song, a gorgeous and profoundly moving ballad.

"It's not a stereotypical Christian song," says Jim, "but it speaks with a lot of wisdom and heart about the things we pass onto our children and our love for them. It touches strongly on what I believe any Christian parent would hope and pray for their kids, and I think it sets a theme and tone for the entire album." For UCB listeners the ear-catcher is his delicious duet with praise and worship veteran Kelly Willard on the stirring ballad "Nothing Else". There's also a bit of pop rock on "The Mercy Seat".

"This song really does rock," Jim says, "and it has to. It talks about how we all as Christians are fallen and we shouldn't have any illusions about that. We need to be constantly running to the mercy seat, seeking God's forgiveness and grace. That's a challenging realisation and it needs that hard edge musically to really convey its message."

"The Man I Meant To Be" is a powerful ballad that again resists easy formulas to present the real life struggles and failures of Christian life. "I know that 1 fail and fall every day," Jim admits, "and I really relate to a song that lays that out in a totally honest way. Still, it has some light at the end of the tunnel, because it's ultimately a plea, for the Lord to help me find the man I am meant to be.

Jim was born and raised in Alton, Illinois, directly across the Mississippi River from St Louis. Brought up in a solid church going family, Jim was surrounded by both music and the Word. His earliest musical memories drift back to hymns and southern gospel quartets, which he heard regularly both at home and in church. Jim even recorded an album with his brother at age 12, but hearing gospel titan Andrae Crouch as an early teen awakened Jim to the broader horizons of Christian music and began to seriously stir his sense of a personal calling to a life of music.

Sunday night visits to a local Church Of God In Christ were Jim's first exposure to an African-American Christian worship experience and led to some of Jim's early performing experiences as the congregation embraced both him and his talent with open arms. Having picked up the guitar, Jim began his odyssey in earnest by forming a popular duo in high school that performed a repertoire of mostly original material. After his graduation, Jim filled the next decade with stints in a number of popular national and internationally touring bands, including Living Sound, the Spurrlows, September and the Paul Clark Band.

Jim married his wife Linda in 1984 and began a family a year later with the birth of the first of the couple's four children. Realising that constant life on the road could never coincide with his responsibilities to his family, Jim settled into a staff position at his home church in St Louis while also keeping busy as a sought after session singer and bassist for Hosanna/Integrity Music and numerous other major label projects.

When Glad beckoned in 1990, Jim found the perfect balance between a reasonable touring and recording schedule and a happy, healthy home life. As he takes the first steps into the newest phase of his ongoing journey of music and ministry, Jim already has his eyes set on who he is and what he hopes to accomplish.

"Being the father of four kids, and married to the same woman for 14 years, I see more clearly than ever the way the evil in this world tries to chip away at the strength of families...mothers, fathers, sons and daughters," Jim concludes. "I want to present my own vulnerability and struggles, but in that honesty hopefully establish enough credibility to also assure people that there is hope. There are answers, and there are happy endings. And it's all through giving ourselves over to God."

Looking for a song from Jim Bullard ,I will change your name